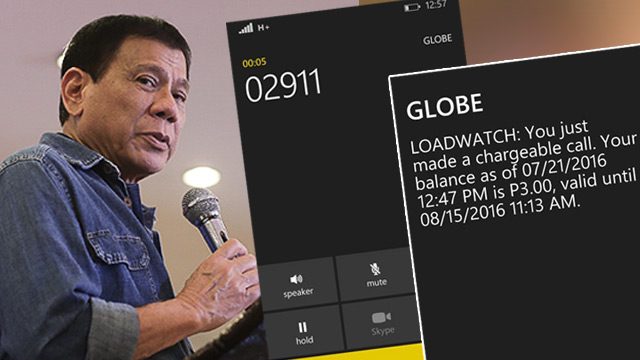 Sueno called 911 and requested police assistance at the National Telecommunications Commission (NTC) building, where he was having a meeting with representatives of telecommunications companies, the Philippine National Police (PNP), and the Bureau of Fire Protection (BFP).

Members of the public were also able to use the 911 emergency number but were routed to the Patrol 117 emergency contact center.

The 911 emergency number, which is scheduled to be launched on August 1, will replace 117, currently the official national emergency number. The 24-hour service would be manned by officials of the Presidential Action Center (PACE).

The hotline had proven effective in Davao City to ensure the speedy response of police, firefighters, and medical personnel during emergencies. President Rodrigo Duterte, the city’s former mayor, has wanted to replicate the same system all over the country. – Rappler.com