What a Trump presidency means for the climate

Nov 10, 2016 9:26 AM PHT
Renee Juliene Karunungan
Facebook Twitter Copy URL
Copied
While the US certainly has a long way to go in meeting the amount of carbon emission mitigation that is expected of them, a Trump presidency may reverse the efforts already done by the Obama administration 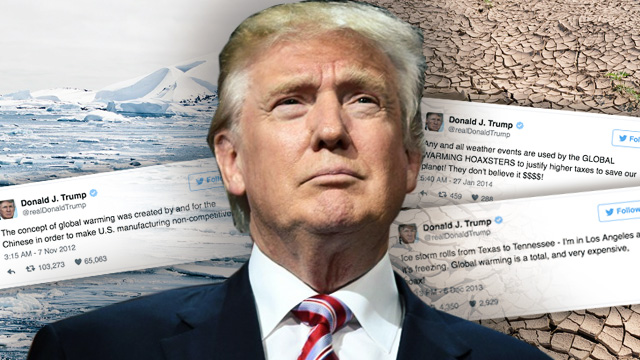 MARRAKECH, Morocco — Donald Trump won the United States presidential elections on the third day of the 22nd Conference of Parties (COP) to the United Nations Framework Convention on Climate Change (UNFCCC), an annual meeting of 196 countries to discuss how to prevent man-made climate change.

This is the first conference after the Paris Agreement was signed in December 2015 and after it officially entered into force last November 4, with 100 countries ratifying the agreement. (READ: 8 reasons why PH should honor UN climate commitments)

A Trump win has worried many environmentalists and climate justice activists, especially because Trump has been known to criticize the Paris Agreement and has made statements to “cancel” it. He has also been supportive of the fossil fuel industry. He has also called climate change as a hoax made by China.

The United States and China, two of the biggest country emitters, have both ratified the Paris Agreement last September. Formerly, the United States bailed out on the first climate treaty which was the Kyoto Protocol under the president George Bush. The Kyoto Protocol has then been seen as a failure. The Obama administration, on the other hand, has been more supportive of climate action and has had efforts such as the “Clean Power Plan” which seeks to mitigate carbon emissions from coal-fired power plants.

While the US certainly has a long way to go in meeting the amount of carbon emission mitigation that is expected of them, a Trump presidency may reverse the efforts already done by the Obama administration.

While many are worried, Segolene Royale, French environment minister and president of COP 21, assured that the United States cannot withdraw from the treaty easily.

“The Paris agreement prohibits any exit for a period of 3 years, plus a year-long notice period, so there will be four stable years,” she said.

Other organizations also urge the new president to take the Paris Agreement seriously.

Jean Su from Centre for Biological Diversity shares the same sentiments adding that “one man alone, especially in the twenty-first century, should not strip the globe of the climate progress that it has made and should continue to make.”

The United States and China have both been crucial in the success of the agreement at COP 21. Both are also seen as key countries that need to do their share of work if the world is ever going to hold global warming at 1.5 degrees Celsius, which countries have agreed on last year.

However, with the Trump presidency now in place, all seems a bit more uncertain. With global temperatures only continuing to rise, Annaka Peterson of Oxfam America has a reminder for us all: the world won’t wait for the US and neither will the climate. – Rappler.com