CHARLIE ALERT for LGUs: What to do before #NinaPH’s landfall MANILA, Philippines – The Department of the Interior and Local Government (DILG) raised on Saturday, December 24, alert level Charlie in Metro Manila and 13 provinces that are in the path of Typhoon Nina (international name: Nock-Ten).

The alert was raised as the storm continues to strengthen before making landfall.

According to the DILG-Central Office Disaster Information Coordinating Center (CODIX), the following provinces will be within the 100-kilometer radius of Typhoon Nina’s forecast track:

Alert level Charlie is based on Oplan Listo (Operation Plan Alert), a disaster preparedness manual that provides mayors and other local government disaster management agencies a checklist that enumerates what should be done before, during, and after typhoons.

This checklist seeks to “minimize mistakes that may cost lives and grave destruction to properties.” It includes flowcharts that correspond to 3 phases of critical preparedness actions – Alpha, Bravo, and Charlie. It also provides a tropical cyclone information board and reference boxes and minimum actions to guide mayors. 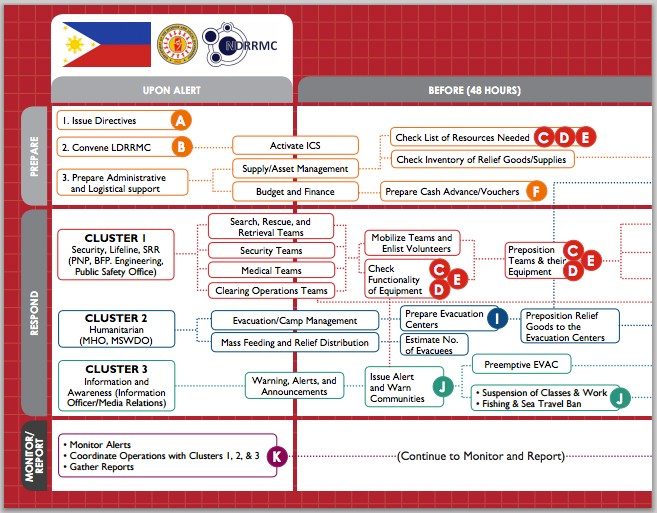 Meanwhile, DILG-CODIX has raised alert level Bravo in the 13 provinces which will experience moderate rains and be within 300 kilometers from the forecast track:

Light rains are also expected in areas where alert level Alpha is in place – 450 km from the storm track.

Potential damage due to severe winds in all affected areas are listed as follows:

The 1991 Local Government Code and the Philippine Disaster Risk Reduction and Management Act of 2010 mandate local government units to be at the frontline of emergency measures during disasters. – Rappler.com

Be a Project Agos volunteer for Typhoon Nina.