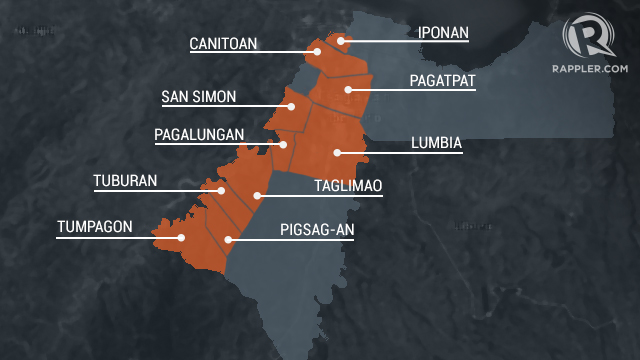 Local authorities ordered forced evacuation in the following areas that are prone to flooding,

The city council declared Cagayan de Oro under state of calamity before dawn Tuesday, January 17, after the streets were submerged in neck-deep floods triggered by the nonstop rains Monday afternoon.

The Department of Social Welfare and Development (DSWD) reported on Monday night that its field office in the region is closely coordinating with the Cagayan de Oro City Disaster Risk Reduction and Management Council (CDRRMC) to identify the evacuation centers that were opened and the number of evacuees that need assistance.

According to the Cagayan de Oro social welfare and development officer Teddy Sabugaa, the city has opened at least 3 evacuation centers:

Below is the list of other open evacuation centers:

As of Monday night, at least 31 families from from Barangay Canitoan have been affected by the flooding. At least two houses in the barangay were totally damaged, while 29 others were partially damaged due to flooding, the City Social Welfare and Development Office (CSWDO) reported.

In Barangay F.S. Catanico, 20 families were affected by flooding.

It has been rainy in various parts of the country due to a low pressure area (LPA) in Mindanao and the tail-end of a cold front affecting the Visayas.

In a bulletin issued 5:00 pm on Monday, January 16, state weather bureau PAGASA said the LPA is in the vicinity of Kabasalan, Zamboanga Sibugay.

On Tuesday, moderate to heavy rain is expected in the Visayas, the regions of Northern Mindanao and the Zamboanga Peninsula, and the province of Palawan. Those areas should be on alert for floods and landslides. PAGASA warned. – Rappler.com