Sep 19, 2017 3:58 PM PHT
Rappler.com
Facebook Twitter Copy URL
Copied
Under the proposed measure, owners of private vehicles should secure children in a child restraint system while in transit on any road, street, or highway 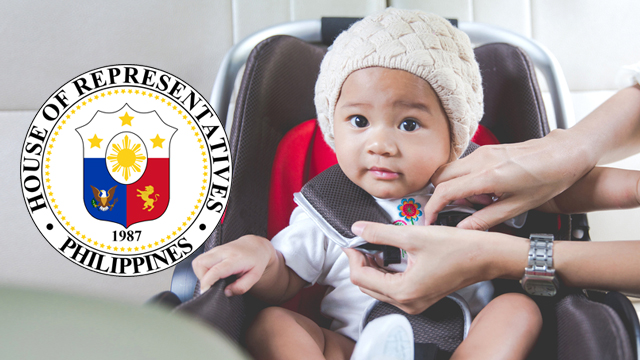 MANILA, Philippines – The House committee on transportation has approved a bill requiring private vehicles to install car seats for children.

The comittee vote  11-2 to approve the proposed measure on Monday, September 18. The still unnumbered bill is the consolidated version of House Bills 1319 and 5595.

The proposed Child Safety in Motor Vehicles Act of 2017 states that it is the policy of the state to ensure safety of children in any form of motor vehicle while in transit.

Buhay Party-list Representative Mariano Michael Velarde, the principal author of the bill, said that while Republic Act No 8750 or the Philippine Seat Belt Law requires the installation of seat belts in front and back seats of private vehicles, it “does not require the use of child restraints or devices for young children on board.”

According to Catanduanes Cesar Sarmiento, chair of the House committee on transporation, proposed measures requiring the installation of child safety seats are the only pending road safety measures in Congress. (READ: What laws help keep road users safe in the Philippines?)

Sarmiento, a co-author of the bill, said, “In its Health Policy notes, the Department of Health stressed that among children 0 to 17 years of age, road crashes are the second leading cause of death next to drowning.”

Under the proposed measure, owners of private vehicles should secure children in a child restraint system while in transit on any road, street, or highway.

The bill prohibits children under 12 years old from occupying the front seat. Under the proposed measure, children must be accompanied by adults all the time.

It seeks to mandate the Department of Trade and Industry to base the approval of child restraint systems to be sold and used in the Philippines on standards mandated by United Nations Regulation 44 and 129.

It also seeks to mandate the DTI to conduct a mandatory testing of all locally manufactured restraint systems and to certify imported ones.

Under the proposed bill, drivers of private vehicles will be fined P1,000 for the first offense, P2,000 for the second offense, and P5,000 and one-year suspension of driver’s license for the 3rd and suceeding offenses for the following violations:

Drivers will also be fined P1,000 for the first offense, P3,000 for the second offense, and P5,000 and one-year suspension of driver’s license for the 3rd and suceeding offenses for the following violations:

Tampering or alteration of the PS mark or the ICC sticker will be punished with a fine of P50,000 to P100,000 for each product as provided under Republic Act No 7349 or the Consumer Act of the Philippines.

In the Philippines alone, an average of more than 600 children died in road crashes every year from 2006 to 2014.

A child car seat system, built for children from 0 to 12 years of age, is designed to reduce the risk of injury in the event of a collision by limiting the mobility of the child’s body.