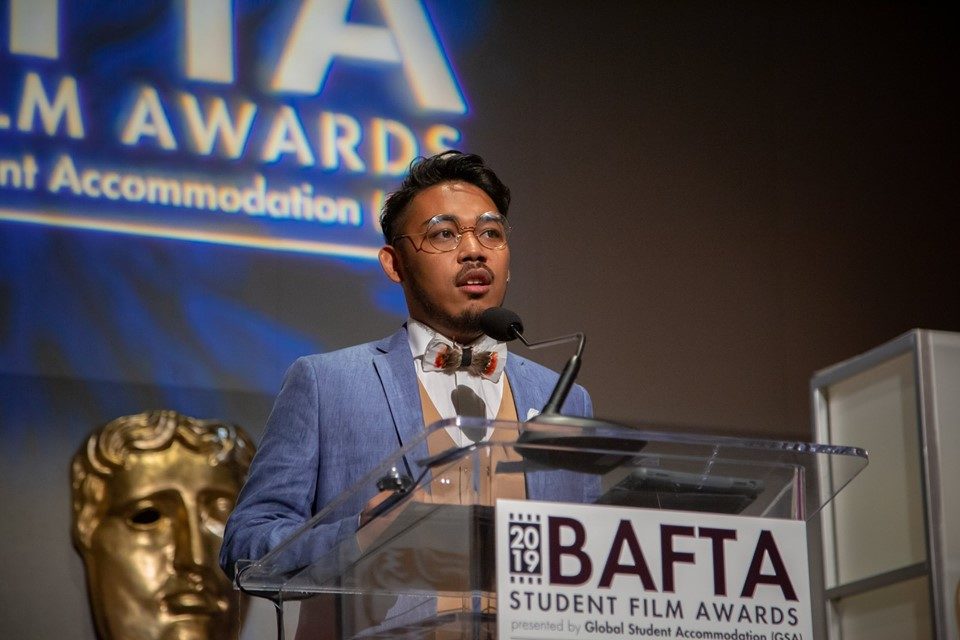 But Del Rosario surpassed boundaries with his new documentary after being recognized by the British Academy of Film and Television (BAFTA) and the Global Student Accommodation (GSA).

Calling the achievement a “truly life-changing moment,” Del Rosario was awarded as one of two winners of the inaugural Short Film Commissioning Grant of BAFTA-GSA at the Broad Stage in Santa Monica, California, on July 9 for his documentary I’m Okay (And Neither Are You). Lola Blanche Higgins was also awarded for her short film Kissy and the Shark.

The BAFTA-GSA Commissioning Grant was launched in 2019 with a theme focused on raising awareness of mental health and well-being among 15- to 25-year-olds.

Del Rosario’s documentary takes off from his personal experiences, similar to his coming-out documentary film In This Family, which was shortlisted in the 2018 BAFTA Student Film Awards.

I’m Okay (And Neither Are You) traces Del Rosario’s yearlong recovery from sexual assault trauma – an experience that eventually led to suicidal thoughts.

Documenting the strain that sexual assault brings not only to its victims but also to the people around them, the film captures how Del Rosario’s trauma affected his boyfriend’s mental health as well, and follows the journey of overcoming trauma from the perspective of a couple.

“In the early stages of developing this film, I thought that it was just gonna be a film about my mental health and how I have a hard time opening up to people. Upon filming my everyday life, I started to realize how my trauma was affecting my boyfriend,” he said.

Struggles to get help

Del Rosario shared how he faced a number of obstacles that hindered him from opening up to friends and family in the Philippines.

Among these were gender bias, and the dismissal of trauma, with religion and prayers being considered as serious remedies. It was also especially hard for him as a gay man to tell people about his trauma for fear that they would turn a blind eye to his experience and label it as a dramatic act to get attention.

Although therapy might have seemed the most ideal response to Del Rosario’s trauma, he was held back from seeking professional help because of the stigma surrounding mental health and the financial costs that come with it.

Del Rosario eventually realized that his trauma wasn’t something he could just simply ignore.

“If I don’t address it openly, then I’m just gonna be throwing all of this burden to someone who I care about,” he said.

Until now, sexual assault is not often talked about, especially when it involves male survivors. (READ: The many faces of sexual harassment in PH)

Research says that at least 1 in 6 men have been sexually abused or assaulted, though this is a low estimate since these cases often go unreported.

Help is out there

Anchored on the journey to recovery, Del Rosario said telling people when you’re not okay serves as the overall message of his upcoming documentary.

“The truth is that we are not these strong beings that can solve things on our own. If we don’t ask for help from people, we’re just gonna be burying ourselves in our own little bubble and it’s gonna start affecting the people around us,” he said.

Del Rosario added that he wants the film to make an impact on people who have experienced trauma.

“I just think about all the people who are burying all of the things in their head and staying in their bubble and how much weight could be taken off if they just go to the closest person that they love,” he added.

Through the grant, Del Rosario will be getting $8,000 for I’m Okay (And Neither Are You) – more than half of the $12,000 commissioning grant. He said he will allocate the grant for principal photography and post-production expenses.

Del Rosario plans to finish his documentary when he graduates with his master’s degree in Fine Arts in Documentary at the New York Film Academy in September.

He also plans to send the documentary to film festivals and screen it to students with the help of GSA and non-profit organizations in Los Angeles. – Rappler.com