[OPINION] Undermanned, overworked: A doctor’s view from the frontlines of the coronavirus outbreak Facebook Twitter Copy URL
Copied
'People hoarding goods, and even our co-employees at the hospital grabbing donated food, is an ever present reminder of the human instinct to survive during times of disaster' 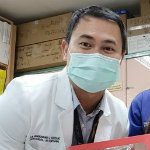 A few nights ago, I was walking home at 10:30 pm. I live three blocks from the Philippine General Hospital (PGH). When one is on Surgical Pathology rotation, it is not unusual to be cutting specimens until late night or until the wee hours of morning just to finish. Walks like these are unavoidable. That night, the street was dead silent, with looming shadows from the street lamps.

At a short distance, three men approached me. “Boss, saan kayo papunta?” (Where are you headed?)

I instinctively grabbed my ID which hung on my neck and blurted, “Doktor po ako sa PGH!” (I am doctor at the PGH)

I stepped into the light to show them my ID, and they let me pass. I knew they were probably just barangay tanod (village watch) officers, but I was kind of shaken by the experience. A month ago, the streets of Pedro Gil would have been teeming with jeepneys roaring past me, with street vendors selling balut and barbecue on the sidewalk.

None of that now. We were on lockdown, and strict curfew was implemented.

About a month ago, when we first heard of a novel coronavirus ravaging the city of Wuhan in Hubei, China we thought little of it. Just a distant problem of a virus infecting the residents of the city. We watched the news of their lockdown on television, seeing the panic and the desperation. It seemed so distant.

But they had underestimated the menace. People fleeing Wuhan brought with them the virus to other parts of Asia, Europe,and America and we watched stunned as the first cases were reported in Manila.

Last March 12, the national government announced a community quarantine over Metro Manila. People panicked, some hoarded groceries and goods, some grabbed their suitcases in a mad rush to the provinces. At the central laboratory, we were told we were going on skeleton duty. The residents were divided into three groups, each to go on one week straight duty, and two weeks quarantine.

I was part of the first team and it was chaotic. Meetings were held with the section heads on Monday, March 16, to discuss the skeleton schedule of all the laboratory personnel. We were severely going to be undermanned, but it was the only way to ensure that all services will be available with the staff having minimal exposure to the hazards at the hospital.

The two-week quarantine after exposure was necessary, it was the only way to guarantee that everyone can safely rotate. A chilling scenario if the skeleton duty was not implemented was that an exposure from someone sick can transmit the virus and render the staff ill and severely impact laboratory operations.

For our part, only a third of the residents will do the job of grossing, signing out, resolving backlog cases, and attend to referrals.

Later in the week, the national government announced an enhanced community quarantine – meaning public transportation will be halted, work suspended, curfews in place. Only groceries, pharmacies, and banks were open.

Problems arose in the already thinned out staffing, because of transportation and accommodations. Some medical technologists had to cram into a small space at the back of the laboratory information to sleep. Part of the blood bank was also used by the staff to rest in. Transportation was a problem even to those with private vehicles because checkpoints were strict.  (READ: Left in the dark: Little protection for government’s coronavirus frontliners)

It was a logistical nightmare that required coordination and a lot of paperwork. During most of our daytime duties we struggled to look for housing for the staff, arrange schedules, and get food for those on duty. Food was a challenge because most fast food chains and restaurants were closed. After a short deluge of donated food, it slowly trickled down to none.

On top of this, we still had to continue grossing specimens which were surprisingly voluminous and of quality- with maxillectomies, whipples procedure, total prostatectomies, and even gynecologic malignancy specimens. We were told that despite halting admissions, they had apparently filled the surgical wards with patients prior to the lockdown.

Food that our consultants and some donors provided helped tide us over in this seemingly long first week of community quarantine. Delicious food helped keep the spirits up during the week. (READ: How to help healthcare workers, frontliners during coronavirus pandemic)

Then to our surprise, we were told Pathology residents will now help man the COVID triage area. That removed two more posts from the residents on duty. Now we had to cover each other during AM and PM duties, grossing and signing out.

Recently we were told that PGH will be a referral center for COVID-19 cases. That posed a huge potential problem in a time where personal protective equipment like masks, gowns, gloves, and face shields are hard to come by. It would be like going to war without an armor. If health workers are exposed without adequate protection, they are going to be vulnerable to the virus, including their families, in turn.

Such strange times. I remembered my fourth year of medical school or clerkship and the strongest storm ever recorded in human history leveled Tacloban City and I was in ground zero. Except, this time, as I looked around the street that night, the infrastructure was intact, the electric lights still blazed. Regardless, I felt the same ominous feeling.

People hoarding goods, and even our co-employees at the hospital grabbing donated food, is an ever present reminder of the human instinct to survive during times of disaster. It was similar to the looting incidents in the aftermath of Yolanda. It was not reassuring.

I hope that the government does the right thing and support the frontliners in this health crisis of global proportions. Potentially, the next coming weeks could be rough for our country. (READ: Filipino scientists call on government to conduct mass testing for coronavirus)

But there is hope.

Every time I see dedicated doctors, nurses, medical technologists, other allied health professionals and even guards, soldiers, couriers, and street sweepers I encounter while walking the streets early morning, I am reminded of the resilience of the human spirit and the undying will and dedication to fight this battle. (READ: ‘Your service is heroism’: Here’s a big thank you to our Filipino frontliners)

May God be always on our side. – Rappler.com

Thaddeus C. Hinunangan is a Pathology Resident Physician at Philippine General Hospital and a columnist at Health and Lifestyle Magazine.