This essay is one of two winning essays of a national essay competition for the Global Summit to End Sexual Violence in Conflict. The summit, led by British Foreign Secretary William Hague and UN Special Envoy Angelina Jolie, will be held at the Excel Centre in London from June 10 to June 13. 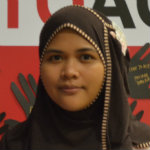 Last September 2013, the Philippines witnessed another armed encounter in Mindanao, this time between the Armed Forces of the Philippines and the Moro National Liberation Front.

The conflict prompted an initial displacement of 100,000 individuals upon onset; at present, 8 months after the siege, around 64,000 internally displaced persons are still in need of protective elements both from government and non-government sources. (Read: Life is hard for displaced Zamboanga residents)

With the tens of thousands of families still lodged in evacuation sites with no proper access to decent housing, livelihood, water, sanitation and health facilities, and psychosocial support, sexual and gender-based violence (SGBV) continue to haunt thousands of women and girls as they become more physically and emotionally vulnerable to abuses and exploitation from predators and opportunistic individuals.

In JFE Grandstand and Cawa Cawa evacuation centers, reports of sexual assault against children and prostitution and trafficking of young girls and women are thriving, causing an alarm on securing protection of women and children in Zamboanga. (Read: Is prostitution happening in Zamboanga camps?)

This situation is not the first amongst its kind, nor is it the only situation there is.

Around the world, millions of women and girls in conflict-affected areas experience abuse, violence and exploitation due to weak social foundations or lack of protective elements such as gender education.

Another factor is the conservative cultural and religious landscape where the women grew up, as this most of the time prevents them from speaking up against the violence committed against them.

Granted the delicate situation of conflict, psychological first aid appears to be the first defence available against SGBV. Sudden outburst of armed encounters and displacement can cause emotional trauma and profound stress, which can alter realities for those who are affected by conflict. (Read: Art helps calamity victims recover from trauma)

Unlike shelter and food security concerns, which could be addressed by tangible solutions, sexual violence committed against women is a by-product of economic and emotional stress that fuels predator opportunities for the aggressor; psychosocial care has to be provided on the onset of conflict to mitigate risks of violence.

This is where women can take the lead role in ensuring that their families and community members are psychosocially supported, as women are naturally caring and understanding.

These women are seen as catalysts of psychosocial revolution within the community.

In my community visits around Zamboanga City, I witnessed how community organizing helped provide women with opportunities to engage each other and work together towards a common goal; the community-driven rehabilitation amongst members help in creating a safe environment that is responsive to emotional well-being and economic stability of families living in IDP camps.

Given this observation and the need for psychosocial support to community members, a community-based psychosocial care with focus on gender sensitivity education and community livelihood is needed. I believe that women are in the best position to spearhead this, especially with their propensity to organize themselves and care for their community members.

As the humanitarian industry evolves, more opportunities are opening up for women to organize themselves, such as establishing women-friendly spaces, providing gender-sensitivity lessons to communities, and spearheading activities for the creation of partitions in houses and separate male and female toilets in evacuation camps, provision of livelihood opportunities for displaced men and women, and access to psychosocial care which can be re-echoed to the community.

These opportunities also include strengthening referral pathways in case of occurrence of SGBV and/or other protection issues.

At the end of the day, a responsive and more inclusive community that is sensitive to and supportive of gender empowerment provides the best environment for women and children. Such is what I would like to see in war-torn Zamboanga. – Rappler.com

Reinna Bermudez is one of two Filipinas who won the national essay competition sponsored by the British and Australian Embassies in the Philippines.

She works as a Programme Assistant for the Philippine Programme at the Community and Family Services International (CFSI).

Reinna will represent the country in the Global Summit to End Sexual Violence in London from June 10-13.

Her winning entry answers the question: “What can we do to end sexual violence in conflict and how can women act as agents of change to accomplish this?”

Read the other winning essay by Jill Angeli Bacasmas