Aug 2, 2014 5:17 PM PHT
Facebook Twitter Copy URL
Copied
Forty-eight years ago today, a 7.3 magnitude earthquake occured in Casiguran, Aurora, with the city of Manila bearing the brunt of the tremor 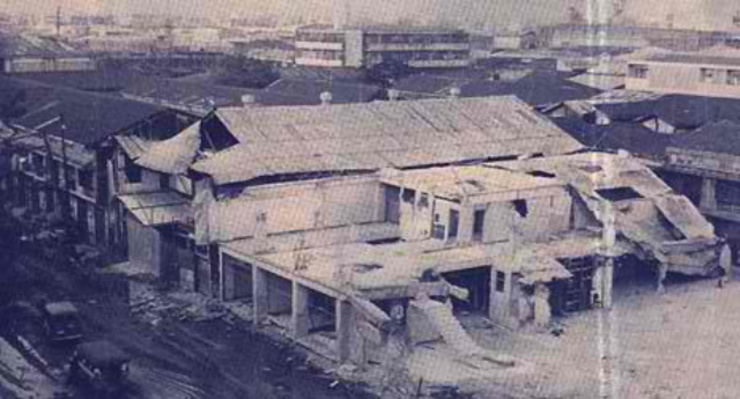 MANILA, Philippines (UPDATED) – A 2004 study conducted by the Japan International Cooperation Agency, the Metro Manila Earthquake Impact Reduction Study (MMEIRS), found that Metro Manila is due for a magnitude 7.2 earthquake that may kill as much as 34,000 people.

Let’s look back at one of the most destructive earthquakes to hit the metropolis, which caused the collapse of buildings, killing hundreds of people.

At around 4 am on August 2, 1968, a magnitude 7.3 earthquake hit the city of Casiguran in Aurora province.

Though Manila is located relatively far from the epicenter, it was the national capital that suffered the brunt of the tremor.

Fall of the buildings

Ruby Tower, a 6-storey building in Binondo, Manila, was among the buildings that were severely damaged. In it were 38 commercial units and 76 residential units.

According to the post-disaster study conducted by the United Nations Education, Scientific and Cultural Organization (UNESCO), much of the building collapsed. “The upper floors fell southwards while the southern end of the roof moved about 30 feet south and 10 feet east. The lower floors appeared to fall close to their plan position.”

Striking at a time when most people were sleeping, massive loss of lives was inevitable.

The search and rescue operations involved around 6,000 volunteers. (Read: When an earthquake hits Metro Manila)

Now, a memorial hall stands on its location.

Another building that suffered severe damage was the Philippine Bar Association building. Based on reports, the columns on the first floor were severely crushed that the building almost collapsed.

The Old Philippine National Bank, a 6-storey H-shaped building had to be demolished because of the irreparable structural damage caused by the quake. Other buildings either suffered considerable damage or non-structural damage.

While buildings collapsed in Manila, several landslides occurred and a number of ground ruptures were seen in Casiguran.

While the epicenter was in Casiguran, Aurora, most of the collapsed buildings were in Manila.

Director Renato Solidum of the Philippine Institute of Volcanology and Seismology (PHIVOLCS) said in a text message to Rappler that this could be attributed to the quality of buildings at the time.

“The shaking felt in Manila was relatively strong but the main reason why some buildings collapsed was poor design and construction. There was no National Building Code approved before 1972,” Solidum said.

There was also no national disaster agency in 1968. The National Committee on Disaster Operation (NCDO) was established only after the Ruby Tower disaster.

Republic Act 6541, An Act to Ordain and Institute a National Building Code of the Philippines was enacted in 1972, 4 years after the disaster happened.

Basically, the law provides guidelines and minimum standards for the construction of buildings. It includes the proper location and materials to be used, among others.

In 1977, President Ferdinand Marcos revised the provisions of the law and called it the National Building Code of the Philippines.

Today, we have the institutions and measures that were sorely missing in 1968 – a disaster agency, the National Disaster Risk Reduction and Management Council (NDRRMC); and the Building Code. Earthquake drills are regularly conducted in schools and offices in Metro Manila and other parts of the country. (WATCH: Is Manila prepared for an earthquake?)

But the question is, are these enough to prepare us for the next big one? – Rappler.com