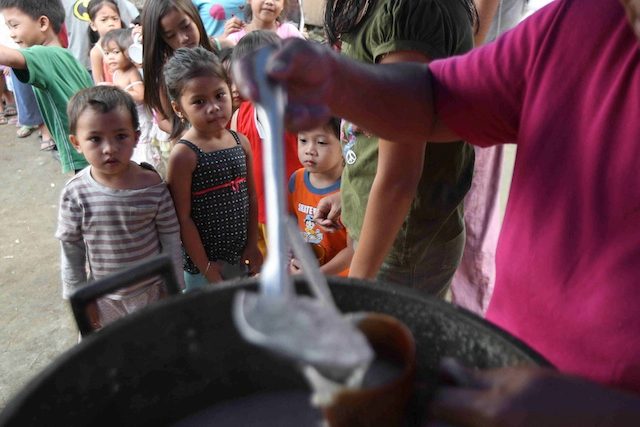 Facebook Twitter Copy URL
Copied
Given the statistics on hunger, the realities, and the nature of the Philippines as calamity-prone, and in the face of the 2016 elections, nutrition must be in the platform of local and national candidates

Instagram is populated by appealing photos of juicy steaks and too-cute-to-eat cupcakes. Other social media platforms are abuzz with the latest food craze. In posh cafés and restaurants, customers armed with smartphones find the best angle to document the perfect meal set to be devoured.

This seems to be the norm. But it isn’t.

According to the results of a recent Social Weather Stations (SWS) survey, 4.8 million Filipino families said they experienced hunger in September. This is not hunger by choice. This is involuntary hunger.

In a July 2014 discussion paper, the Philippine Institute for Development Studies (PIDS) reports about the staggering figures on child hunger in the country. In 2009, 36% or 13.4 million children aged below 18 are considered income poor. In the same year, there were around 4 million who were severely deprived of sanitary toilet facilities, 4 million who did not have access to safe water, and 260,000 who were severely lacking decent shelter.

These realities are poignant to hunger. As Department of Social Welfare and Development (DSWD) Secretary Dinky Soliman said during a forum entitled, “Aiming for #ZeroHunger” held Friday, November 14, “Food security is not only about food, it is also about shelter.”

Further, PIDS states that “with the recent trend in population growth, the lack of inclusivity of economic growth, and the exposure of the country to natural calamities, we would expect that the number of children in dire condition would not be significantly reduced within the next few years.”

Children are the most vulnerable among the vulnerable sectors. When a calamity strikes, children are most often severely affected; they may cease to attend school and work in odd jobs to help their families.

The fact that there are millions in this country who are hungry is not only a temporal concern; it is a concern which transcends generations. The effects of hunger, particularly in the first 1,000 days of life, are irreversible not only to the individual but to the country. Malnutrition damages bodies and brains. Malnutrition, if unaddressed urgently and effectively, will be detrimental to the country’s future. The 8th National Nutrition Survey reveals that 30.3% of Filipino children aged 0-60 months are stunted (too short for their age), 19.9% are underweight and 7.9% are wasted (too thin for their height). These realities are disturbing, after all, food and nutrition is a right of every individual. These are the children who will be 20% less able to read and who will earn 20% less later in life.

When children die of preventable deaths, when children become stunted, and when brains are underdeveloped – all because of poverty – who are responsible?

Rogier Van de Brink writes: “Unskilled minimum wage Filipino workers are among the least productive in the world. This is because of a long history of underinvestment in people, principally in reference to education and health care.”

Underinvestment can be gleaned from the policies enacted, programs funded, and the importance given to nutrition as a tool in governance. Further, he states this “underinvestment starts at the critical early age of physical growth and mental development that defines a child’s potentials and sets the limits to what health and education investments can add.”

The government’s Pantawid Pamilyang Pilipino Program (Conditional Cash Transfer Program), the country’s largest social protection program, has reached out to the poorest of the poor families. However, it is not a stand-alone poverty reduction program and must be supported by other initiatives for inclusive development. Local government units (LGUs) must purge their ideas, energies, and resources to address hunger.

The implementation of the Philippine Plan of Action, the country’s national framework plan on nutrition, is grounded on the basic premise of convergence and complementation. The Local Government Code (Republic Act 7160) mandates LGUs to organize/re-organize/strengthen functional local nutrition committees. They are also at the helm in the recruitment and deployment of the Barangay Nutrition Scholars (BNS) or the community-based nutrition scholars. LGUs are also responsible for formulating, implementing, monitoring, and evaluating the Local Nutrition Action Plans (LNAPs).

It is important to be cognizant of not only revising policies but actually making a dent in realities. There are only 97 out of 1,634 LGUs with outstanding nutrition programs. For non-performing LGUs, nutrition may revolve around weighing, feeding of children in Day Care Centers and the schools, and the July nutrition month celebrations.

In some instruments for good local governance, nutrition, even when mentioned, is ignorable and is ignored. Some municipal or city plans of action for nutrition are isolated from the LGUs development and investment plan. Barangay or community officials have little knowledge of the need for Barangay Nutrition Councils and do not have LNAPs. Nutrition is not budgeted unlike Gender and Development, Disaster Risk Reduction, among others.

Clearly, LGUs must be mobilized for good nutrition programming to deliver results. Local leaders must also have the political will to highlight nutrition in their agenda. Given the statistics on hunger, the realities, and the nature of the Philippines as calamity-prone, and in the face of the 2016 elections, nutrition must be in the platform of local and national candidates.

Generation Nutrition resonates the same call, specifically calling on governments and the international community to take urgent action to prioritize the fight against acute malnutrition, and save the lives of millions of children under the age of 5. In a global scale, acute malnutrition is directly responsible for over one million under-5 deaths every year. Over 4,000 Filipinos have signified their support of the call by signing the Generation Nutrition petition.

Gabriel Mistral wrote: “We are guilty of many errors and many faults, but our worst crime is abandoning the children, neglecting the fountain of life. Many of the things we need can wait. The child cannot. Right now is the time his bones are being formed, his blood is being made, and his senses are being developed. To him we cannot answer ‘Tomorrow,’ his name is Today.”