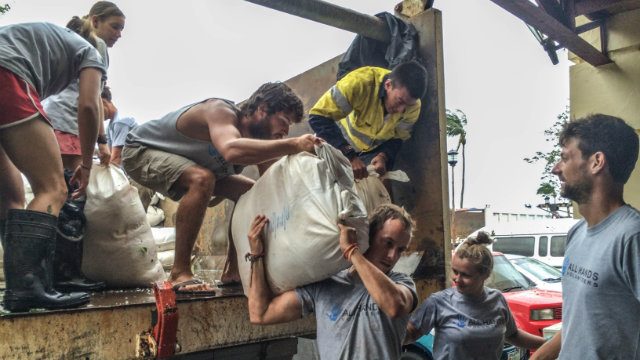 Facebook Twitter Copy URL
Copied
'Volunteers feel like they are part of this community. We are living here, we are working here. We have to help this community.'

MANILA, Philippines – When it was confirmed that Typhoon Ruby had entered the Philippines and would traverse the same path as Typhoon Yolanda, people began to panic and fear for the worst. (READ: Panic buying as Hagupit threatens to make PH landfall)

Raddant, along with 34 All Hands Volunteers, decided to do something positive instead. The volunteers, who were working on transitional homes for people affected by Typhoon Yolanda in Tacloban, stopped their operations on December 5, secured their construction site, and brought all their tools back to their basement with only one question in their minds: “How can I help?”

They coordinated with other international organizations and went straight to bunkhouses to help people prepare their houses for the typhoon.

“With 6 kilometers of rope, we tied down the metal roofs of all the bunkhouses to make sure that roofs will not be blown away,” Raddant explained in a phone interview with Rappler. On December 6, the day Typhoon Ruby was expected to lash the city with heavy rains, the volunteers went to different evacuation centers to help pack relief goods. They worked until 3 pm, even if the typhoon was expected by 4 pm.

When 4 pm came, they locked themselves up in their base, and waited for the storm to pass.

The next day, as soon as the sun came out, the volunteers coordinated with the city government and helped in distributing relief goods. They also helped in cleaning the roads blocked by trees and debris.

These international volunteers are no strangers to disasters. They were also present in the aftermath of the Bohol earthquake and when Typhoon Yolanda hit the Visayas last year.

“Many of the volunteers have been here for 6 to 9 months; some even more than a year,” said Raddant. Responding and learning: A foreigner’s lesson after Haiyan

Countries from all over the world were also ready to provide Filipinos financial and medical aid, relief goods, and response teams.

According to the Foreign Aid Transparency Hub (FAiTH), a website set up by the Philippine government that lists down donations for Super Typhoon Yolanda from different countries and international organizations, at least $1.6 billion in foreign aid has been pledged for survivors of the super typhoon.

“People feel compelled to help when they see other people who are in need,” explained Raddant.

The All Hands Volunteers came to Tacloban to help survivors rebuild but became victims themselves because of Ruby. They say, however, they are here to stay.

“For Typhoon Ruby, it is different. Volunteers at this point feel like they are part of this community. We are living here, we are working here. We have to help this community.” Meanwhile, Raddant encourages volunteers to help if they can.

“We are not only here to help in any way that we can, but we are also here to provide a way for anyone who wants to help, to come and help as well.” – Rappler.com

For those who would like to volunteer, please email philippinesresponse@hands.org