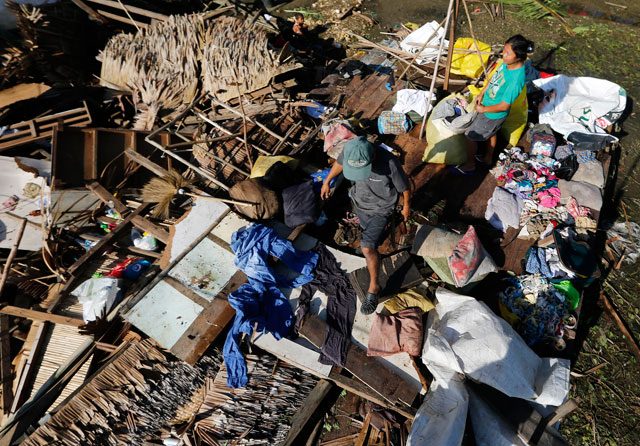 MANILA, Philippines (UPDATED) – Typhoon Ruby (Hagupit) left behind 18 dead as it exited the Philippine Area of Responsibility, according to the latest report of the National Disaster Risk Reduction and Management Council (NDRRMC).

In its 6 am report on Thursday, December 11, the NDRRMC reported the most deaths in the Eastern Visayas region, where Ruby, then a super typhoon, first made landfall. The council tallied one death each from Regions IV-A, IV-B, and VII.

Four children – Junrey, Alfie, Juliana, and Jolina Amoyo from Borongan, Eastern Samar – all died due to drowning. Interior Secretary Manuel Roxas II, who was part of the national government’s “frontline team” earlier said at least 12 had died in the province.

Another 4 people from the provinces of Samar, Western Samar, and Biliran also died as a result of drowning.

The rest of the reported deaths were caused by injuries or trauma caused by uprooted trees and blunt objects. One was reported dead due to myocardial infraction and another, due to electrocution.

At least 916 individuals were injured due to Ruby, with none listed as missing.

As of the NDRRMC’s latest count, close to 2.8 million people in 9 different regions were affected by Ruby. More than 940,000 people are still in 3,186 evacuation centers throughout the country, days after the storm directly passed through the country.

Thirteen provinces are still without power, while most communication lines in affected provinces have already been restored.

Six bridges in Regions II and V are still impassable, according to the NDRRMC.

In his report during the NDRRMC meeting on Thursday, Roxas said the situation in worst-hit Eastern Samar has already “stabilized.”

Roxas, who flew back to Manila Wednesday, December 10, said major supply routes to the province have already been opened, making the transport of relief goods from two major hubs possible.

The DILG chief said there have been no reports of looting or hooliganism in the aftermath of Ruby. Power remains out in the region and will be restored in two to 3 weeks, according to the local electric cooperatives.

At least 9 were confirmed dead in the region, lower than Roxas earlier report of 12 deaths. Another 4 remain missing, based on reports coming from 593 of 597 barangays in the area, Roxas said.