Mar Roxas and the motorcycle slide A wise man told me that Filipinos gravitate towards  3 kinds of  leaders – the populist man of the  people, the vigilante hero, and  the problem solver.

Of the 3, he says, it is the populist who  gets the  most support. In the minds of the people, he  embodies their needs and wants. And regardless of  his failings, his every move captures their imagination and he can do little wrong. Thus most politicians strive to be known as populists, regardless of their actual ability to deliver on the promises they make.

For 6 hectic days I got to watch up close how Interior Secretary Mar Roxas and his team worked. And there is one thing I am sure of: for someone of his political experience and perceived intentions, Mar Roxas isn’t playing the traditional political game.

As a member of the Congressional Oversight Committee that monitors the implementation of Republic Act 10121 or the Philippine Disaster Risk Reduction and Management (PDRRM) Act of 2010, I had the privilege of joining, as a somewhat skeptical observer, our National Government Frontline Team to Eastern Samar. The team was at the site of the expected landfall to: (1) ensure that disaster preparations are in place, (2) monitor the situation, and (3) direct post-disaster operations.

All of the frontliners were mostly veterans of the Zamboanga siege, Bohol earthquake, or Super Typhoon Yolanda. It was a very tight knit group, and they were basically replicating what they had already done before. The main difference, they told me, was that this time, Defense Secretary Voltaire Gazmin stayed behind to coordinate all efforts from the National Disaster Risk Reduction and Management Council (NDRRMC) Headquarters, Social Welfare Secretary Dinky Soliman was prepositioned in Cebu to manage the follow-on relief and rehabilitation operations, and Secretary Edwin Lacierda was included in the team to handle communications – changes that reflected important lessons they from previous crises.

I have many stories to tell from that experience with Secretary Mar and his team, but one incident really struck me as indicative of his character.

Soon after the storm struck, we passed by the Borongan public market, and found it ankle deep in mud and garbage from the nearby river. Of course, there were more urgent tasks to accomplish that day, such as securing the NFA warehouse for the food supply, clearing the airport, and opening the road to Dolores, but Sec Mar made sure to ask the fire department and city market master to clear the market as soon as possible. His reasoning was simple and logical: the unsanitary conditions, if allowed to remain by the time the market opened, would have led to the outbreak of disease and cause even more problems.

There were lots of other things to do in the succeeding days. But on Day 6, after everything was basically stabilized, and we were finally ready to pack up and leave, Sec Mar finds time to check up on the market. To say that he was frustrated is an understatement. The firemen had merely hosed down the mud, spreading it around even further. And because the available pay loader had suffered a flat tire the previous day, the garbage and debris remained uncollected. One could see the worms crawling in the mud amidst the all that squalor.

The Bureau of Fire Protection (BFP) General and all of his men got a reprimand, the market master was dispatched to buy shovels, and every one – including his entourage and escorts – were made to buckle down and start clearing the mud and garbage.

Mind you, these were the same men who followed him into the eye of the storm not so many days ago. These were the same men who helped clear the road to Dolores. And these were the same men who made the dangerous boat rides to relieve the isolated offshore islands. The firemen in particular spent the night of the storm evacuating people who waited till the 11th hour, and there is no accounting the number of people they had rescued. In my eyes, they were heroes – every one of them. And I am sure that they were all pissed at Sec. Mar for the censure they received and the manual labor he made them do! No matter how exhausted everyone was, no matter what they had accomplished before, in his eyes the work was not yet done, and no one had the right to slack off. He led them himself in that clean up operation! 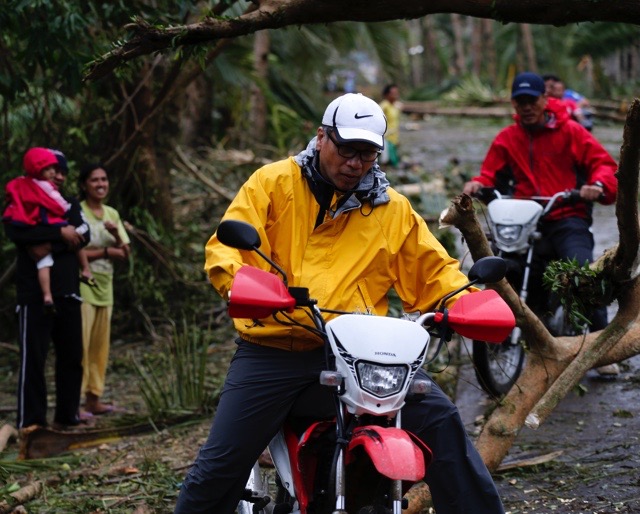 After seeing how news of his motorcycle slide was taken out of context by people who were not there, I think it is a good thing that there was no media in the market that day. If there was, I am pretty sure that all that drive and determination, all that attention to detail and leadership by example would have been reduced to a seemingly epal photograph of a perceived contender for the highest office in the land, shoveling mud and picking up trash in the market to curry popular favor. No, for us who were there that day, Mar Roxas was not popular. But he got the job done!

And speaking of that motorcycle ride, there were two cabinet secretaries, two congressmen, and two generals making those last 20 hectic kilometers from the stalled convoy to Dolores in the tail of the storm, and approaching twilight in borrowed motorbikes. Among ourselves, we had several combat veterans, several experienced motorcycle riders, and a couple of iron man finishers. And let me tell you that most of us would have quit to wait for the rest of the convoy if not for Sec Mar leading the way.

There was a whole off-road stretch of at least fifty meters of mud capped by an eerie cemetery that made every one’s knees tremble (from fatigue or fear, I don’t know). Of course, we all fell, slipped, and slid in the sometimes knee-deep mud and fallen trees. But it was only Sec. Mar’s picture that was published, out of context, by someone who waited for him from the relative safety of the road.

But it was all worth it when we saw the gratitude and relief in the eyes of the people of Dolores when we finally broke through. They were no longer isolated, they had not been left alone, and their national government was with them. Together, they were going to get through this crisis and rebuild.

The wise man says that the problem solver is always the least appreciated, his successes un-acknowledged, his every shortcoming magnified. Fixated on our image of the populist politician, we mistakenly think of his direct and no-nonsense approach as being high handed and elitist. In attempting to fit him into the mold of traditional politics, we dismiss his willingness to get down and dirty to handle the brass tacks of the job as simply desperate, epal attempts to garner media mileage and gain public sympathy. Always skeptical, we attribute other motives to the problem solver for simply trying to do his job. But in the end, the wise man says, it is not the populist nor the vigilante, but the problem solver who truly serves the people.

My past experiences have often made me a skeptic. But one thing is clear in my mind: for those 6 days in Eastern Samar, many people were simply trying to do their jobs to the best of their abilities: the mayor who left her hospital bed in Manila to be with her people; the planning officer, in over his head when he was made DRRM officer; the governor who deferred his chemo treatments to stay in the command center; the local and international NGOs and relief volunteers who rushed to help without hesitation; the media men and women who were on the ground reporting responsibly from the start; and many others who did their share.

Like them, Mar Roxas was merely doing his job. He was serving the people.

I know. I was there. – Rappler.com