Dec 25, 2014 11:48 AM PHT
Shakira Sison
Facebook Twitter Copy URL
Copied
The OFW will say he or she wants nothing because they can always buy it abroad. The truth is that they'd spend their last money on something that would make someone else smile. A man is first in line to board his flight to Asia. He’s been waiting several years to come home. Because he was able to time his visit during the holiday season, he claps his hands when the plane lands on Philippine soil. The cabin is filled with a buzz of excitement about what awaits outside the plane’s sealed doors.

A woman walks out with burning eyes, not having slept due to restlessness during her flight. She is pulled by the weight of her cart of balikbayan boxes down the NAIA arrival ramp. Its momentum is as unstoppable as the churning of her insides, which have been grumbling since she learned that she would make it home at last.

In the mass of heads keeping watch for arrivals in the unmistakable Manila heat, each one spots family members and their faces relax. After being away for so long, there is nothing like seeing the first person who knows them from the life they left behind.

The ride home is a refresher on urban development. A new mall has gone up where an old market has been torn down. A neighbor’s house has been sold or renovated. Outside its gate, a familiar face waves at the balikbayan’s convoy. “Sino nga iyon? (Who is that again?)” they ask.  “Ah, kapatid ng kumare ng kapitbahay natin (Oh, the sister of the fellow godmother of our neighbor),” someone answers. Back home, everyone is everybody’s neighbor or relative. It doesn’t matter how.

In their separate houses they are greeted by the aroma of a homemade meal. Each one is approached by children who have shot up in size that they are barely recognizable. It takes a while to adjust to the change in climate, mood and surroundings, and the fact that these grown kids and this slightly weathered spouse are still the same ones they left behind.

After the meal, the boxes are opened in the center of the room. These are presents that took Nanay months to shop for and pack. Tatay was sent a list of the kids’ favorite toys and gadgets. He was told what was the current fashion in case he came across something for his teen. Shoes are tried on, shirts are pressed against chests for size. Junior runs to try on a pair of jeans in the bathroom. He’s binata now so he will no longer undress in front of others. Meanwhile, his Ate finds a ten-dollar bill in her new handbag, placed there by Nanay for good luck.

In the evening, husband and wife reacquaint themselves with one another. It’s been years and they’ve gotten used to sleeping alone. The worker shares stories of cramped rooms filled with equally lonely foreign workers. With their familiar touch comes a certain comfort, a sense of abandon, and then relief. Yet soon enough comes joy’s ever-present twin of sadness, warning them that there will be eventually be a goodbye. 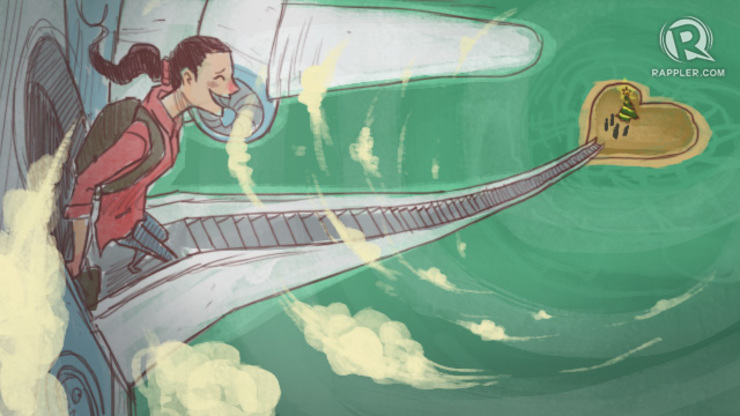 The next day, Tatay asks if anyone wants to go to the mall. Nanay knows funds are limited but she still insists on giving everyone a good time. Tatay hands out money for the small ones to ride bumper cars or to play in the arcade. Nanay gives her credit card to foot the bill of a buffet for the entire clan.

Everyone goes home with a new garment, accessory, or toy. For days they rave about the delicious unlimited meal they had at the mall. The OFW will say he or she wants nothing because they can always buy it abroad. The truth is that they’d spend their last money on something that would make someone else smile.

OFWs never speak of their hardships, their difficult bosses, or unfriendly coworkers. They are generous with life lessons and advice without mentioning it’s the first in a long time that they are being heard. They speak Filipino with the eagerness of someone who’s had to speak other languages, knowing some sentiments cannot be translated outside one’s own native tongue.

There is a secret foreign workers never tell in their visits and calls, in the presents they send, or in the money they remit as regularly as calendar pages are turned. Unable to provide their physical presence, the goods purchased with the cash will be the only evidence of their love. Each item is carefully chosen, scrutinized, and even embraced – as if to transport their kisses through the items that take their place in their families’ lives.

They rest in the fact that when their child goes to school with a new backpack, or a teen gets to brag about a new phone or designer pants, they can say, “Bili ni Nanay ‘to (My mom got me this).” or “Padala ni Tatay yan (Dad sent me that).” A house is built or a tricycle is bought to show that their OFW relative’s hard work, even in their absence, has its fruits. At least in some tangible measure, they will be thought of.

Whenever a balikbayan visits their home, all they really want is to spend time with their families. While they pretend (even for a few days) that it’s just like the old times, they will not miss a chance to be the provider, to be the cause of everyone’s happiness, and to let their family know that their struggles are all worthwhile.

No matter how many days or weeks they stay, in the end their departures are all the same – Nanay or Tatay in the clothes they were originally wearing, but everyone else donning brand new clothes and gadgets as they wave goodbye.

It is that moment that our devoted OFWs freeze into their memory until the next time they are home. As they toil away for another few years, they imagine that the possessions they left and the happiness they shared fill their places in the homes that run without them, but run because of them, as they work their love back into the money that funds everyone else’s lives. – Rappler.com