Facebook Twitter Copy URL
Copied
Having lived in one of the most disaster-prone regions in the country, every storm pushes them deeper into the mire of poverty

SAMAR, Philippines – All that Estrella Deliktor can do is look at her flooded rice field and pray.

“We are struggling with poverty, but there’s nothing we can do.” Deliktor, 62, said.

She is among the 4,139 rice farmers who bore the devastation of 3 typhoons that hit Samar island in the past 13 months. This was the third time they lost their crop, left with nothing to harvest.

Floods caused by heavy rain, overflowing rivers, and storm surges washed away crops, and caused salt water to seep into the soil. Having lived in one of the most disaster-prone regions in the country, every storm pushes them deeper into the mire of poverty.

The Department of Agriculture estimated total agricultural losses from Typhoon Hagupit to have reached P1.9 billion. It has damaged 55,850 hectares of farmlands, incurring  production losses of 56,090 metric tons in Bicol, Western Visayas, and Eastern Visayas combined. Oxfam’s rapid assessment teams validated the data, having found rice, corn, and banana crops in many regions that were completely decimated.

When the latest storm began whipping their rice crops in Barangay Nacube, in Gandara town in WesternSamar, Deliktor and her family decided to stay home.

“We didn’t go to the evacuation center because they were cramped,” she said.

“The typhoon was so strong, it had strong winds, and it partially damaged our home. Inside our house, we had knee-high floods.” 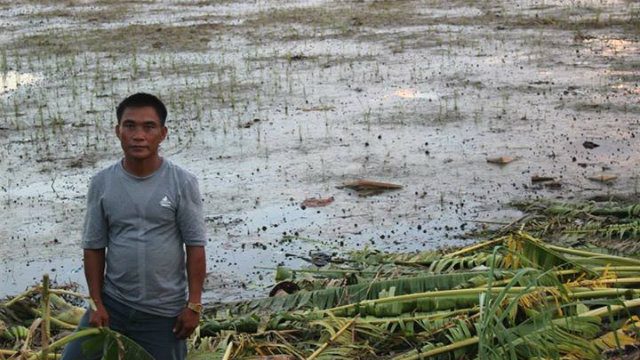 Deliktor has 5 daughters aged 32-40. With her husband no longer around, she grows the crops herself together with hired help. She farms 1.5 hectares of land and pays 8 sacks of rice per harvest season as rent. In 13 months, 3 strong typhoons flooded her rice paddy.

Before the storms, she could harvest as much as 50 sacks of rice, but the inundation of storms lowered the yields to just 30 to 40 sacks per harvest.

Deliktor said that they harvested only 40 sacks last October and had just started planting for the next season, but Typhoon Hagupit inundated and destroyed the rice farm.

“It is difficult to get food, we lost all our food,” she said. “We eat root crops if we have money, if not we have to ask for food from relatives. But there is always someone who will help.”

The village chief, Barangay Captain Renato Moral, said he evacuated when the water reached 3 feet up the walls. A blockage in the river meant Hagupit’s deluge had nowhere to go.

“Around 80% to 90% of rice farmers in his area planted their crops before Ruby,” Renato said.

This meant they could not take advantage of early warnings to harvest before the storm arrived.

“We are farming 3 hectares of land and we will be lucky to get 3 sacks of rice. We normally get 90 sacks per hectare,” he said. “There are 171 families in this barangay. Many families will have to borrow money to buy seeds.”

Around 70% of families in regions affected by Hagupit are dependent on agriculture and fisheries for their livelihoods. Humanitarian organization Oxfam is coordinating with the Philippine government in its response to Typhoon Hagupit. It is ready to distribute cash payments to assist farmers with immediate needs, including food, farm tools materials, and agricultural supplies such as seeds. – Rappler.com