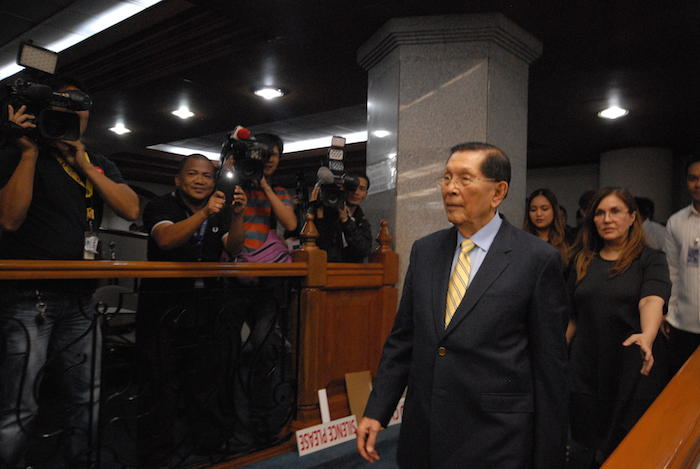 MANILA, Philippines – It’s bad news for presidential aspirant Vice President Jejomar Binay. Senator Juan Ponce Enrile, among the triumvirate of the United Nationalist Alliance (UNA), may be out of detention but he is not inclined or ready to support anyone’s presidential bid.

“Hindi na ako pulitiko (I am no longer a politician),” Enrile told reporters on Monday, August 24, when asked about his stand on the 2016 polls.

Enrile was unperturbed when he was reminded of his ties with Binay. “Sabi ko nga sa inyo, hindi na ako pulitiko (I told you I am no longer a politician),” Enrile said.

Asked if various camps reached out to him while he was in detention, Enrile squinted his eyes before saying he could not recall.

It’s another blow to Binay’s presidential bid following the indecision of the 3rd man in the triumvirate, former President Joseph Estrada, who does not dismiss the possibility of supporting survey front runner Senator Grace Poe because of his friendship with her father Fernando Poe Jr.

Enrile, a veteran politician known for his astuteness, regained his freedom as the country gets into election fever. But he is facing plunder, a typically non-bailable case, and is only out on bail following a controversial Supreme Court ruling last week.

Binay, Enrile, and Estrada led the United Nationalist Alliance (UNA) when it was still a coalition of opposition parties during the 2013 senatorial elections.

Estrada was quoted as saying he remains a member of Pwersa ng Masang Pilipino (PMP), not UNA.

Senator Nancy Binay remains hopeful that both Enrile and Estrada will support his father in the end.

“Of course, we are praying and hoping that he will support the Vice President, especially because they come from the same region. Senator Enrile is from Cagayan. My father is from Isabela,” said Binay.

She is not giving up on Estrada either even as she acknowledged that it may be a difficult decision for him. – Rappler.com