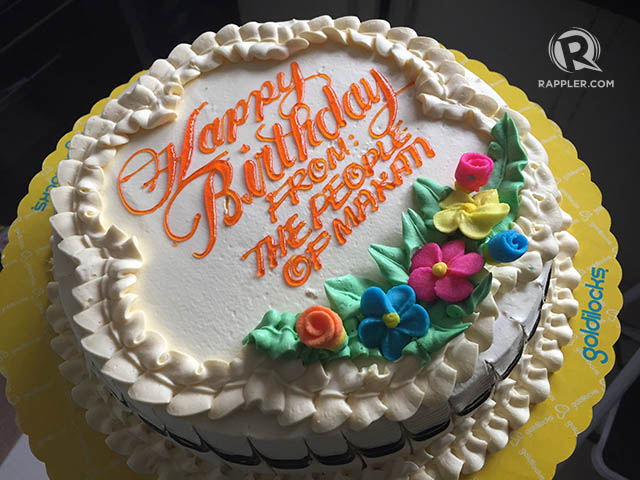 In a text message sent to Rappler on Tuesday, August 25, acting Mayor Romulo “Kid” Peña Jr confirmed that he had already signed the notice of award approving Goldilocks as the new cake supplier as well as the resolution from the Makati Bids and Award Committee (BAC) declaring the bakeshop as the winning bidder.

Goldilocks needs only to sign the documents for it to formally begin its cake production for Makati senior citizens celebrating their birthdays from August 15 to December 31, 2015.

The cakes, with a 9-inch diameter and two-inch height, will be priced as follows:

The Makati BAC recommended Goldilocks after a thorough investigation of the bidding documents it submitted to the city government.

Goldilocks is set to replace Bakerite, the cake supplier that replaced Cups and Mugs Kitchenette and Catering Services in March 2014.

Makati BAC chairperson Danilo Villas previously told Rappler that a “failure of bidding” occurred for the contract with Bakerite in 2015 following the onslaught of corruption allegations against currently suspended Mayor Jejomar Erwin “Junjun” Binay Jr and members of his family.

Mayor Binay and his father, former Makati mayor and now Vice President Jejomar Binay, allegedly overpriced the cakes at P1,000 each. However, city documents show that the each cake only cost P306.75. (READ: Overpriced cakes in Makati? Prove it, city officials say)

When elected Vice Mayor Peña was sworn in as acting mayor, he said he has been personally purchasing the cakes from Goldilocks with the help of unnamed sponsors until a new bidding conference for the supplier has been completed.

The Binay camp has criticized the latest bidding process for the birthday cakes, with Councilor Marie Alethea Casal-Uy, an ally of the Binays, saying that the premise behind the bidding process is “highly questionable and faulty.”

She also said that Peña may have even colluded with Goldilocks.

Peña denied Casal-Uy’s claims, saying that the councilor has “no proof” for her allegations and that he did not interfere with the bidding conference.

“Wala akong makukuhang benefits sa Goldilocks. Nagkataon lang na sila ang lone bidder,” he added. (I will not be getting any benefits from Goldilocks. It just so happened that it was the lone bidder.) – Rappler.com