5 killed in Bukidnon were civilians – NPA 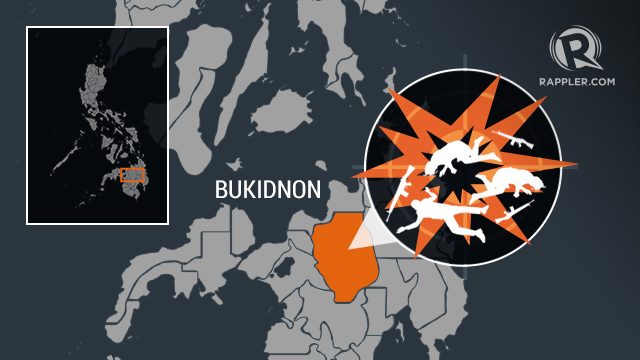 DAVAO CITY, Philippines – The 5 alleged communist guerrillas killed in Bukidnon in a reported clash with the military last August 18 were civilians and not rebels, the New People’s Army (NPA) claimed.

Mamerto Bagani, spokesperson of the NPA’s Mt. Kitanglad Subregional Command, said in a statement that the incident occurred in the village of Mendis in Pagantucan town at around 4 pm.

The victims were identified as 70-year-old Herminio Samia, 20-year-old Joebert Samia and 19-year-old Emir Somina. Two minors, a 17-year-old and a 13-year-old, were also killed.

The incident, Bagani said, happened only a few minutes after an NPA unit clashed with troops from the 3rd Special Forces Company about 4 kilometers away from the huts of the victims.

“On this firefight, 2nd Lieutenant Alvin Cantala Balangcod was killed and Private First Class Virgil Soto Rubantes was gravely wounded. On the other hand, two NPA fighters were wounded and a firearm was left behind,” Bagani said.

The NPA claimed that the victims were gunned down even if they already “raised their hands in surrender.”

Earlier, Capt. Alberto Caber, public affairs chief of the military’s Eastern Mindanao Command, said that the soldiers were conducting a security patrol that day after they received reports about the presence of armed men in the area.

“It is clear that what occurred was an encounter because our troops were shot first. We got the bodies and we also got firearms, backpacks and documents in the area,” Caber said.

Caber dismissed the rebels’ claim, saying it’s only normal for the NPA to cover up for their combat loss.

The military said that the bodies were immediately turned over to the police and local government.

“The soldiers also immediately turned over the bodies to local authorities for proper disposition. Meanwhile, our operations in the area will continue most especially in Northern, Southern and in Central Bukidnon,” Caber said.

As the number casualties from the government, rebel and civilian side rise, peace advocates are calling on both the government and the National Democratic Front to resume the stalled negotiations to address the root causes of the conflict.

In the Hague Joint Declaration in 1992, both parties agreed to tackle substantive agendas including human rights and international humanitarian law, socio-economic reforms, political and constitutional reforms, end of hostilities and disposition of forces.

In March 1998, both parties signed the Comprehensive Agreement on Respect for Human Rights and International Humanitarian Law (CARHRIHL).

The government and the NDF panels have already formulated their drafts for the Comprehensive Agreement on Socio-Economic Reforms (Caser) but the process has not made any progress after the talks hit a snag.

The guerrilla war in the country is considered as one of the longest running communist movements in Asia. – Rappler.com