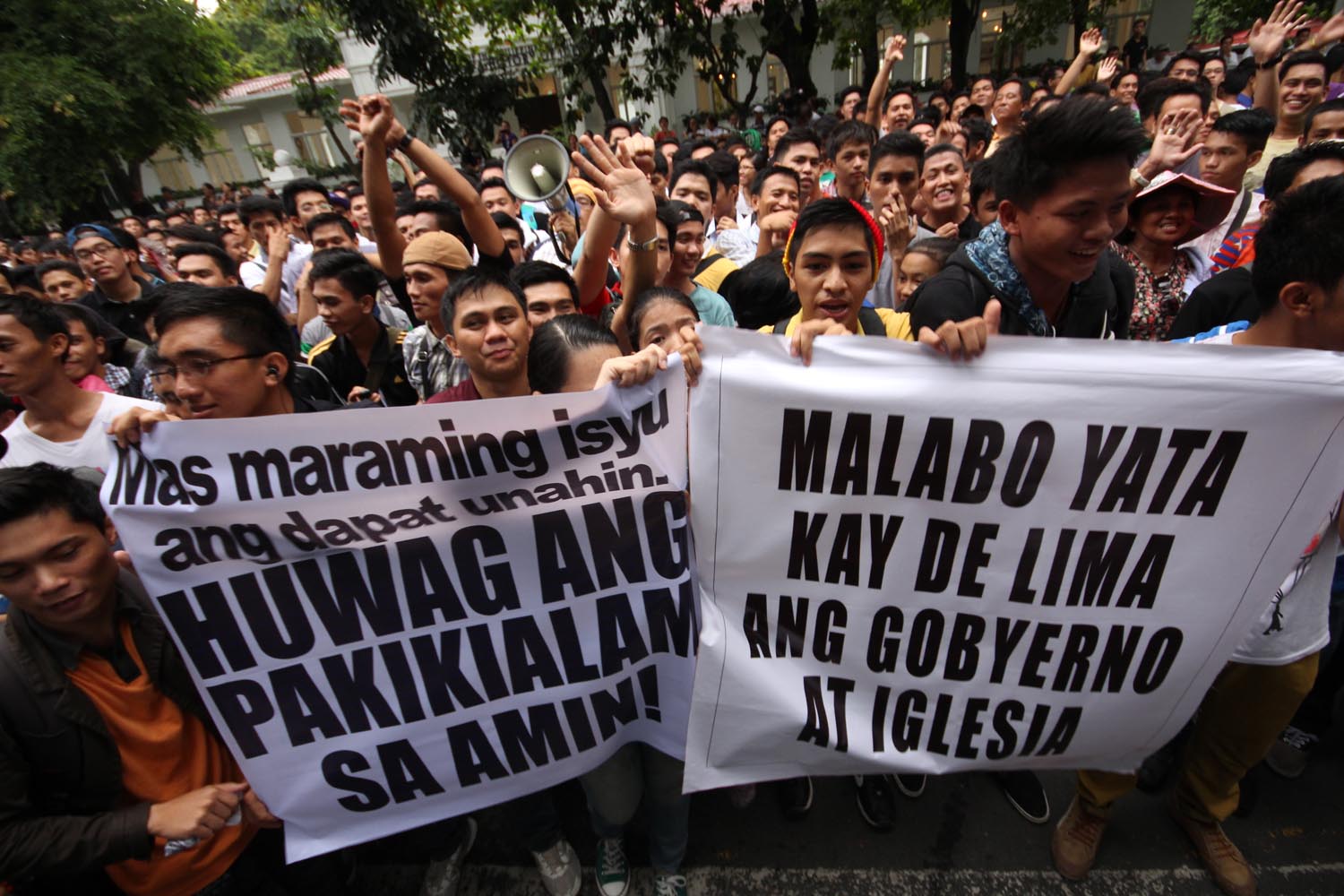 MANILA, Philippines (UPDATED) – Two of the leading contenders for the presidency in 2016 said on Friday, August 28, that the thousands of Iglesia ni Cristo (INC) members holding a vigil in front of the Department of Justice (DOJ) compound are only fighting for their religious freedom.

Vice President Jejomar Binay, the standard-bearer for the opposition party United Nationalist Alliance (UNA), said the INC gathering in Manila is an “exercise of their right to assembly and free speech, which are also guaranteed under the Constitution.”

On Thursday afternoon, thousands of INC members gathered outside the DOJ in Manila for what they called a “peaceful vigil” to protest the alleged meddling of the justice department in the internal affairs of the 101-year-old church.

Senior INC members face an illegal detention complaint filed by expelled minister Isaias Samson Jr, who himself faces a libel complaint after alleging that he had been placed under house arrest in his townhouse in Quezon City.

“We cannot fault the INC for resorting to mass action to protect the independence of their church from a clear act of harassment and interference from the administration,” the Vice President said in a statement.

Meanwhile, presidential poll front runner Senator Grace Poe, who has not officially announced her candidacy, said religious freedom should not be taken lightly.

(Let’s not belittle the importance of religion. Those people are only defending their faith. We respect that, and we should also respect their rights.)

‘Focus on other issues’

The INC is facing its worst crisis in years, as ministers alleged abduction and corruption within the secretive and politically influential church.

In July, INC Executive Minister Eduardo Manalo’s brother and mother claimed that their lives were in danger and hinted about the kidnapping of ministers who are critical of the INC.

Angel and Tenny Manalo, along with other ministers and members, were then expelled from the church.

The DOJ said that it would be looking into the allegations, a move criticized by Binay because he said the issue is supposedly internal to the INC.

He also slammed Malacañang for supporting de Lima’s decision to continue investigating the INC allegations even after the National Bureau of Investigation (NBI) declared it “case closed.”

“Instead of meddling in INC affairs, the administration should focus on more pressing matters such as poverty alleviation and addressing the MRT problem. It would do well for the Palace and justice officials to deal with what’s on their plate first,” Binay said.

For her part, Poe said de Lima should explain the merits of the case to the public.

“Maybe it would be best if Secretary de Lima faces the rallyists and explain the situation and why it’s happening,” she said.

The vigil outside DOJ began on the same day de Lima confirmed she would be running for senator in 2016. INC followers said they would not vote for her.

Meanwhile, Senator Ferdinand “Bongbong” Marcos Jr said the DOJ’s handling of the case “leaves much to be desired.”

“Instead of allowing the legal process to take its course, DOJ secretary Leila de Lima immediately held a press con to discuss the merits of the case. This created the impression, rightly or wrongly, of undue interest in the case,” the senator said in a statement.

Marcos added, “For justice to triumph, the DOJ must not only be impartial in its procedure and ruling; like Caesar’s wife, it must also be seen as being fair to all.”

Valenzuela City Representative Sherwin Gatchalian called for de Lima’s resignation to prevent being accused of bias in her handling of the INC case.

“Since de Lima will be running under the Liberal Party, her impartiality as DOJ secretary will be in question especially if members of the opposition parties have pending cases before her prosecutors. The DOH should be shielded from partisan politics,” Gatchalian said.

On Thursday, Samson’s lawyer, Trixie Cruz-Angeles, slammed the INC gathering as the work of “bullies.”

“They believe that a massing of people pressuring officials to rule in their favor is a strategy that gets them off the hook. They fail to see that they look like bullies at the gate demanding that the DOJ rule in a certain way – their way,” Angeles said.

“They fail to see that they aren’t demanding justice, they are demanding special privileges. Particularly since their demand is made even before any investigation has commenced,” she added.

Angeles pointed out that accusations of bias against the DOJ were unfounded because the investigation has not even started. The complaint against senior INC leaders was filed on August 25, only two days before the vigil.

“The investigation has not begun, no evidence has been adduced and neither side has been heard. The complaint was filed on Tuesday, 25 August, and no notices for hearings have been sent out. What are they complaining about?” she said.

The lawyer also slammed the “terror tactics” used by the church leaders, including INC auditor Glicerio Santos Jr, to suppress dissent within the church.

“Mr Glicerio Santos Jr and his co-conspirators sought to silence the growing discontent of the church members with terror tactics, fueling the suspicions of their less than honorable intentions and actions with church funds. This so-called rally is no different. They do not seek justice. They seek silence, one that is achieved by gagging legitimate concerns,” she said. – Rappler.com