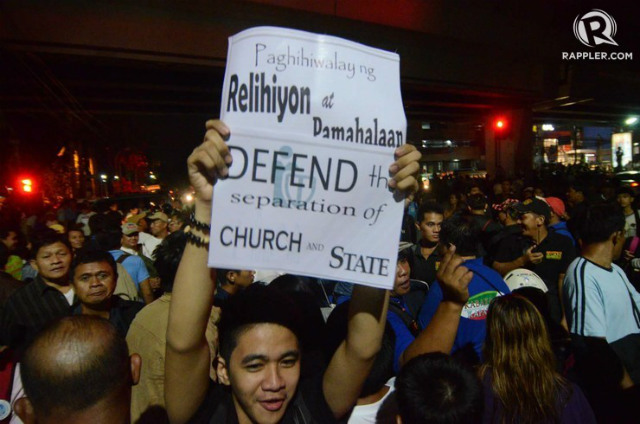 Iglesia members also continued to hold a vigil in front of the Department of Justice (DOJ) in Manila.

A written instruction from the INC leadership obtained by Rappler indicated that the Manila crowd was being asked to move to EDSA and stay there until Monday, August 31.

Concerned about the developments, Malacañang called for a meeting with Cabinet secretaries and police officials Friday afternoon. “It’s about the INC,” said a Palace source.

The Iglesia members are protesting government’s intervention in what they believe should be internal matters, singling out Justice Secretary Leila de Lima.

The organization is facing its worst crisis since it was created 101 years ago, as members have accused INC leaders of misusing church funds and harassing members. (READ: INC leaders using planes worth billions of pesos)

The DOJ is investigating an illegal detention complaint against church leaders filed by an expelled INC member.

The basis of the probe was a complaint filed by expelled INC minister Isaias Samson Jr, who accused the INC leadership of putting his family under house arrest.

Based on the written instruction, the Iglesia members were also exhorted to protest the Mamasapano caper, the Aquino administration’s Disbursement Acceleration Program, and the use of the PCOS machine for the 2016 elections.

EDSA was the site of the 1986 and 2001 People Power revolutions that toppled two Philippine presidents – Ferdinand Marcos in 1986 and Joseph Estrada in 2001.

It is also the site of the botched EDSA 3 uprising in April 2001 that attempted to reinstall Estrada as president. The INC formed the bulk of that uprising.

The same written instruction details how INC members from Metro Manila were instructed to go to the DOJ office beginning Thursday night. They were joined by members from Laguna. They were asked to move to EDSA Shrine 5 am on Saturday, August 29.

At least 20,000 members from Bulacan are also expected to join the EDSA rally on Monday, based on the INC instruction.

The instruction also indicated that the placards and all protest materials will be provided by INC. “Mayroong mga placard na gagamitin, oorder and bawat lokal kay ____ with P-10 ito c/o distrito.” INC insiders say P-10 is a code that means the activity is church funded.