Mar Roxas: INC should not impinge on rights of others

Aug 29, 2015 12:12 AM PHT
Rappler.com
Facebook Twitter Copy URL
Copied
(UPDATED) 'While all citizens have the right to be heard and to peaceful assembly, the exercise of these rights cannot impinge on the rights of others or cause inconvenience to anyone,' says the interior secretary 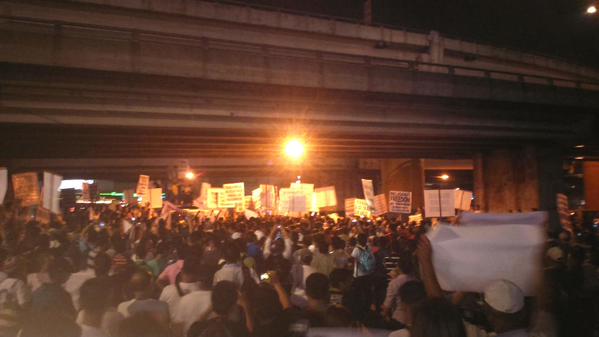 MANILA, Philippines (UPDATED) – Interior Secretary Manuel “Mar” Roxas II on Friday night, August 28, reminded Iglesia Ni Cristo (INC) members holding demonstrations that while it is their right to protest, they should not impinge on other people’s rights.

“While all citizens have the right to be heard and to peaceful assembly, the exercise of these rights cannot impinge on the rights of others or cause inconvenience to anyone, especially for other Filipinos going home to rest and be with their families,” Roxas said.

He added, “Let us remember that ours is a Rule of Law and not of men.”

INC members started flocking to the historic EDSA Shrine on Friday afternoon to continue their protest against what they called the government’s “meddling” with issues internal to their church. They started their protest at the Department of Justice (DOJ) on Thursday, calling for a “separation of church and state.”

Although Quezon City Mayor Herbert Bautista said the protesters do not have the right permit, police have yet to disperse them.

Roxas assured the protesters that authorities will observe maximum tolerance but will protect both protesters and “those uninvolved.”

“As in all protest actions, preserving peace and order with maximum tolerance will be practiced by all responding policemen,” said Roxas, the administration’s presidential bet.

He added: “The PNP is duty-bound to ensure that the safety and general welfare of the public is maintained, both those protesting and those uninvolved. This includes making sure opportunists do not try to take advantage of the situation for personal ends.” (WATCH: Iglesia crowd chanting ‘INC! Hustisya!’)

The INC is known to support political candidates with their bloc votes.

Marcos: DOJ must be impartial

In a statement on Friday, Senator Ferdinand “Bongbong” Marcos Jr sided with the INC and criticized the DOJ.

“The INC certainly has the right to stage a peaceful mass action to express their sentiments in defense of their faith. The DOJ’s handling of the case leaves much to be desired,” Marcos said.

He said that De Lima opted to immediately hold a press conference to discuss the merits of the case “instead of allowing the legal process to take its course.”

“This created the impression, rightly or wrongly, of undue interest in the case. For justice to triumph, the DOJ must not only be impartial in its procedure and ruling; like Caesar’s wife, it must also be seen as being fair to all,” the senator said.

Marcos is reportedly eyeing the vice presidency in 2016. – Rappler.com