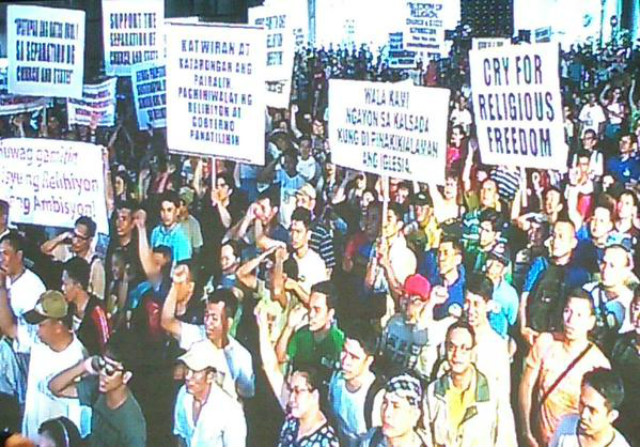 The interview was streamed live over multiple screens during the gathering of INC members Saturday.

The street action calls for De Lima to take her hands off a criminal complaint filed before the Department of Justice (DOJ) against INC leaders.

Cuevas said that by prioritizing the illegal detention complaint, it appeared that De Lima was asking the politically influential homegrown church for something related to the 2016 national elections.

(Now, whatever her reason is, if she has any motive, if she has an agenda, that would be hard to ascertain. But based on the circumstances, it seems she wants something from INC.)

(Because from what I learned from the news she intends, she has a political aspiration.. She didn’t hide this during her birthday when she said from Point J to Point S.)

The INC lawyer was referring to the statement of De Lima supposedly referring to “J” as Justice Secretary and “S” as Senator.

Cuevas is the dean of the New Era University College of Law. He is the son of the late Former Supreme Court Associate Justice Serafin Cuevas.

INC’s mass action was on its third day, with a lively crowd at the intersection of the historic Epifanio Delos Santos Avenue (EDSA) and Shaw Boulevard.

The street vigil started Thursday, August 27, in front of the DOJ in downtown Manila.

Cuevas spoke to NET 25 about the scope of the justice secretary’s responsibilities in relation to the criminal complaint against INC leaders.

(That she even appeared in the press coverage [of the filing of the complaint]. She personally accepted the complaint. Why was it that way?)

Expelled INC minister Isaias Samson Jr, former editor-in-chief of their official publication Pasugo, earlier filed the serious illegal detention complaint. He alleged his family was barred from leaving their townhouse in Tandang Sora, Quezon City from July 16 until the early morning of July 23, lasting for about 7 days.

During the filing, De Lima personally appeared to the Samson family in an encounter reported on national television.

(Why is this complaint special? The filing and receiving of a criminal complaint of a person can be done before a prosecutor… Or it can simply be received at the docket and be brought later to a prosecutor on duty for the swearing in.)

“Putting all these circumstances together, there is a semblance already of partiality, bias, and prejudice against the church, more particularly against the respondents here,” he said.

This is not the first time in recent years that De Lima very publicly and personally entertained and spoke of the importance of a complaint filed before the DOJ in interviews.

On January 27, she said the mauling incident of noontime television host Vhong Navarro (real name: Ferdinand Hipolito Navarro) merited a probe, after she was approached by one of the parties linked to the scandal.

At the height of the issue, then Customs Chief John “Sunny” Sevilla commented that a celebrity’s extortion case should not take center stage.

During Saturday’s INC mass action, a video explainer was shown to the church’s flock which focused on bashing De Lima’s alleged intrusion. It also emphasized the importance of unity within the church.

It also explained the expulsion of certain INC ministers from the church: “Dalhin sa labas ‘yung mga nanggugulo at naghahasik ng pagkakabahagi-bahagi (Take out the people who are causing chaos and spreading division in the church).”

Recently, an apparent church division allegedly driven by corruption within the century-old INC saw the expulsion of the mother and brother of Iglesia executive minister Eduardo Manalo. Younger brother Angel Manalo appealed for help in a video posted on YouTube, saying their lives were in danger.

The filing of the complaint, however, does not indicate automatic indictment.

Respondents are given a chance to file counteraffidavits during the preliminary investigation at the DOJ, before any finding of probable cause can be resolved.

A finding of probable cause will result in a court case. The actual hearings on the criminal complaint against the INC leaders have not even commenced. – Rappler.com