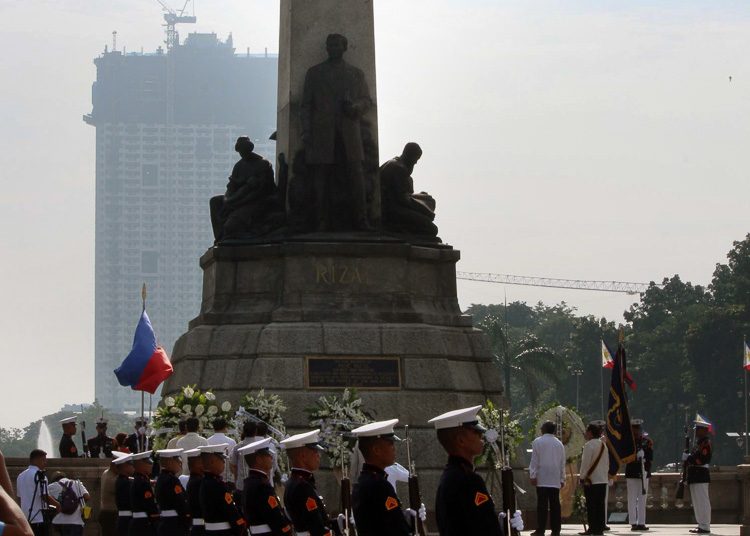 Facebook Twitter Copy URL
Copied
After 6 hearings, the Supreme Court has wrapped up oral arguments on Torre de Manila. Rappler looks back at the progression of the controversy from online petition to the high court.

MANILA, Philippines – After 6 hearings, the Supreme Court has wrapped up oral arguments on the controversial Torre de Manila condominium in Manila.

The 49-story residential project, dubbed the “national photobomber” by critics, is the subject of a petition filed last September 2014 by the Knights of Rizal.

The group wants to have the building demolished because it mars the sightline of the historic Rizal Monument and because it allegedly violated zoning laws in the city of Manila.

Torre de Manila’s developer, DMCI Homes, has denied this, saying that the building sits on private property away from the protected heritage area and was given clearances by city officials.

The issue over Torre de Manila has spanned 3 years, beginning in 2012 when heritage advocate Carlos Celdran began raising concerns over the building.

Rappler looks at the progression of the complaint against Torre de Manila – from its beginnings in an online petition, to being the topic of discussion in the highest tribunal of the land.

The residential project began receiving flak from heritage groups and prominent personalities, like tour guide Carlos Celdran. A Change.org petition also called for the demolition of the “offensive” condominium, which it dubbed “Terror de Manila.”

But in hearings at the Supreme Court 3 years later, Manila city legal officer Jose Alberto Flaminiano admitted that at the time the permits were granted, DMCI had not yet applied for a variance. The approval of the Manila Zoning Board of Adjustments and Appeals (MZBAA) came in 2014.

But 6 months later, the NHCP reversed its stance. City councilor DJ Bagatsing drafted a resolution to suspend this building permit; the resolution was approved by the council.

The NHCP backtracks on its stance: in a letter dated November 6, 2012, NHCP chair Maria Serena Diokno told DMCI that as Torre de Manila sits “outside the boundaries of the Rizal Park and well to the rear of the Rizal National Monument…it cannot possibly obstruct the front view of the said National Monument.”

But Diokno also recommended that an ordinance be enacted designating a buffer zone around Rizal Park to prevent a repeat of a similar “dilemma.”

In March, the Manila city council approved Ordinance 8310, which prohibits any construction or development that would ruin the sightline of all historical and cultural sites within the city.

The ordinance was filed as early as July 2012 by Manila councilor DJ Bagatsing. It would have made it illegal for DMCI to construct Torre de Manila to a height that would impair the sightline of the Rizal Monument.

But a month later, then-Manila mayor Lim vetoed the ordinance “for being ultra vires,” a term which means that the act was beyond the legal power of the city council.

This was done while the council was on recess, and local officials were in the thick of the electoral campaign season.

In November, under the term of current Manila Mayor Joseph Estrada, the city council suspended the building permit for Torre de Manila to allow for a roundtable discussion between DMCI and groups opposing the project. On January 24, the Manila zoning board approved the construction of Torre de Manila, after DMCI appealed for an exemption from zoning laws.

The real estate developer had appealed to Mayor Estrada, citing the permits it obtained from city officials under the previous administration.

In August, the Senate conducted an inquiry into the issue. Senator Pia Cayetano questioned DMCI on its assumptions of “good faith” in constructing the high-rise despite knowing the zoning limitations in the area. DMCI explained that it considered the permits obtained from the city government good enough to proceed with construction.

On September 12, the Knights of Rizal – a group created in honor of the national hero – filed a petition before the Supreme Court, seeking the demolition of the condominium.

The group said the high-rise building threatens to ruin the “visual dominance” of the monument of the national hero.

The petitioner also said the building qualifies as a “nuisance”, and claimed that DMCI built the building in bad faith.

Named respondents in the petition were DMCI, the city of Manila, and government respondents National Museum, National Historical Commission of the Philippines (NHCP) and the National Commission for Culture and the Arts (NCCA).

The Office of the Solicitor General (OSG) represents the government respondents.

In January, the NCCA issued a cease and desist order (CDO) against Torre de Manila because it “destroys or significantly alters” the view of the Rizal Monument.

The NCCA cited the National Cultural Heritage Act of 2009, saying that the Rizal National Monument, Rizal Fountain, Rizal Park, and the Execution Site are “cultural property characterized as built heritage.”

DMCI, however, said only the Supreme Court can stop construction.

In June, the SC issued a temporary restraining order stopping the construction of Torre de Manila. It also set dates for oral arguments on the petition filed by the Knights of Rizal.

Also in June, Estrada openly blamed Lim for signing the permits for the controversial high-rise. Lim earlier accused Estrada of extorting money from DMCI for building permits. DMCI’s exemption from zoning laws, however, was approved in 2014, under Estrada’s term. Among the issues raised and discussed: does the SC have jurisdiction over the case? Should constitutional provisions on heritage conversation be interpreted in a different way? Did Manila city officials follow the rule of law when it allowed DMCI to construct the building? Does NHCP have the legal obligation to stop the construction of Torre de Manila?

In July, the Solicitor General changed his stand on the case, reversing his earlier position that there was no legal basis for the NHCP to stop the construction of the building because Torre sits on private property “way beyond the protected buffer zone of the Rizal Monument and the Rizal Park.”

Under the law, the NHCP can issue a CDO when the “physical integrity” of a cultural artifact is threatened.

Solicitor General Florin Hilbay’s new position was that Torre de Manila is illegal and should be removed because it violates constitutional provisions on the preservation of cultural artifacts.

He argued that in the case of the Rizal Monument, its “physical integrity” necessarily includes its sightline.

The NHCP slammed Hilbay for reversing his position.

In August, the Solicitor General drops the NHCP as its client owing to differences in opinion on the case.

On September 1, the Court held the 6th and last hearing on the Torre de Manila petition.

In a 46-page memorandum dated September 21, the Solicitor General asked the SC to order DMCI to demolish Torre de Manila at its own expense.

The Solicitor General also said the NHCP “acted outside of its jurisdiction” by going against its mandate when it said that there was no legal justification to stop the construction of the building. – Rappler.com