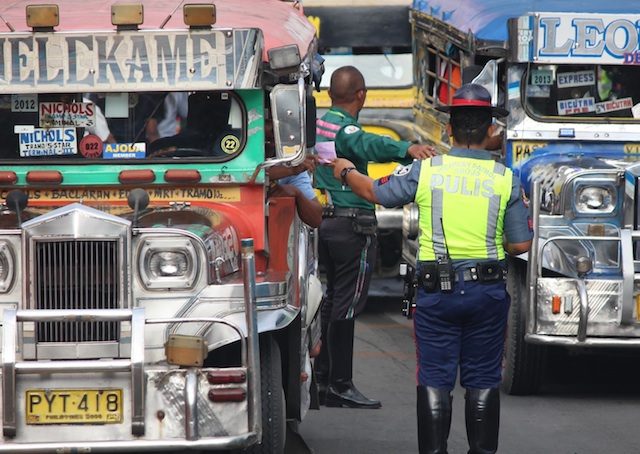 MANILA, Philippines –  As highway police returned to direct traffic on one of Metro Manila’s busiest thoroughfares, the director of the Philippine National Police (PNP)’s Highway Patrol Group (HPG) said 3 of the 6 “choke points” along EDSA were less congested.

HPG director Chief Superintendent Arnold Gunnacao said the deployment of around 150 HPG personnel along EDSA resulted in lighter traffic along Balintawak, Guadalupe, and Taft Avenue – 3 of the 6 identified “choke points,” or areas with heavy traffic, along EDSA.

But 3 other “choke points” – Cubao, Ortigas, and Shaw Boulevard – have yet to see significant improvement, Gunnacao said.

The HPG director faced the House committee on Metro Manila development on Monday to report on the HPG’s first day of deployment along EDSA, one of the government’s latest strategies to ease the worsening traffic in the metropolis.

Gunnacao told lawmakers that by his estimate, travel time along EDSA decreased by 10 minutes, as private motorists and bus drivers seemed to be more hesitant about flagrantly violating traffic rules.

He said motorists seem to regard PNP personnel as having more “semblance of authority” than the traffic enforcers of the Metropolitan Manila Development Authority (MMDA), the agency tasked to direct traffic in the metro.

“Drivers did not look at MMDA enforcers with high regard…They don’t fear members of the MMDA, believing that they don’t have the authority to apprehend and to run after them,” Gunnacao said.

But some lawmakers pointed out that fixing Metro Manila’s traffic woes must go beyond the confines of EDSA.

Buhay party list representative Lito Atienza said enforcers should also direct their efforts and attention towards secondary roads and side streets that, if blocked, would also paralyze traffic on EDSA.

“You must also ensure the clearing of secondary arteries because EDSA will be blocked. If you do not, whatever you do on EDSA will be in vain,” he said.

Atienza pointed out that side streets are often used as parking spaces, with sidewalk vendors taking up a lane or two for themselves.

“Make use of all available road space. I don’t believe we lack space, we just lack enforcement,” he said.

“If you (HPG) say you are limited to EDSA, you are doomed to fail,” he added.

Gunnacao said the HPG is currently tasked to direct traffic only on EDSA, but said he will raise the proposal with other officials in charge of traffic management.

Gunnacao said personnel will be rotated regularly to avoid familiarity with specific areas, with supervisors tasked to monitor HPG personnel.

Asked how he would rate the first day of deployment for HPG personnel on a scale of 1 to 10, with 10 being “successful,” Gunnacao said he would give a rating of 1.

“As of now, as far as my standards are concerned, it’s still 1. That means there will be a lot of improvements to be done to be able to come up with a better outcome,” he said.

He appealed to motorists not to expect immediate results, as some netizens complained on social media that traffic has not improved.

Gunnacao pointed out that around 213,000 vehicles ply EDSA everyday. To see significant results, he said local governments and citizens must do their part by following traffic rules.

“We cannot do miracles in one day. We can’t just ‘magic’ that, we have to do it incrementally,” he said. – Rappler.com