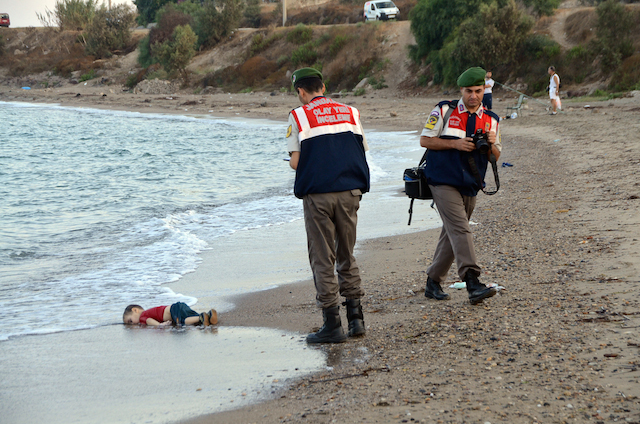 In a recent homily, Tagle pointed out that refugees from Syria, Iraq, and Libya have fled to Europe to escape their conflict-stricken countries – only for many of their boats to sink.

(They’re sinking, but many people played deaf, blind, and mute, until the world’s imagination was stirred by the image of the child.)

Tagle was referring to the heart-rending pictures of the lifeless body of Aylan Kurdi, 3, who is believed to be one of at least 12 Syrians who died when their boats sank trying to reach Greece.

The images of Kurdi, lying face down in the surf at one of Turkey’s main tourist resorts, has once more put a human face to the dangers faced by tens of thousands of desperate people who risk life and limb to seek a new life in Europe.

(His father said, “What’s the use of my life now that I’ve lost my entire family?” Thanks to that picture, many people were touched.)

‘We return the favor’

Tagle – also the president of Caritas Internationalis, the world’s biggest network of Catholic charities – added that he was “very happy” when he learned that the former prime minister of Hungary was trying to help.

Hungary’s former prime minister, Ferenc Gyurcsány, and his family have taken in “groups of refugees who spend a night or two at his home,” the BBC reported.

(His government now doesn’t know what to do. But he decided to open his own house for the refugees. He was the one who cooked, and he also brought to the doctor a child who was sick.)

Tagle issued this message as the Pope on Sunday, September 6, called on every Catholic parish in Europe to take in a refugee family.

Balanga Bishop Ruperto Santos, who heads the migrants’ ministry of the Catholic Bishops’ Conference of the Philippines (CBCP), responded to the Pope’s call by urging Filipinos to donate to refugees.

Santos said as quoted by CBCP News: “This is for us to show that Filipinos are caring people and in solidarity with those who are suffering and in need. Let’s help in our own little way.”

Other countries, after all, also welcome the Philippines’ migrant workers.

“So we reciprocate,” Santos said. “We return the favor. We open our hearts and hands to accept and pray for them. We offer what we can offer.” – with reports from Agence France-Presse/Rappler.com