(After her week-long absence from the Corona trial, veteran senator-judge Miriam Defensor-Santiago attends the start of Week 2’s impeachment proceedings with an invocation.)

I don’t ask, oh Lord, that life may be a pleasant road for me

But I’m terminally bored, the Corona trial is devoid of cerebral colloquy

But may he stop declaiming and start making sense

Or go to Bermuda Triangle and get lost while scuba-diving

Anyway, Frank Drilon can take care of everything for them

But Atty Cuevas should stop copying my hair

I don’t ask that we speak in British Ilonggo

So if we want to call the Chief Justice carabao, let’s not say carabao

With an overwhelming preponderance of evidence, say kalabaw

I may be younger than the Penal Code, but I have sharper memory

If strength shall falter and noses shall bleed

Say the act of contrition and shoot yourselves

But may the presiding officer stop mumbling in Latin

That legal language is as outdated and abstruse as he is

Above all, nobody should make epal during the trial, I pray

After all, I’m the author of Anti-epal Bill. Ako na. Me already. – Rappler.com 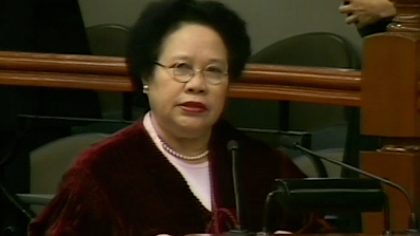