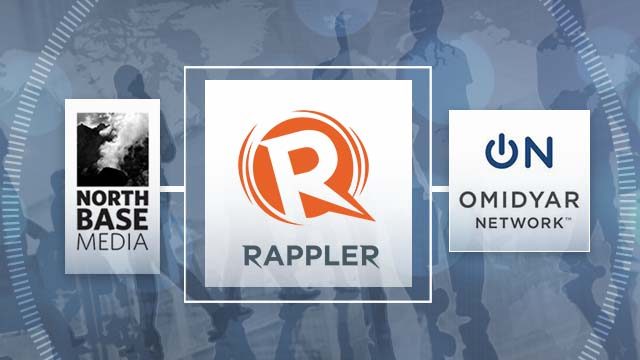 Facebook Twitter Copy URL
Copied
'Rappler is breaking new ground in covering news and developing a reader engagement model that is pioneering and meaningful,' says CV Madhukar, Omidyar Network investment partner. 'We are excited to be investing in Rappler.'

MANILA, Philippines – Rappler Holdings Corporation, the parent company of Rappler, Inc., welcomes Omidyar Network, the fund created by eBay founder and entrepreneur Pierre Omidyar and his wife Pam to help businesses use markets and technology for social impact. Pierre is also CEO and publisher of Honolulu Civil Beat, a local news service in Hawaii that encourages civic participation through media.

Omidyar Network said it invests “in entrepreneurs who share our commitment to advancing social good at the pace and scale the world needs today.” It uses 5 criteria for its investments: alignment, impact, potential for scale, leadership and innovation.

“Rappler is breaking new ground in covering news and developing a reader engagement model that is pioneering and meaningful,” said CV Madhukar, Omidyar Network investment partner. “We are excited to be investing in Rappler.”

Using a patented user engagement model and a community mapping data analytics tool, Rappler tracks how stories and emotions move through its community. It starts with a mood meter on every story, an effort to capture non-rational reactions. Developed with psychologists and sociologists, the mood meter is based on research that shows up to 80% of how people make decisions in their lives is not about what they think but how they feel.

Every vote on the mood meter is aggregated by the mood navigator in the middle of the home page, a novel way of navigating a news site. It’s the simplest of Rappler’s crowdsourcing initiatives which include a collaborative platform for disaster risk reduction and management, Agos, crucial in a country that sees an average of 20 typhoons a year.

Rappler is the first and only media startup in the Philippines to join broadcasting network giants ABS-CBN and GMA in offering Philippine Depositary Receipts or PDRs to international investors. PDRs are financial instruments that foreign funds can buy into, allowing media and other Filipino firms that must keep foreign ownership at 40%, to raise funds globally.

“We are thrilled to have Omidyar Network as an investor, given its commitment to advancing social good through the use of technology,” said Manny Ayala, the Chairman of Rappler’s board.  “The Omidyar Network’s focus on governance and citizen engagement is a particularly strong fit with Rappler. We are confident that such experienced partners will help us in our quest to create an ‘inclusive media’ platform that blends professional journalism, technology and the wisdom of the crowd.”

The largest independent news group in Southeast Asia, Rappler was ranked the Philippines’ 3rd top online news site by Alexa after a little more than a year and a half. It has won numerous awards since then, most recently in October, the UN’s World Summit Awards, which said it’s among the world’s “best and most innovative digital innovation,” the only Asian media group to win the Media & News category.

In the past, CEO Maria Ressa said Rappler was particular about choosing its investors to keep the group free of potential vested interests, especially during an election year. This is part of the reason this round following its seed investment is focused on strategic international investors for 3 key pillars: journalism, technology and civic engagement.

“Omidyar Network believes that a vibrant and independent news media sector is very central to a well-governed democracy,” added Madhukar. “Rappler is a great combination of entrepreneurship and journalism, with someone like Maria Ressa bringing all her journalistic experience to build one of the most promising digital-only news media entities we have seen in the Southeast Asia.”

Ressa spent 18 years with CNN, first as Manila bureau chief, then another decade as Jakarta bureau chief. She was the network’s lead reporter on terrorist networks in Southeast Asia, winning awards for her coverage and documentaries. Her latest book, From Bin Laden to Facebook, was published in 2011, predating ISIS’ skillful recruitment and propaganda efforts on social media which scaled in 2014.

Rappler’s investigative unit is built on the team that created Newsbreak, an investigative news magazine with groundbreaking stories for more than a decade. It’s run by Chay Hofileña, author of the only book on media corruption in the Philippines.

Managing the Rappler newsroom is Rappler Managing Editor Glenda Gloria. One of the co-founders of Newsbreak and former COO of the ABS-CBN News Channel, Gloria is the author of several books on politics and the military.

“Rappler combines the discipline and credibility of traditional print and TV journalists with the pace and knowledge of its milleninals,” said Gloria. “We started with 12 people, most of them young digital natives. Giving them training that bridges the old and the new has put our twentysomethings in leadership positions today.” Rappler expanded to Indonesia, Southeast Asia’s largest economy and the world’s 3rd largest democracy. Its operations in Jakarta are led by news bureau chief Natashya Gutierrez, one of Rappler’s original 12.

“We’re taking the work culture and lessons learned from the Philippines,” said Gutierrez, “and making it uniquely Indonesian.”

Rappler Indonesia’s Managing Director is Uni Lubis, the first Indonesian woman to become editor-in-chief of an Islamic magazine. The former news head of viva.com and TV network ANTV, Lubis has won numerous awards and fellowships, including the Eisenhower Fellowship. She served two terms as commissioner of the Indonesian Press Council between 2003-2006 and 2010-2013.

“The 2014 presidential elections showed me the important role independent media plays in Indonesia,” said Lubis. “Rappler is not afraid to tell it like it is.”

This round of fund-raising will help expand Rappler’s reach in Southeast Asia and other parts of the world, evolve Reach, its community mapping platform, as well as help build new initiatives like blogging platform X, election app PHVote, and the new Rappler Store. – Rappler.com