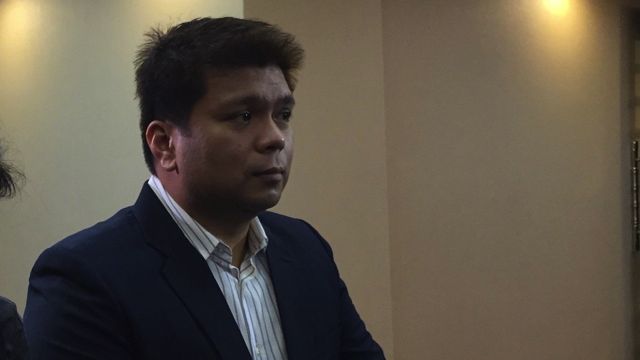 MANILA, Philippines (UPDATED) – Barred from communicating with relatives, faced with threats to his life and worrying about the safety of his family, former Iglesia ni Cristo (INC) minister Lowell Menorca recalled the 3 months of emotional turmoil he experienced, allegedly at the hands of top officials of the influential religious group.

On Sunday, October 25, Menorca faced the media to recount his detention at the INC compound in Quezon City. The former minister, whose whereabouts were previously unknown since late July, said that he and his family were illegally detained by top INC officials, who wanted to interrogate him about those critical of the Iglesia leadership.

“For 3 months we were there, for 3 months we were incarcerated. We were never free to go out even though they promised us we can slowly introduce you to the outward world, slowly everything will be normal. I told them, I don’t want my child growing up knowing we were prisoners here,” he said.

menorca: they were playing with our emotions while in detention pic.twitter.com/9vlZenHLUf

Menorca was previously arrested in Cavite for alleged illegal possession of an explosive. He was released from the Dasmariñas jail on July 26.

On October 21, his brother Anthony and sister-in-law Jungko Otsuka asked the Supreme Court to issue writs of amparo and habeas corpus against INC executive minister Eduardo Manalo and other church officials.

The High Court granted the request, directing Iglesia respondents to produce Menorca and 3 others before the Court of Appeals on November 3.

Speaking to media and accompanied by his wife, Jinky, Menorca narrated the series of events that led to his abduction after a worship service in Sorsogon, to his arrest in Cavite, and finally to detention at the INC compound in Quezon City.

In mid-July, Menorca said he was called in to report at the district office because he had failed to read a certain passage while officiating a worship service.

He was told that the only way for him to resolve the problem was to write a statement pointing to the estranged sibling of INC executive minister Eduardo Manalo as the culprit behind several critical blog posts circulating online at the time.

Menorca refused, and was later told that he would be given a second chance by the INC leader.

But after one worship service, Menorca said he found a group of armed men, purportedly including members of the Quezon City police, waiting for him.

(While they were entering, they saw that I saw them, they ran towards me and said ‘Drop! Drop to the ground if you don’t want to get hurt!’ Their weapons were all pointed at me.)

The former minister said he was then forced into a waiting car, along with 5 policemen and Ka Benefrido Santiago, allegedly the team leader of the operation.

While on the road, Menorca said he was repeatedly questioned and interrogated about Antonio Ebangelista, a pen name of a blogger critical of the INC leadership. He was also asked to name others opposing the church.

Menorca, however, said he didn’t know any of the people behind the online aliases. He also offered to take the blame if only to spare his wife and child from threats against their lives.

“They can shoot me if they want, they can kill me if they want, just leave my wife and my daughter alone. I asked where they were, they couldn’t tell me, they tried to pacify me with words, saying, ‘Okay lang sila‘ (They’re okay),” he recalled.

For 17 hours, Menorca said he endured repeated questions and tight handcuffs cutting into his wrists.

“I asked them repeatedly to loosen the handcuffs because it hurt so much, my shoulders were about to fall off, my hands were bleeding. I kept on begging the police officers to even just remove my handcuffs, I’m not gonna fight them, they were all with guns,” he said.

Attempt on his life

Menorca also recalled an attempt to kill him, after a hand grenade was thrown into the seat beside him while on the road to Dasmariñas.

The grenade, however, didn’t go off. A police officer was then sent to finish the job by shooting him, but Menorca said he was able to beg for his life.

In Dasmariñas, Menorca was charged with possession of an explosive device, a non-bailable offense.

During this time, some INC members said Menorca was abducted, and that the charge was only a cover story.

Menorca later appeared in an interview on INC-run television station Net 25 to deny that he was abducted, but the former minister now says he did the interview under duress. – with reports from Chay Hofileña/Rappler.com