The OFW is worth voting for: Why I believe in Toots Ople

Oct 25, 2015 6:00 PM PHT
Adrian Paul J. Rabe
Facebook Twitter Copy URL
Copied
The son of an OFW shares why there is a need for strong OFW advocates in the Senate

I am the son of an overseas Filipino Worker (OFW). In 1984, the year I was born, my family was whisked away to live in Kuwait where my father worked as an engineer. In the context of growing unrest and the economic downturn of the Marcos Era, it was a decision of desperation and survival.

Eventually, our family had to leave again in the same circumstances, desperation and survival. Saddam Hussein had invaded Kuwait, and our family’s choice was either biological weapons or the desert. We struck out for the border in the desert, only to be halted by Iraqi troops. My father was separated from us. The rest of the family was turned over to the Red Crescent, and was eventually repatriated back to the Philippines. By her generosity, we settled into our aunt’s home in Pangasinan in 1990.

We never knew if Papa would come home. I can remember how my mother got into a deep depression. She cried sometimes, but always tried to remain strong for us, 5 children.

One day, my father finally turned up at our doorway in Pangasinan. It was a blissful reunion, and it seemed like everything was back to normal.

But economic realities and financial need led my father to apply once more for a job in the Middle East. It was Kuwait again for him, a country now needing more engineers to rebuild the destruction wrought by war.

It was his sweat and tears that brought all 5 of us siblings all the way through college, that supported us until we finally became financially independent. I got to be a doctor because my father was an OFW. One can only imagine the gargantuan sacrifice of my father. Just last year, there were 2.3 Million OFWs who made the same decision to leave the Philippines.

Now I find myself abroad once again, this time studying for a year in London. During the past month, I have met many OFWs and students in the United Kingdom, all dreaming of a better future.

In my homesick moments, I look back at all the things we take for granted back home, the special amenities and small luxuries we forget to be grateful for, paid by the price of separation.

In a practical sense, OFWs have had an enormous impact on the Philippines. Over the past 4 decades, OFWs have poured trillions of pesos in remittances into our nation. In 2014 alone, the Central Bank of the Philippines reported that a total of Php 1.20 trillion has been sent back by OFWs through official remittance channels. To give that amount more perspective, the budget allocation of the government in the same year (through the General Appropriations Act of 2014) was pegged at Php 2.265 trillion.

It was that hard-earned money that allowed OFWs to send their children to school, to buy food, to build businesses, to purchase the latest gadgets.

OFWs have singlehandedly uplifted the quality of life of millions of Filipinos. It is their remittances that are fuelling continued domestic consumption which, in turn, is helping businesses in the country get through the economic slump facing the region since the past decade. 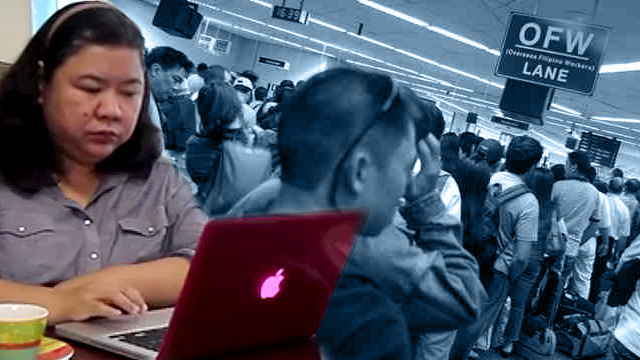 This is precisely why the upcoming elections are of vital importance: We need OFWs to be in the electoral agenda. We need someone who can look after OFWs and their welfare. We need an ally who can reliably take care of the interests of mothers and fathers risking their lives abroad for our own welfare.

We need Susan Ople in the Senate.

For many decades, Susan “Toots” Ople has been working tirelessly to protect OFWs. Toots Ople has brought her Harvard education to good use for the country. She heads the Blas F. Ople Policy Center and Training Institute, managing daily distress calls from OFWs the world over, and helping them reintegrate as productive members of society. Toots Ople uses her voice in broadcast, print and social media to consistently promote her advocacy.

With this consistent performance, it is no wonder that Toots is the recipient of multiple awards, including the 2013 Trafficking in Persons Hero Award from the US State Department, and the 2010 Harvard Kennedy School Alumni Award.

Toots Ople is a time-tested and hardworking servant leader with integrity.

Most importantly, among all the senatorial candidates, it is Toots Ople who has the most clearly articulated platform. In the Senate, she will have the opportunity to set a pro-worker legislative agenda instead of just lobbying for her advocacies from the sidelines.

An important aspect of her advocacies is to relieve the many thorns in the side of OFWs and labourers such as the outdated systems at the Philippine Overseas Employment Administration and the Overseas Workers Welfare Administration, workplace discrimination, the lack of contracts for job-order and temporary workers, and illegal recruitment.

Toots Ople will take her extensive experience as an advocate and transform these into concrete laws binding employers and cementing the direction of Philippine foreign relations. With Toots Ople in the legislative, OFWs like my father would get the attention they deserve, and the protection they are entitled to.

It was thus with enormous elation that I greeted the news that Toots Ople finally launched her bid for the Senate. She had listened and embraced the clamour of the labour sector for a passionate ally in the upper chamber of Congress.

One of the first things I did in the UK was to register at the embassy to vote. Despite being thousands of miles away from home, I could feel the heat of the elections permeating through the autumn chill.

In the comforts of the developing country and behind our own laptop and smartphone screens, we may find ourselves wondering why we should even bother. Why care about that sweltering country with its persistent traffic, unfettered commercialism, irrepressible urbanization, and regressive politics?

We should care because it is our own small corner of the world that we can call home, the place that will welcome us back with open arms and adobo and fiestas. It is the place where we shall be remembered and loved no matter long we’ve been away. It is where our families live and toil day by day. It is the reason why we do what we do, why we work and study so hard. These are our cherished tropical islands, this is our Pearl of the Orient, our Philippines.

I hope that my Filipino brothers and sisters around the world would find a renewed zest for our beloved country’s future. With our vote, let us send back our collective voice, creating a government that would change the Philippines for the better.

Let us help bring Toots Ople to the Senate. – Rappler.com

Adrian Paul J. Rabe is a Filipino physician studying at the University of London for the degree Master of Science in Health Policy, Planning and Financing. He is an advocate for health workers’ welfare, primary care, and population health.

iSpeak is a parking space for ideas and opinions worth sharing. Send your article contributions to move.ph@rappler.com.