“We go through a process. First, we will ask him, ‘This is the accusation against you, how do you respond to it?’ From there, we will proceed to what is stated in the rules, regulations and laws. But it has to got through a process,” Aquino told reporters when asked about the photo that appeared on the front page of the Inquirer on Wednesday, January 25.

Bandera editor Dona Policar took a picture of Llamas buying pirated DVDs from a stall at the  Circle C mall on Congressional Avenue in Quezon City on Monday, January 23. (Bandera is part of the Inquirer media group.)

In her related report, Policar said it took the official, accompanied by two security aides and two women, about 30 minutes to scour through the items before purchasing P2,000 worth of pirated DVDs.

Llamas also figured in a controversy last October 2011 spawned by his possession of 5 guns, including a high-powered AK-47, that was seen by media in his car after an accident in Quezon City.

“So much for ‘tuwid na daan‘,” Twitter user @knightkira said.

Leslie Bocobo (@lesliebocobo) felt Aquino has double standards when it comes to due process: “President Aquino said he will give Ronald Llamas “due process.” What about Renato Corona? Did you ever give him?”

Reacting to Aquino’s kid gloves treatment over the latest scandal his friend Twitter user @tweetnirizal quipped “Noli Me Tangere (touch me not).”

“Aco’y nagbabasa ng diario tungcol cay Llamas sa saliw ng musicang (I was reading the report about Llamas to the tune of) ‘Oops! I did it again’ ni Britney.”

Meanwhile, Manila Standard columnist Elizabeth Angsioco (@bethangsioco) reacted saying “I expect more “from former activists than trapos (traditional politicians). After all, they are there in the name of the people who rallied with them.”

Ronald Llamas is currently the president of the left-leaning partylist group Akbayan. 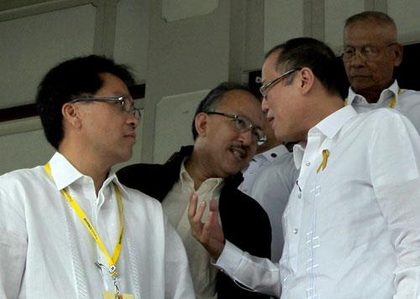 Piracy is low in priority

But Aquino brushed aside the controversy saying that he has more important issues to address.

“You know, we have a lot of problems. So the DVD (piracy) is kind of low in our priority,” Aquino said.

In media interviews, Optical Media Board chairman Ronnie Ricketts expressed disappointment and reportedly plans to meet the President over the weekend to discuss the issue.

Ricketts is actively campaigning against piracy and constantly conducts raids. During the recent Manila Film Festival in which one of the entries was produced and starred by the President’s sister Kris Aquino, Rickets was proud to declare that the festival was spared from piracy.

In an interview with Bandera, the OMB chairman “conceded that the government could not do anything about it when someone—even a Palace official—buys pirated DVDs because the country’s antipiracy law imposes no penalty on the customer.”

According to the President, the government is focused on investigating the recent Makati bomb blast, the attack on fishing boats that killed 15 fishermen in Basilan, and the tension in the Strait of Hormuz in Iran which impacts on oil prices. – Rappler.com