Oct 31, 2015 9:55 PM PHT
Katerina Francisco
Facebook Twitter Copy URL
Copied
Amid the flashing lights and festive mood of the night is an attempt to galvanize the support of the crowd, with ministers and awardees themselves leading the faithful in a chant: 'We are one with EVM.' 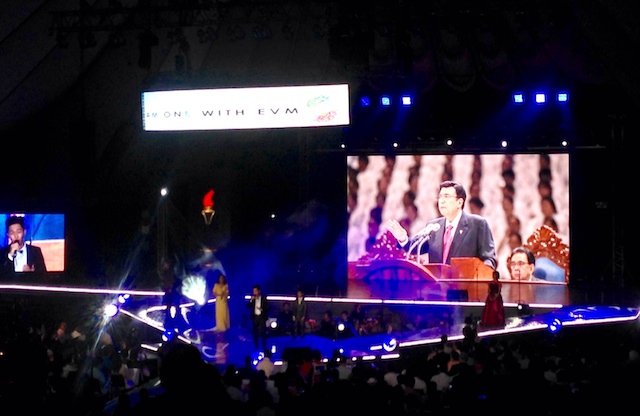 MANILA, Philippines – On the 59th birthday of Iglesia ni Cristo (INC) leader Eduardo Manalo, hundreds of the INC faithful professed their unity for the century-old church, which has been rocked by controversy in recent months.

The INC on Saturday, October 31, held its Excellence in Visual Media (EVM) awards, which recognized the best films produced by INC members.

The awards night coincided with Manalo’s birthday, but the INC executive minister was a no-show at the event.

Instead, general evangelist Bienvenido Santiago read a message from Manalo, congratulating the finalists and urging the crowd to continue following the church’s teachings.

Amid the flashing lights and festive mood of the night was an attempt to galvanize the support of the crowd, with ministers and awardees themselves leading the faithful in a chant: “We are one with EVM.”

In their thank-you speeches, many awardees expressed their continuing obedience to the church, adding that they kept the welfare of their leader in their prayers.

Near the end of the program, one minister also told the crowd that there was no truth to the criticism and allegations facing the church in recent months.

The politically influential church is facing its worst crisis in years, with former ministers accusing the church’s top leaders of corruption and of illegally detaining those who dared to oppose the INC.

In July, the estranged sibling and mother of the church’s executive minister made an emotional appeal for help, claiming that their lives were in danger from members of the church’s top administrative body, the Sanggunian.

A month later, an expelled minister who alleged that he and his family were illegally detained lodged a complaint against top INC officials. This triggered a days-long street protest, with hundreds of the Iglesia faithful staging their vigil outside the justice department, and later occupying the major thoroughfare EDSA – a move that created massive traffic jams and drew the ire of various sectors.

And last week, another minister – who was allegedly abducted after a worship service in Sorsogon, and was briefly jailed in Cavite over charges of illegal possession of ammunition – surfaced to narrate his ordeal.

In his story, Lowell Menorca claimed that he was abducted to force him to expose members critical of the church. He also claimed INC officials wanted him dead, and even made attempts on his life. (READ: INC minister Lowell Menorca: The story of my kidnapping)

Before his appearance, Menorca’s relatives sought relief with the Supreme Court, demanding that INC officials produce Menorca and his family.

The High Court directed INC leaders, including executive minister Eduardo Manalo, to produce Menorca and 3 others before the Court of Appeals on Tuesday, November 3.  – Rappler.com