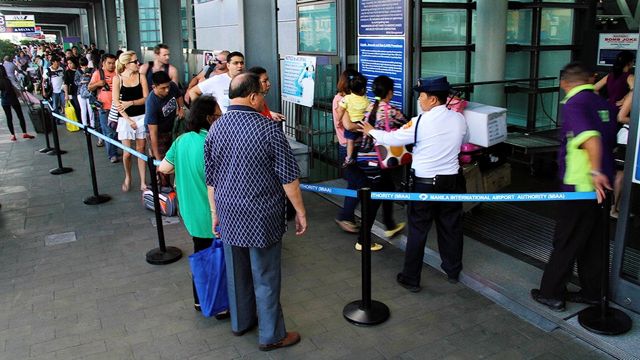 MANILA, Philippines – The Aviation Security Group (AvSecGroup) is the latest Philippine National Police (PNP) unit to be under fire, following a spike in arrests made at the Ninoy Aquino International Airport (NAIA) over bullets found inside passengers’ bags.

But AvSecGroup spokesman Superintendent Jeanne Panisan insisted on Monday, November 2, that airport police have nothing to do with supposed scam happening in the country’s main airport.

During a press briefing, Panisan emphasized that the AvSecGroup is not involved in the screening of passengers and their luggage, making it “impossible” for their personnel to be part of the so-called “tanim-bala” or “bullet-planting” scam.

Airport police only step in after personnel from Office for Transportation Security (OTS) catch an illegal item inside the bags of or on the person of travellers. The OTS is under the Department of Transportation and Communications.

Also on Monday, Vice President Jejomar Binay called for a review of the executive order creating the OTS, citing “overlapping functions” between the OTS and the Aviation Security Group (AVSEC) of the Philippine National Police (PNP). (READ: 40 airport security staff under investigation)

“On its face, there are overlapping functions concerning airport security. We have AVSEC of PNP that is supposed to have operational control over security concerns in our airports, and yet you have an autonomous agency under the DOTC supposedly having sole authority over airport security,” Binay said.

Instead, Panisan pointed to the possibility of passengers simply not knowing bullets were in their bags or person or the Filipino belief in “agimats” (lucky charms) as the reason why bullets were being intercepted in NAIA.

She did admit, however, that cases have spiked recently.

“Ang interpretation natin ay ang ating mga screener ay nagtratabaho po talaga sila, trained sila,” Panisan said, when asked to explain the spike in cases in 2015. (Our interpretation is that our screeners are doing their job, they are well trained)

Another cause for the spike in cases, said the police official, was the implementation of Republic Act 10591 or the Comprehensive Firearms and Ammunition Regulation Act. Panisan explained that, under the law, it doesn’t matter if a person is caught with just one or several bullets when passing through the airport.

An internal investigation by the AvSecGroup, said Panisan, has cleared it own personnel of wrongdoing. All of the incidents caught by authorities, noted airport police, happened during the first screening just before passengers enter the airport.

“Wala siyang posibilidad na matamnan talaga ng bala eh. 10-15 meters lang naman ang layo,” said Panisan, referring to the distance between the drop-off area for private and public vehicles and the first screening point in airports. (It’s impossible for a bullet to be planted because it’s only a 10-15 meter distance.)

At least 40 personnel from the OTS, which is under the Transportation Department, are currently under investigation over the spike in cases. The PNP is under the Department of the Interior and Local Government.

Still, Mayor said the PNP would be open to another investigation of its personnel.

Criticism over the government’s perceived inaction and insensitivity has mounted in the recent days over the “tanim-bala” scheme.

Ties with the President

On Monday afternoon, President Benigno Aquino III met with several key government officials over the “tanim-bala” incidents. Among them, the chief of the AvSecGroup, Chief Superintendent Pablo Francisco “Boyet” Balagtas, who also happens to be a close friend of Aquino’s, according to several sources in the PNP.

Balagtas was a member of the Presidential Security Group (PSG) of Aquino until he was appointed chief of aviation police early this year. The aviation police chief, a graduate of the Philippine Military Academy (PMA) Class of 1985, is said to be close to the President.

President Benigno S. Aquino III met with heads of concerned agencies regarding the alleged tanim-bala incidents at the…

Posted by Official Gazette of the Republic of the Philippines on Monday, November 2, 2015

There were murmurs in Crame that Balagtas was once eyed to head the police force, following the suspension and eventually, dismissal, of Alan Purisima, another friend of the President’s. But Balagtas was simply too junior to head the PNP.

Aquino’s top choice for PNP chief was another police general who was also dismissed from the service, Raul Petrasanta. Director General Ricardo Marquez, a member of PMA Class of 1982, was eventually selected to head the PNP.