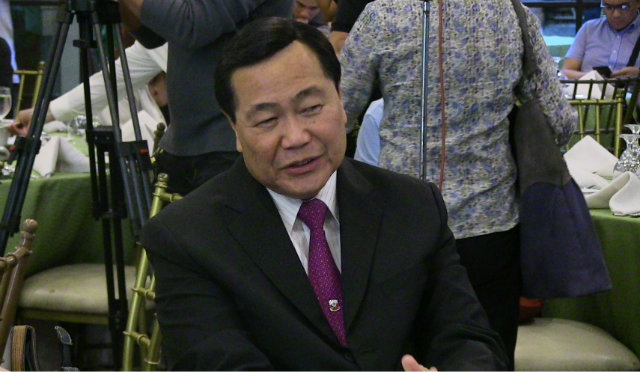 Supreme Court Senior Associate Justice Antonio Carpio said that The Hague-based arbitral tribunal did not consider the 9-dash line in its initial ruling on jurisdiction, the first round of the Philippines’ case against China on the South China Sea. Manila calls the parts it claims as the West Philippine Sea.

(Read the slides from Carpio’s presentation below.)

China uses the 9-dash line to claim almost the entire sea without explaining its legal basis or providing coordinates. The Philippines is asking the tribunal to strike down the 9-dash line as inconsistent with the UN Convention on the Law of the Sea (UNCLOS), the constitution for seas and oceans.

“The 9-dash lines are totally ignored. The tribunal did not consider the 9-dash line. That is an indication of how they will rule. The 9-dash line has no meaning at all, no effect at all,” Carpio said in a media forum in Quezon City on Thursday, November 5.

Carpio made the statement in reference to the ruling on the Philippine claim that one of the features in the sea, Scarborough Shoal, is merely a rock entitled to a 12 nautical-mile territorial sea, and not an island with a 200-nautical-mile exclusive economic zone (EEZ).

This was among 7 out of 15 Philippine claims where the tribunal ruled that it has jurisdiction or the power to decide the case. The tribunal deferred ruling on 7 other claims as these were related to the merits of the case while it asked the Philippines to clarify one claim.

Carpio said that the tribunal found jurisdiction on the Scarborough Shoal claim because this did not involve sovereignty or sea boundary delimitation, China’s two main objections. (READ: EXPLAINER: Philippines’ 5 arguments vs China)

Interpreting the ruling, the justice said: “If you look at the map, Scarborough Shoal is within the 9-dash line but the tribunal said we have complete jurisdiction. What’s the meaning? The 9-dash lines do not generate a maritime zone that overlaps with the Philippine EEZ (Extended Continental Shelf).”

He added: “This implies that if Scarborough Shoal is merely a rock, the Philippines has a full 200 nautical-mile EEZ in the northern sector, excluding the territorial sea of Scarborough Shoal. The 9-dashed lines are totally ignored.”

The legal expert said that the initial ruling provided a “peep into the tribunal’s mind.”

“The existence of a dispute over these issues is not diminished by the fact that China has not clarified the meaning of the 9-dash line or elaborated on its claim to historic rights,” he said.

China seized Scarborough Shoal from the Philippines in 2012, sparking a standoff and prompting the Aquino administration to file the arbitration case against the Asian superpower in January 2013. The waters near the shoal are a traditional fishing ground of Filipino fishermen. 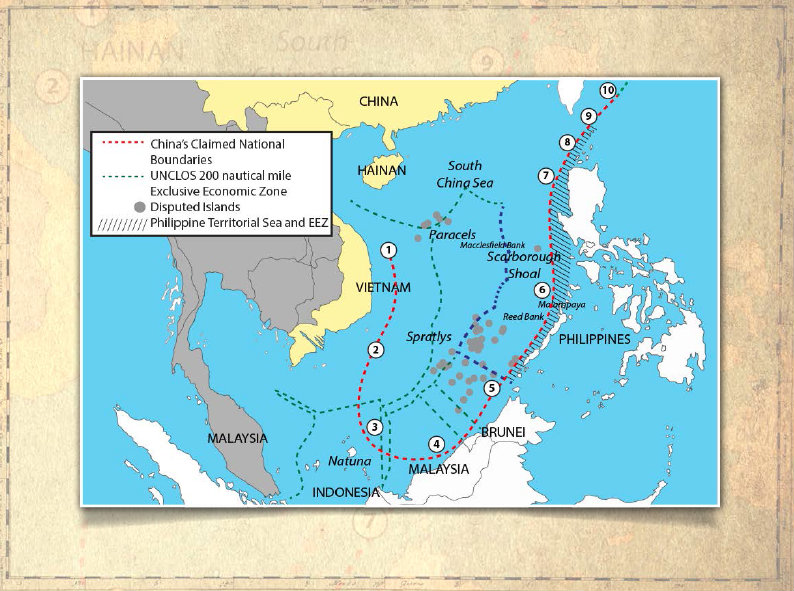 ‘No such thing as 9-dash line’

The Philippines hailed the tribunal’s initial ruling as a victory, while China rejected it as “null and void.”

The tribunal will proceed to the next round – the merits of the case – in hearings from November 24 to 30. China vowed to continue to ignore the proceedings even if both Beijing and Manila are parties to UNCLOS.

This is the first time that a claimant country is challenging China’s expansive claims on the South China Sea through an international legal mechanism.

Vietnam, Malaysia, Brunei, and Taiwan also have claims to the strategic sea holding key sea lanes, and believed to have vast deposits of oil and gas.

Carpio is the foremost legal expert on the South China Sea, and was part of the Philippine delegation to the hearings at The Hague last July. He lectures globally on the issue. (READ: What’s at stake in our case vs China)

Asked to clarify his statement, Carpio said that the tribunal ignored the 9-dash line in the “southern sector” of the South China Sea.

“When I indicated that the tribunal ignored the 9-dash line, I was trying to give you the mind of the tribunal that they don’t really consider it material in determining our EEZ because there’s no such thing as 9-dash line under UNCLOS,” the justice said.

Carpio reiterated his previous statements that the Philippines will win the case, specifically its primarily claim to nullify the 9-dash line. (READ: Rappler Talk: Making China follow the rule of law)

“They will rule on that because we asked them to rule,” he said. “UNCLOS cannot exist with the 9-dash line. The 9-dash line is incompatible with UNCLOS.”

In a position paper released in December, Beijing argued that the tribunal had no power to decide on the case because it was about two issues beyond the scope of the court: sovereignty or who owns the features, and maritime boundary delimitations or overlapping EEZs.

Yet Carpio said that the tribunal sided with the Philippines that the case was about an interpretation of UNCLOS, particularly Manila’s exclusive rights to fish and to create artificial islands within its EEZ.

“It was a total rejection of China’s two principal objections. The case is neither a sovereignty nor a sea boundary delimitation issue,” Carpio said.

Carpio expects the tribunal to issue a final ruling by mid-2016.

He explained why even other countries not parties to the arbitration expressed interest in the case.

Those who sent observers to the July hearing were Malaysia, Indonesia, Vietnam, Thailand and Japan.

Here are slides from Carpio’s presentation on the initial arbitral award:

Justice Carpio on initial arbitral award in PH vs China