MANILA, Philippines (UPDATED) – US President Barack Obama asked leaders of the 11 other countries part of the US-led Trans-Pacific Partnership (TPP) to ensure the speedy ratification of the world’s largest free trade agreement.

Obama met with the heads of state of parties to the TPP in Manila on Wednesday, November 18, on the sidelines of the Asia-Pacific Economic Cooperation (APEC) summit. It was their first meeting since the deal was sealed in October after five years of negotiations.

“We’re going to discuss the road ahead to ensure that TPP is enacted in each of our countries as swiftly as possible. Obviously, execution is critical after we have arrived at the text,” Obama said at the start of the meeting in Sofitel Philippine Plaza Hotel in Pasay.

The TPP aims to reduce or eliminate tariffs on 18,000 categories of goods like rice, sugar, dairy, automobile, beef, and fruits. Part of the deal are Brunei, Canada, Chile, Japan, Malaysia, Mexico, New Zealand, Peru, Singapore, the United States and Vietnam. These countries account for almost 40% of the world economy. (READ: FAST FACTS: The Trans-Pacific Partnership)

The agreement must be ratified in the members’ respective legislatures – a major challenge for Obama as the TPP faces strong opposition in the US where debates will coincide with the 2016 presidential election.

After calling the TPP a “gold standard” when she was secretary of state, Democratic front-runner Hillary Clinton is now against it. Other candidates also oppose the TPP, along with labor groups who believe it will lead to the loss of manufacturing jobs.

Yet Obama made it a point to commend the TPP leaders for agreeing to the deal, and struck a positive note on its prospects.

“This is not easy to do. The politics of any trade agreement are difficult. The fact that everyone here has stepped up and made some hard decisions that are going to pay off for decades to come, I think, is testimony to the vision that was reflected,” he said.

“This is the highest standard and most progressive trade deal ever concluded,” he said.

“It has provisions to protect the environment, to help stop wildlife trafficking, to protect our oceans. These are enforceable provisions that can be brought to bear much as the same way any provisions related to tariffs can be dealt with. And as a consequence, this is not only a good deal economically; it also reflects our common values.”

The TPP is the “economic cornerstone” of Obama’s policy to rebalance US military and economic attention to Asia. Also known as pivot to Asia, the policy is seen as an effort to counter growing Chinese influence in the region. (READ: US-China rivalry on backdrop of Asia summits)

Former chairman of the Joint Chiefs of Staff Admiral Mike Mullen and former National Security adviser Brent Scowcroft, who both served under Republican presidents, were also included in the Friday meeting.

Obama said the discussion with the diplomats focused on the issue that if they fail to get the TPP, “if we do not create the architecture for high standards for this region, then that void will be filled by China, it will be filled by our economic competitors.” 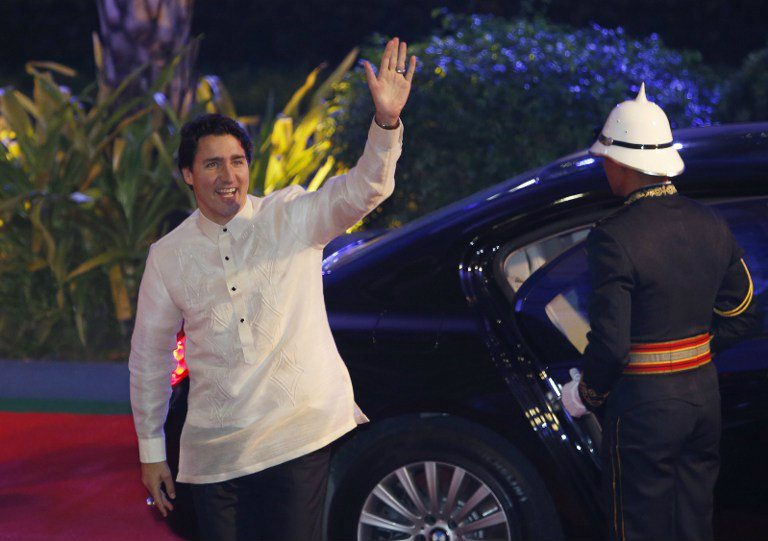 In a joint statement, TPP leaders said they too wanted an “expeditious consideration and approval of the TPP, consistent with each of our domestic processes.”

The leaders said the TPP will:

The statement noted Canadian Prime Minister Justin Trudeau’s plan to hold an open public debate at the Canadian parliament on the TPP.

Taking office only two weeks ago, Trudeau’s Liberal Party won the elections on the promise of thoroughly examining the TPP. The party said that the previous government of Conservative Prime Minister Stephen Harper was not transparent about negotiations on the TPP.

Canada’s new agriculture minister Lawrence MacAulay though has said that he is likely to support the TPP.

The TPP leaders said: “We welcome Prime Minister Trudeau to his first TPP Leaders’ meeting after taking office two weeks ago. We also welcome his commitment to have his new government review the agreement and engage in a consultation process.”

The statement also acknowledged that other countries expressed interest in joining the TPP.

“This interest affirms that through TPP we are creating a new and compelling model for trade in one of the world’s fastest growing and most dynamic regions.”

For a country to be a member of TPP, all 12 members must give approval.

Former socioeconomic planning secretary Cielito Habito said the Philippines might lose out to its neighbors like Vietnam if it fails to join the TPP. Vietnam is seen as a big winner, with the TPP seen to boost key exports like clothing and rice. (READ: Where the PH stands in the Trans-Pacific Partnership)

Others that have expressed interest in the TPP are South Korea, Taiwan, Indonesia, and Colombia. – Rappler.com