Two of a squadron of FA-50 Lead-In Fighter Trainers (LIFT) that the Philippines acquired from South Korea arrived Saturday morning, November 28, at the former US air base in Clark, Pampanga.

The Philippine Air Force (PAF) flew S-211 trainer jets in a diamond formation to meet the FA-50s over Tarlac. A Water Cannon Salute – a ceremony where firefighting vehicles spray water on newly arrived aircrafts – was given to the jets while they were taxiing. Guests and the media witnessed the show.

The arrival of the fighter jets marks the return of the Philippine Air Force to the supersonic age.

The jets were flown to the Philippines by South Korean pilots and will only be formally turned over to the Philippine Air Force after a series of acceptance flights. Another ceremony is expected. 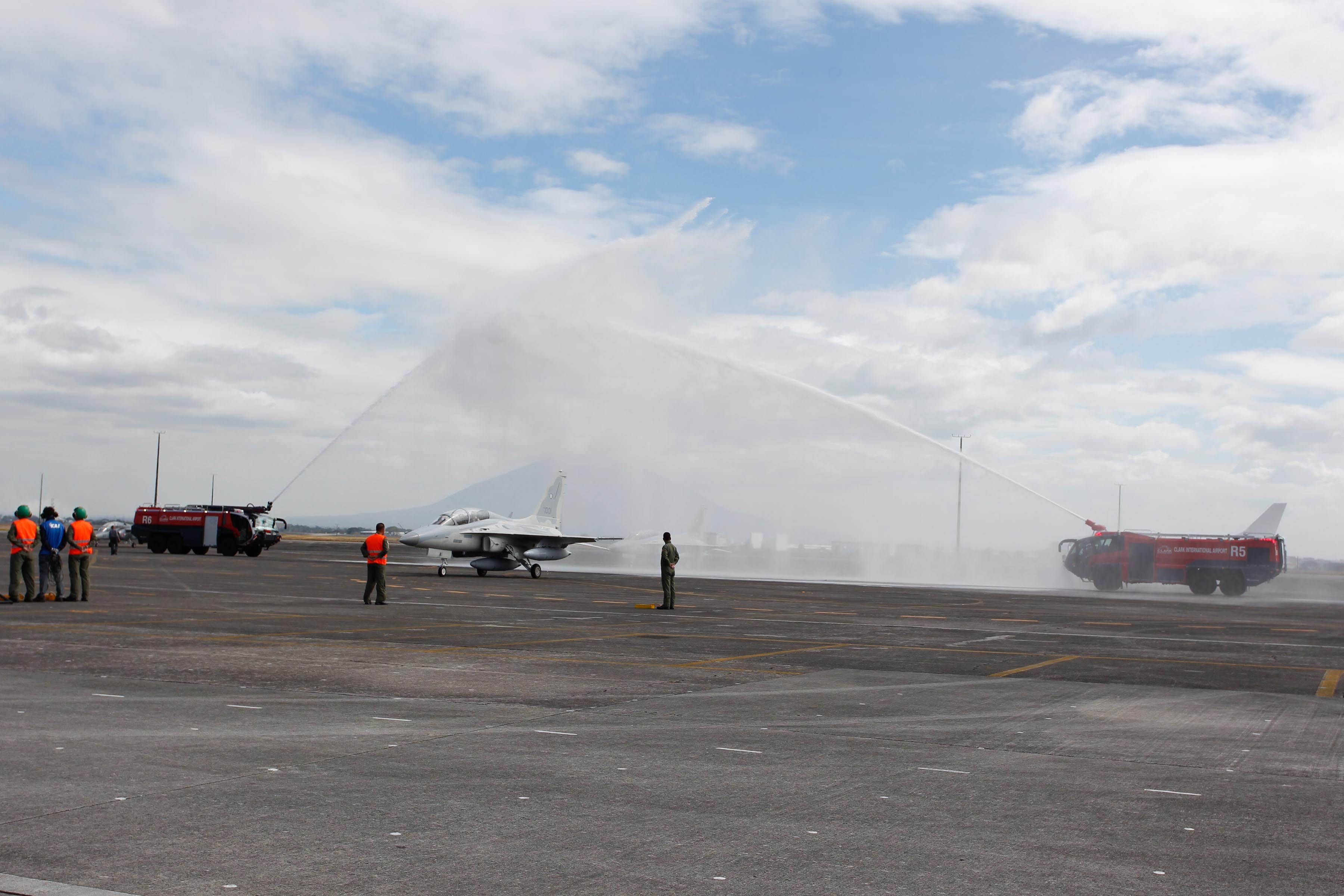 “All air without force” had been a long-running joke after the Air Force retired the last of its US-designed fighters in 2005.

It is one of two big-ticket projects, along with the P18-billion frigates project, funded from the P85-billion ($1.806 billion) initial fund provided by the administration of President Benigno Aquino III under the Revised Modernization Program of the Armed Forces of the Philippines.

The military modernization comes as the country faces the aggressiveness of China in the West Philippine Sea (South China Sea), where it has built artificial islands. (READ: PH to tribunal: China island building destroys seabed)

Strictly speaking, the FA-50 is a lead-in fighter trainer aircraft but it is also called a fighter jet because of its minimum fighter capabilities. The FA-50 design is derived largely from the US’ F-16. This means it won’t be a problem if the Philippines, in the future, gets the money to upgrade to the more expensive designs.

The KAI website describes the FA-50 as a “light combat derivative of the T-50 supersonic advanced jet trainer.”

It can carry 4.5 tons of weapons, including air-to-air and air-to-surface missiles, machine guns, and precision guided bombers, among others. It is also equipped with Night Vision Imaging System (NVIS), Radar Warning Receiver (RWR), and the Counter Measure Dispenser System (CMDS). The country used to have one of the most capable air forces in the region, and was the first to have fighter jets. The Philippine Air Force became famous in 1962 when  its fighter jets – upon the request of the United Nations – helped secure the airspace of Congo, and deal with secessionists.

In 1963, the Air Force also sent its men to Bali, Indonesia, after the eruption of Mount Agung affected thousands.

The country hosted a US air base in Clark, Pampanga, until the Senate voted to evict the US bases in 1991. The Philippine Air Force has since deteriorated. – with reports from Carmela Fonbuena/Rappler.com