To improve traffic in 2016, DOTC to overhaul bus, jeep systems 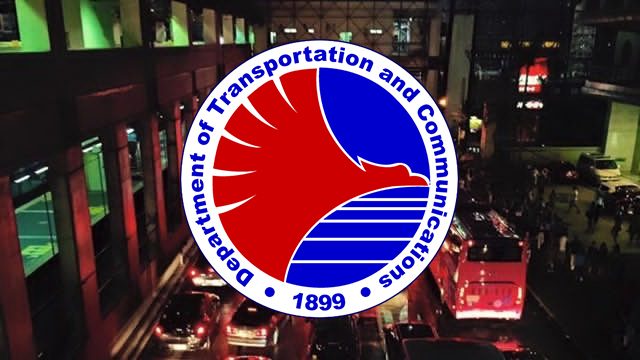 MANILA, Philippines – With President Benigno Aquino III entering his last months in office, one agency hopes to sign off on a high note in the area where the Aquino administration is attacked most: solving metro traffic.

At the eye of the public relations storm is the Department of Transportation and Communications (DOTC). On one hand, it’s trying to get its projects off the ground; on the other, it’s busy putting out the fire for the worsening traffic chaos in the Philippine capital region.

The DOTC is stuck in the planning stage and tends to lag and linger in the implementation, and two years since it first admitted it had a lot of catching up to do to make concrete improvements by 2016, the agency is still in the process of rolling out long-term projects while cooking up quick measures to ease the public’s daily burden.

Over the past year, the DOTC has announced various big-ticket infrastructure projects all aimed to ease congestion: the LRT2 extension projects, construction of the Skyway Stage 3, a proposed Metro Manila subway and its first bus rapid transit (BRT) system, among others.

But all these new developments won’t be up and running by 2016. The full impact, according to DOTC Assistant Secretary for Planning Sherielysse Reyes Bonifacio, will be felt 3 to 5 years from now.

But, she added, that doesn’t mean the Filipino public can’t expect any improvements in their daily commute in the year ahead.

While rail projects are ongoing – including the rehabilitation of the much-maligned Metro Rail Transit (MRT3) – the DOTC is focusing on improvements on buses and jeepneys to reform the most common means of transportation for Filipino commuters. Most developed countries have invested in reliable bus transport services, and with good reason: they’re an efficient way to move more people on limited road space. A city bus can carry about 60 passengers, and occupies the space of 2 or 3 cars that often only carry about one or two passengers each.

But buses don’t enjoy a stellar reputation in Metro Manila – their schedules are unpredictable, they’re notorious for loading and unloading anywhere on the road, and their drivers don’t pay much attention to safety, racing with each other to pick up as many passengers as they can.

So to encourage more people to take the bus, the DOTC has to offer a safer and faster riding experience. In March, express buses hit the road, promising faster travel time to commuters traveling from Quezon City to Makati or Pasay.

The next stage is to launch point-to-point buses, which won’t make any stops at all. Bonifacio said the public can expect this sometime in April 2016, but there’s already an earlier preview of the scheme: the non-stop bus service for the holidays, which will ferry commuters from Quezon City and Mandaluyong straight to the Makati central business district.

The point-to-point system will definitely benefit passengers. But how does DOTC ensure that buses don’t make any stops at all?

“The buses have to have GPS units installed. We already have the software for monitoring, and once the units are installed, it will be operational by April 2016,” Bonifacio said.

The Land Transportation Franchising and Regulatory Board (LTFRB) issued an order for the installation of GPS units in buses in July, but Bonifacio said there had been delays in implementing this.

Once the issues are ironed out, a public transport information management center will be set up at the LTFRB, where officials can monitor and track the buses as they go along the route. Software for the system has been ready as early as December 2013. November’s Asia Pacific Economic Cooperation (APEC) summit in Manila drew irate reactions from motorists, who endured hours of EDSA traffic because of road closures around the metro. The major thoroughfare was also divided, with two dedicated lanes set aside for delegates.

If there’s one positive thing about that setup, it’s that it showed a preview of what a BRT system could look like along EDSA, Bonifacio said.

Instead of seeing the traffic gridlock, motorists might actually find more space. A BRT system would take up lanes on the 23.9-kilometer highway, but the bus-only lanes will cut travel time for commuters, hopefully encouraging car owners to try it out themselves.

A BRT system in Metro Manila and Cebu has long been in the works, but the National Economic and Development Authority (NEDA) board has only just approved the Manila-Quezon Avenue Bus Rapid Transit in December.

With designing and constructing the systems yet to start, Bonifacio said the BRT lines in Metro Manila won’t be operational by the time Aquino’s administration ends in June 2016.

But the DOTC has begun the procurement process for a detailed engineering design consultant for the first line, a 12.3-kilometer BRT that will run from Quezon Memorial Circle to Manila City Hall.

Meanwhile, a conceptual design is ready for the second proposed Metro Manila BRT line, which will run along the length of EDSA. 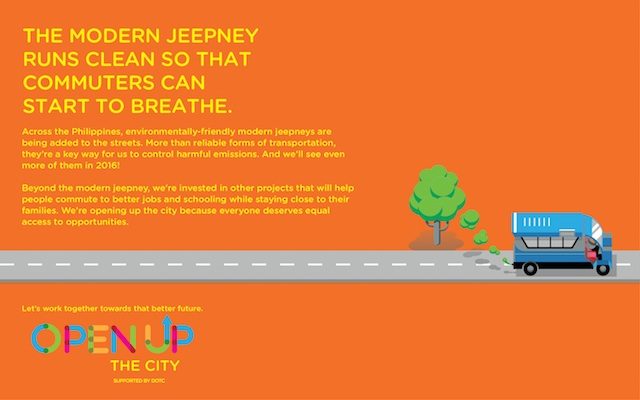 Jeeps: Phasing out of old vehicles

They’re regarded as the kings of the road in the Philippines, and are often appropriated as symbols of the country’s colorful history and culture. But the jeepney, a relic of World War II, has to keep up with the times.

As part of its jeepney modernization program, the DOTC plans to impose an age limit on jeeps. Those that are more than 15 years old will have to be taken off the roads, and operators will have to replace them with brand new vehicles.

The decision on the 15-year-rule was not arbitrary, Bonifacio said. It took into account how supply can keep up with demand, financing issues, and even environmental concerns.

“Transport is the second biggest contributor of greenhouse gases, but that’s only about 37% of total emission levels. Of that 37%, 80% come from jeeps, so we really want to modernize the fleet…. We want to get them off the road,” Bonifacio said.

While the DOTC is mulling a voluntary implementation of the new rule in 2016, Bonifacio said operators can expect its full implementation a year after that.

Jeep operators can still use their old units for one more year, but they have to either present a new vehicle or proof of a loan when they register their units.

Why the gradual implementation? With more than 150,000 units nationwide expected to reach the age limit by 2016, manufacturers won’t be able to keep up with the demand.

“Supply is an issue. The manufacturers’ maximum output is 27,000 new units a year, way less than the 200,000 current fleet size of jeepneys nationwide. In Metro Manila, it’s about 60,000 jeepneys. So what we’re trying to do is a phased approach,” Bonifacio said.

Financing is also another concern. The agency is talking to banks to negotiate flexible terms for jeep operators to obtain loans, but they’re also studying the option of buying back the old jeeps, selling them for scrap value, and providing P200,000 to banks as downpayments for the jeepney operators’ loans.

Phasing out of old jeeps is only one part of the DOTC’s modernization program. The other component is figuring out how to deploy the jeeps efficiently and manage their operations.

Bonifacio said part of the fleet management system that the department is currently studying is a common dispatch program, automated fare collection system, and CCTV and GPS systems in place.

“We need to manage it because most of the trips in Metro Manila are still served by jeeps. To decongest the roads, we need to synchronize the movement of the jeeps,” she said.

This also involves creating a route study to match the demand for jeeps with passengers’ travel patterns.

The last origin-destination survey was done nearly a decade ago, in 1996. While a new study has just been finished, Bonifacio said it will take another year before the department can mine the data and translate it into a route study.

The information will also help the DOTC determine whether old jeepney routes need to be upgraded into bus routes to accommodate more passengers. Aside from focusing on reforms in the bus and jeep systems, Bonifacio said the agency also wants to keep its commitment for a walk-friendly and bike-friendly country in mind.

The goal, according to Bonifacio, is to encourage the public to walk or bike on the last leg of their trips instead of riding taxis or motorized transport.

But for it to really take off, infrastructure – such as protected bike paths and proper sidewalks – need to be built.

Bonifacio said the DOTC has already received a proposal from the Asian Development Bank and Clean Air Asia for a bike sharing program to be funded by the special vehicle control fund that the DOTC administers.

The pilot program will be launched in Pasig City and Marikina City. A bike route has already been identified, which will run along the Pasig River. Cyclists can avoid main thoroughfares, but would still be able to reach central business districts.

The program also includes guidelines for local government units and communities which want to set up their own bike sharing programs.

On implementation and politics

Even with all these plans, the department is treading carefully about implementation. With the elections just a couple of months away, it’s difficult for their every move not to be politicized, Bonifacio said.

And then there’s also the question of continuity: will the next administration be supportive of the contracts, deals, and plans the DOTC has already prepared – or will they go back to the drawing board?

There’s nothing much the department can do if the next president wants to study all contracts and deals entered into by the Aquino administration, Bonifacio said.

“There’s nothing in the system that mandates the next administration to continue with the projects. It’s like everyone is starting from a level of distrust, and historically, it’s understandable because a lot of administrations have entered into disadvantageous contracts,” she said.

“So if you’re new, and coming from that experience, you’d say wait, let’s study this first,” Bonifacio added.

There’s one strategy that the DOTC is trying though: a public information drive that not only promotes the department’s projects, but also doubles as a way to help the public exact accountability from their officials.

“That’s one way to embed it in public consciousness, so that they can ask the next administration, ‘What happened to that project?’” Bonifacio said.

While there may not be many tangible traffic alleviation measures in 2016, Bonifacio stressed that the long-term solutions are still ongoing.

The big-ticket infrastructure projects may be completed well beyond Aquino’s term, but the department is keen on laying out the foundations before the President steps down from office. – Rappler.com