PH must ‘bite bullet’ on charter change for TPP MANILA, Philippines – If the Philippines wants to join the US-led deal to create the world’s largest free trade area, its leaders will have no choice but to lift constitutional provisions restricting foreign ownership.

Analysts from the Washington-based think tank Center for Strategic and International Studies (CSIS) said the Philippines must change protectionist provisions of the Constitution to finish negotiations for the Trans-Pacific Partnership (TPP).

In November, Philippine President Benigno Aquino III asked US President Barack Obama’s support for Manila to join the 12-member TPP. Aquino though remains unconvinced that changing the Constitution is a requirement.

“The Philippines can join but it can’t complete the TPP if you’re going to have constitutional bans preventing foreign companies from owning more than 40% equity in certain areas. That’s just really not gonna work. Vietnam, Malaysia, Singapore, Brunei have all had to bite the bullet on state-owned enterprises. It was quite tough for all of them,” Hiebert said.

The TPP is a trade pact that aims to cut tariffs on 18,000 categories of goods ranging from cars, clothing, to beef. It also sets high standards on labor, environment, competition, and intellectual property. The deal is the “economic cornerstone” of the Obama administration’s strategic rebalance to Asia.

Economists and businessmen point out that the 1987 Philippine Constitution will have to be amended for Manila to be part of the TPP. The charter limits to 40% foreign ownership of public utilities, land, and media companies. (READ: Where PH stands in the Trans-Pacific Partnership)

Changing the Cory Aquino-era Constitution has traditionally been divisive because of suspicion lawmakers will also amend political provisions.

A CSIS report titled “Building a More Robust US-Philippines Alliance” released in August said that the protectionist economic provisions hold back US investments in the Philippines. Other challenges include infrastructure, the high cost of electricity, and red tape.

The report said the US may be the Philippines’ third largest trading partner but economic ties “lag behind their full potential.”

“By volume of trade with the United States, the Philippines is roughly at the same level as tiny Ecuador and Costa Rica, and behind the largest economies in Southeast Asia: Singapore, Malaysia, Thailand, Vietnam and Indonesia,” the report said. ‘Malaysia, Vietnam will take you to cleaners’

Hiebert, former senior director for Southeast Asia at the US Chamber of Commerce, said the Philippines could further boost its economic growth if it joins the TPP.

The Philippine economy grew nearly 6% in the past 3 years under Aquino, with the World Bank hailing it as “Asia’s rising tiger.” In the third quarter of 2015, the Philippines was the third fastest growing economy in the region at 6%, next to China and Vietnam.

‘Vietnam and Malaysia will really take you guys close to the cleaners on garments because their tariffs are going to be 3% or 4%. You’re going to pay close to 20%.’

Yet Hiebert said that Vietnam and Malaysia will edge out the Philippines in the TPP markets, which include the US and Japan, two of the world’s largest economies.

“The Philippines has to make some decisions here. These countries that join the TPP are going to attract investment. They’re going to get easy market access for all manner of things they produce. In Vietnam and Malaysia’s case, they’ll really going to take you guys close to the cleaners on garments because their tariffs are going to be 3% or 4%. You’re going to pay close to 20%. You can’t compete anymore,” Hiebert said.

A former journalist with the Wall Street Journal and the Far Eastern Economic Review, Hiebert compared the TPP to a “best housekeeping seal of approval” that will attract foreign investment to the Philippines.

“When new investment opportunities come along, particularly in the global supply chain that flows from Southeast Asia through China for our iPhones and iPads and all that stuff, the Philippines really won’t work because the companies are going to look for investment where they have that seal that happened under the TPP.”

In 2014, the Philippines attracted $6 billion in foreign investment, up 65% from the previous year. Still, the figure is lower compared to other large economies in Southeast Asia.

Asked about the TPP, Aquino said in November it is still premature to say if the Philippines will have to amend the Constitution.

“Several countries are helping us to prepare for the TPP. Now, it’s hard to answer the question because there are no rules yet so it’s as if I am guessing the requirements. And the rules might still change after they ratify the TPP. Maybe we should wait until they come up with the rules,” Aquino said.

To Hiebert, Aquino or the next Philippine president must consider the proposal. 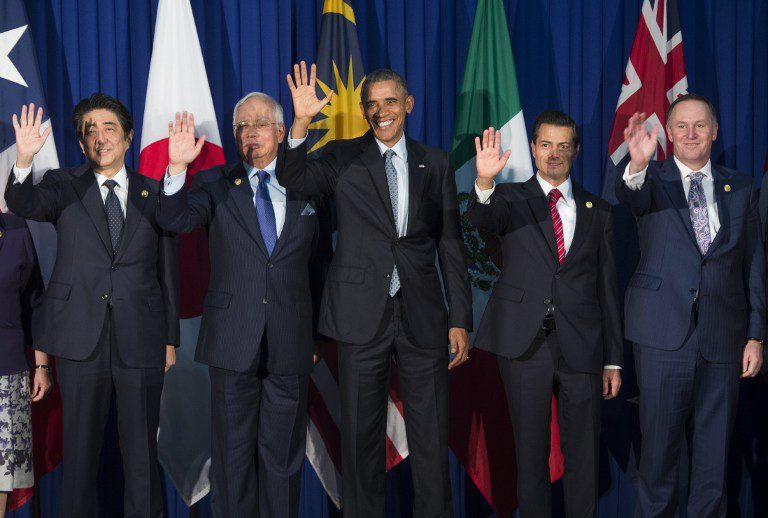 ‘Bridging step for other trade deals’

Beyond TPP, the Philippines is part of negotiations for other trade agreements. Manila is in talks for the Regional Comprehensive Economic Partnership between the 10 members of the Association of Southeast Asian Nations (ASEAN), and China, Japan, South Korea, India, Australia, and New Zealand.

CSIS Senior Adviser Christopher Johnson said joining the TPP will make it easier for the Philippines to be part of the other trade deals.

“It’s important for a country like the Philippines to think about a bridging step between where they are now and the FTAAP. Having TPP or something like that, the standards required there, which are much higher certainly than the RCEP will give you a leg up in terms of thinking about FTAAP,” Johnson told Rappler.

For now, the current 12 TPP members will work on getting the deal ratified in their respective legislatures, a process expected to take years. The Philippines intends to use the time to study the benefits of joining the deal, and policy gaps including the contentious move of amending the charter. – Rappler.com