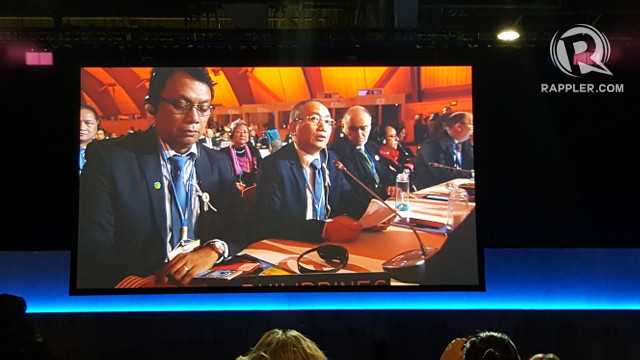 LE BOURGET, France – The Philippines was among the 195 states that adopted the historic Paris Agreement on Climate Change on Saturday, December 12.

He reminded the countries present of the Philippines’ experience on the frontlines of climate change catastrophes like powerful typhoons.

“‘Victim’ is an inadequate word to capture the loss and damage visited upon us. Each body count has a name and an age – is workmate or lover, neighbor or friend, son or daughter, father or mother. It is in this light that the Philippines welcomes the adoption of this historic accord,” said De Guzman.

He was addressing a body that included UN Secretary-General Ban Ki-moon, French President Francois Hollande, US Secretary of State John Kerry, and other heads of delegations.

He called the agreement a “significant stride” in addressing issues that matter the most to the Philippines.

The deal included a 1.5°C warming cap for countries to strive for, a cap that the Philippines has fought strongly for, along with other vulnerable countries. (READ: Full text of the Paris agreement)

“Its 1.5°C goal has defined the global ambition for climate action. Paris has given us 1.5°C to survive and to thrive,” said De Guzman.

He said the deal also “enshrines human rights as its bedrock principle.” In fact, the language used in the agreement compelling countries to consider human rights in climate actions came from the Philippine delegation.

De Guzman lauded the use of the phrase “climate justice,” important to a country with negligible carbon emissions yet burdened with vulnerability to climate change impacts.

“The era of climate justice has come. We are very pleased that for the first time we have enshrined climate climate justice in an international legally binding agreement,” said De Guzman.

Though the Philippines accepts the agreement as a whole, De Guzman said there are still some provisions the country would have wanted in the text. (READ: Paris pact draws cheers, but what’s next?)

These include quantitative targets for the global reduction of carbon emissions, stronger language in making the deal legally-binding, and making permanent a loss and damage mechanism (for countries that can’t keep up with losses incurred from climate-linked disasters).

“Our Paris Agreement may not be as perfect as we want it to be, but it is essentially an acceptable accord. We can build on it and make it better over time,” said De Guzman.

Speaking for his team of 158 delegation members, he thanked COP21 President Laurent Fabius for leading the countries to success.

“You have been a magnanimous leader, attentive to the concerns of the powerful as well as the vulnerable.”

The spirit of solidarity is alive in Paris, despite a terror attack in November that almost derailed the UN climate talks.

Aside from birthing the Universal Declaration on Human Rights and symbolizing love and light, Paris can now add another feather to its cap, said De Guzman.

“Paris is where the countries and peoples of the world, in communion and in solidarity with each other, took decisive action against climate change. For these, we thank you, Paris.”

The adoption of the climate agreement is the culmination of two decades of gruelling climate diplomacy to arrive at a universal, legally-binding deal.

It also ends two weeks of negotiations in Paris where negotiators endured sleepless nights and wrangled with complicated agreement text to arrive at consensus. – Rappler.com