Facebook Twitter Copy URL
Copied
(UPDATED) As of Thursday morning, December 16, the portalet and guardhouse blocking the entrance to the Iglesia compound remain in place

MANILA, Philippines (UPDATED) – The Quezon City Regional Trial Court (QC RTC) has ordered the Iglesia ni Cristo (INC) to clear the entrance of No. 36 Tandang Sora, the property whose ownership is being contested by the children of the late executive minister Eraño Manalo.

The siblings, Angel Manalo and Lottie Manalo-Hemedez, meanwhile, were also directed by the court through their counsels Trixie Cruz-Angeles and Ahmed Paglinawan to submit within 20 days a list of all the occupants and visitors of the Tandang Sora compound.

Presiding Judge Santos also ordered court sheriff Neri Loy to check on Wednesday if a fence had been erected to separate the houses of Angel and Lottie from each other. The sheriff will be disclosing his findings in a report to be submitted within 15 days. (READ: INC’s Angel Manalo to brother Eduardo: Don’t fence us in)

If so reported, the INC will have to “dismantle and remove such structure at its expense to allow access by the occupants of both houses to each other,” the court order said.

This comes after Angeles described before the court how workers entered the compound on Tuesday, December 15, while she and INC lawyer Santos were discussing proposed terms for a scheduled court inspection of the compound.

“During the course of the second discussion, there was a commotion inside the property when some workers were trying to put up a fence. The honorable [court] sheriff intervened and asked the workers to stop, and they did so,” Angeles said.

But when all the parties left the compound sometime in the afternoon, Angeles said the workers proceeded to build the rest of the fences. “The workers were informed duly by the respondents (Manalo siblings Angel and Lottie) and so does this counsel (Trixie Angeles) about the possible illegality of their acts, that such is not covered by the court order,” Angeles said.

“The agreement really is to keep us talking because the judge says that it’s gotten complicated and therefore, the parties should exhaust means to settle the matter. So the talks today are only pursuant to the conditions that will allow us to keep talking,” she added. 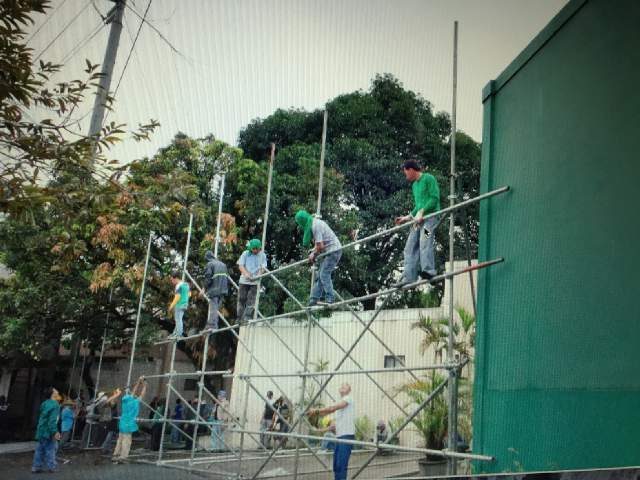 Lottie and Angel were expelled from the Iglesia after Angel and their mother Tenny asked for help and said their lives were in danger. (INFOGRAPHIC: The Manalos of the Iglesia ni Cristo)

This triggered the worst crisis the 101-year-old church has faced in years, with former ministers exposing controversies and alleging corruption among the Iglesia leadership.

Even after their expulsion, however, Lottie and Angel remained in the Tandang Sora property, which both Lottie and the INC itself are claiming as their own. The ancestral home of the late Eraño Manalo is located in the compound, its windows and doors reported to be torn down. A short video clip showing an agitated Angel Manalo indicated as much.

Lottie spoke with expelled INC minister Lowell Menorca II evening of December 15, telling him that the workers indeed shattered the windows and doors of the houses of their parents and their other sibling Marc.

(They are currently destroying the windows and the door of daddy and mommy’s house…My dad’s things are in there, bibles and lessons.)

In September, the influential church filed a petition to prohibit Lottie and Angel from accepting visitors and deliveries to the compound because of security concerns.

The building of the fences was supposedly another attempt to force the Manalo siblings out of the Tandang Sora compound.

A phone conversation between Angel and Menorca at past 11 pm on December 15 revealed that the siblings’ houses had no electricity at the time of the conversation. Power had been cut since December 1 and the submeter still not restored as of Thursday morning, December 17.

(They have trapped us. The generator is outside. We can’t reach our reserve diesel too because they blocked the area where we keep them as well. We don’t have electricity now. We only use candles.)

Angeles confirmed with Rappler on Wednesday her clients’ phone call with Menorca. “Brothers and sisters, friends from media who are in NCR and near provinces, please help us defend the family of Ka Angel and Ka Lottie Manalo as they are being held together with their children in one house which they cannot go out of any more. There are barricades,” one Iglesia member said in a text message to Rappler on Wednesday.

Sympathizers who used pseudonyms for fear of retaliation from the church called on the INC leadership, the Commission on Human Rights, the Court of Appeals, and even the Supreme Court to send help to Angel and Lottie.

On Wednesday, a group of such Iglesia members were seen by Rappler delivering food supplies at the gate of the Tandang Sora compound, including boxes of bread, fruit, biscuits, containers of water, and a bucket of chicken from a fast food restaurant.

As of Thursday morning, December 16, nothing had changed in the situation at Tandang Sora. The portalet and guardhouse continued to block the entrance and insiders said the fences remained. – Rappler.com