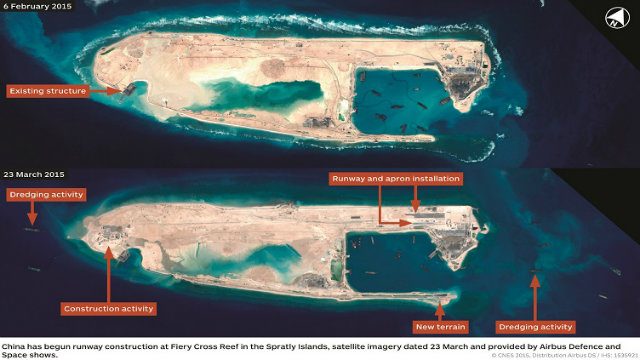 MANILA, Philippines – The Philippines will protest China’s test flight on a newly completed airstrip in an artificial island in the South China Sea.

“We will also be lodging a protest in due course,” Jose said on Sunday, January 3.

Manila filed a historic arbitration case against China before a United Nations tribunal, questioning Beijing’s massive reclamation in the South China Sea, including on Fiery Cross Reef. The Philippines and its treaty ally the United States have urged China to stop island-building and construction activities in the disputed sea.

Yet China’s foreign ministry said Saturday that it finished building an airport in the reef. It said the flight was meant “to test whether or not the facilities on [the airport] meet the standards for civil aviation.”

The flight came after Chinese President Xi Jinping visited Vietnam in November to improve ties between the two communist nations.

Binh said China’s latest move goes against “the common conception of the high-ranking leaders of the two countries, and against an agreement on basic principles for solving maritime issues between Vietnam and China.”

The United States also expressed concern that the test flight will aggravate tensions among claimant countries.

Pooja Jhunjhunwala, a spokesperson for the US State Department, said there was “a pressing need for claimants to publicly commit to a reciprocal halt to further land reclamation, construction of new facilities, and militarization of disputed features.”

“We encourage all claimants to actively reduce tensions from unilateral actions that undermine regional stability, and taking steps to create space for meaningful diplomatic solutions to emerge,” she added.

Malaysia, Brunei and Taiwan also have claims to the South China Sea, a strategic waterway through which $5 trillion in annual trade passes.

One of the world’s busiest shipping routes, the sea is believed to hold vast deposits of oil and gas, and rich fishing grounds.

China’s test flight set the maritime dispute off to a rocky start in 2016.

The move was seen as a sign of Beijing’s growing military capabilities. China repeatedly claims that its artificial islands are for civilian use but US officials said Beijing could eventually deploy radar and missile systems, and even establish an air defense identification zone.

The 3,000-meter airstrip on Fiery Cross Reef is large enough to accommodate most Chinese military planes, according to defense journal IHS Jane’s. It is the first airstrip China built in the Spratlys.

“While this was a civil test, this airport is clearly very militarily capable, and China could presumably start to use it in some capacity at any time,” Andrew Erickson, associate professor at the US Naval War College, told the Wall Street Journal.

In response to China’s increasing aggression, the Philippines resorted to arbitration. Among its claims is to have the tribunal declare that the Fiery Cross Reef is at most a reef entitled to a 12-nautical-mile territorial sea.

The Philippines also boosted its armed forces modernization program, and signed a security deal with the US to improve the capability of one of Asia’s weakest militaries.

Manila and other claimants also have airstrips on the Spratly Islands but the scale of China’s reclamation and construction activities far outpaces theirs. – Rappler.com