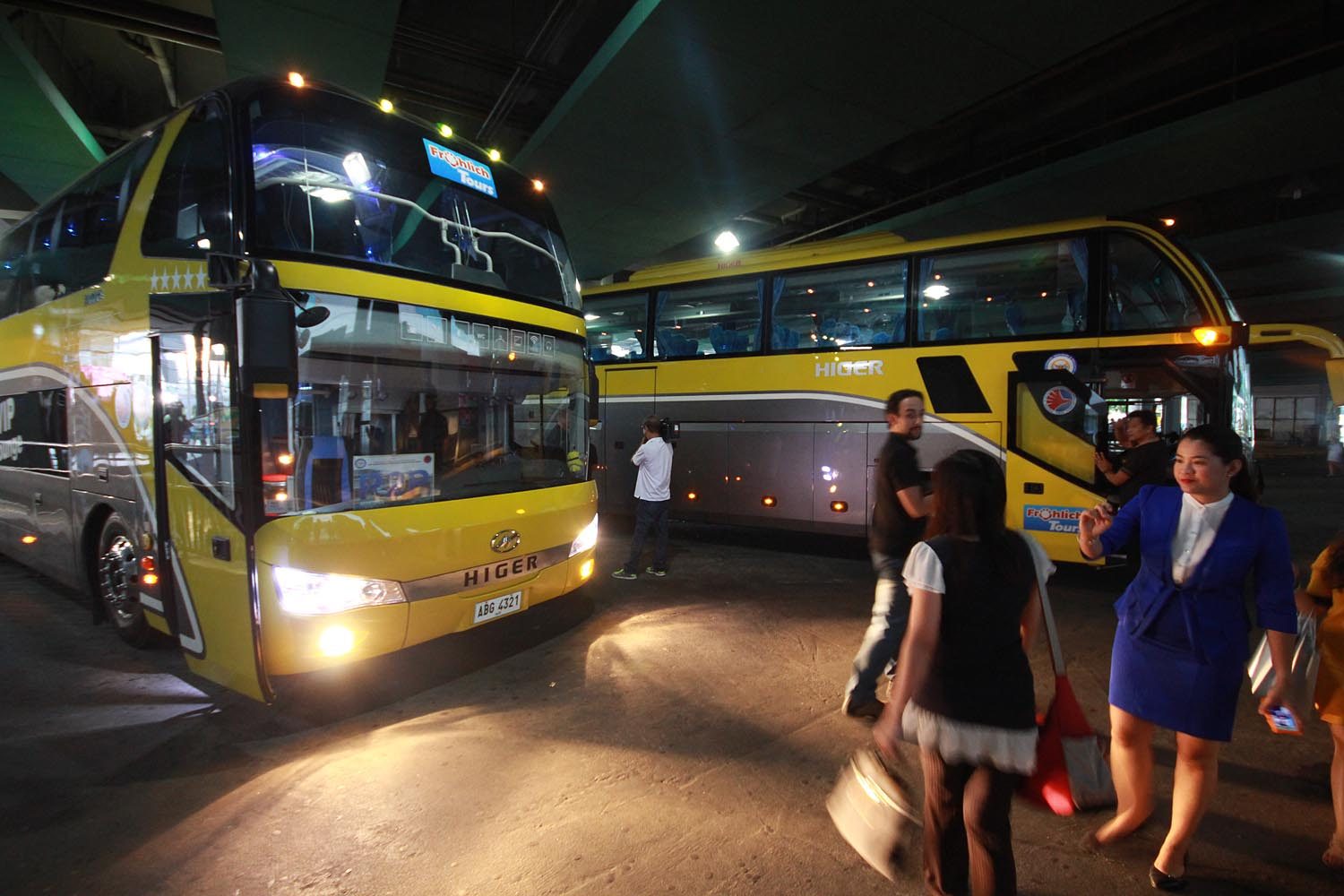 The double-decker bus is airconditioned and is equipped with CCTV cameras and free WiFi. There’s also a VIP lounge and a lavatory onboard.

Transportation Assistant Secretary for Planning Robert Siy said the double decker bus won’t hit the roads regularly just yet – but they’re a preview of what a modern bus system in Metro Manila could look like.

The P2P system, launched in December 2015, promises a faster and more comfortable travel experience for EDSA commuters. The buses don’t make any stops along its route, saving an estimated 20 to 30 minutes in travel time. Passengers also get guaranteed seats, and buses depart on time based on a fixed schedule, whether or not the vehicles are full.

But because the buses don’t have their own dedicated lanes along EDSA, heavier than usual traffic can still add more minutes to commuters’ travel time.

For the Thursday morning dry run, the double decker bus left the Quezon City terminal on time – at exactly 8 am.

It got off to a good start, but slowed down when it approached the Cubao area, where it inched its way along the thoroughfare for about 30 minutes.

The bus sped up slightly after passing Cubao, but again encountered traffic buildup at the Ortigas area, home to malls and offices.

At 9:15 am, the bus pulled up at Glorietta 5 in Makati City. The entire 14.9-km trip took 75 minutes, but some passengers said it was still an improvement from the usual 90 minutes or 120 minutes they spend in traffic.

“It exceeded my expectations because despite the fact that EDSA was very crammed, the ride was very comfortable. It took over an hour to get here from SM North, but it usually takes about two or 3 hours on regular bus trips,” said transport advocate James Mangun.

He added, “A lot of people who take the bus usually expect crummy service, crowds, and heavy traffic. But this one proved that we can actually have quality bus service that can be availed by everyone.”

The premium bus ride costs P55, P20 more than the ordinary city bus fare. But for Beth del Rosario, the convenience is worth the higher price tag.

Del Rosario, who used to spend hours waiting for a ride on ordinary city buses or the crowded trains, said she has been using the express bus service regularly since a friend recommended it.

“Commuters usually don’t have any other options in transportation. But this service is very good. If many people patronize this service, it can be sustained, and other operators will think twice about their own services because there’s something much better,” she said. 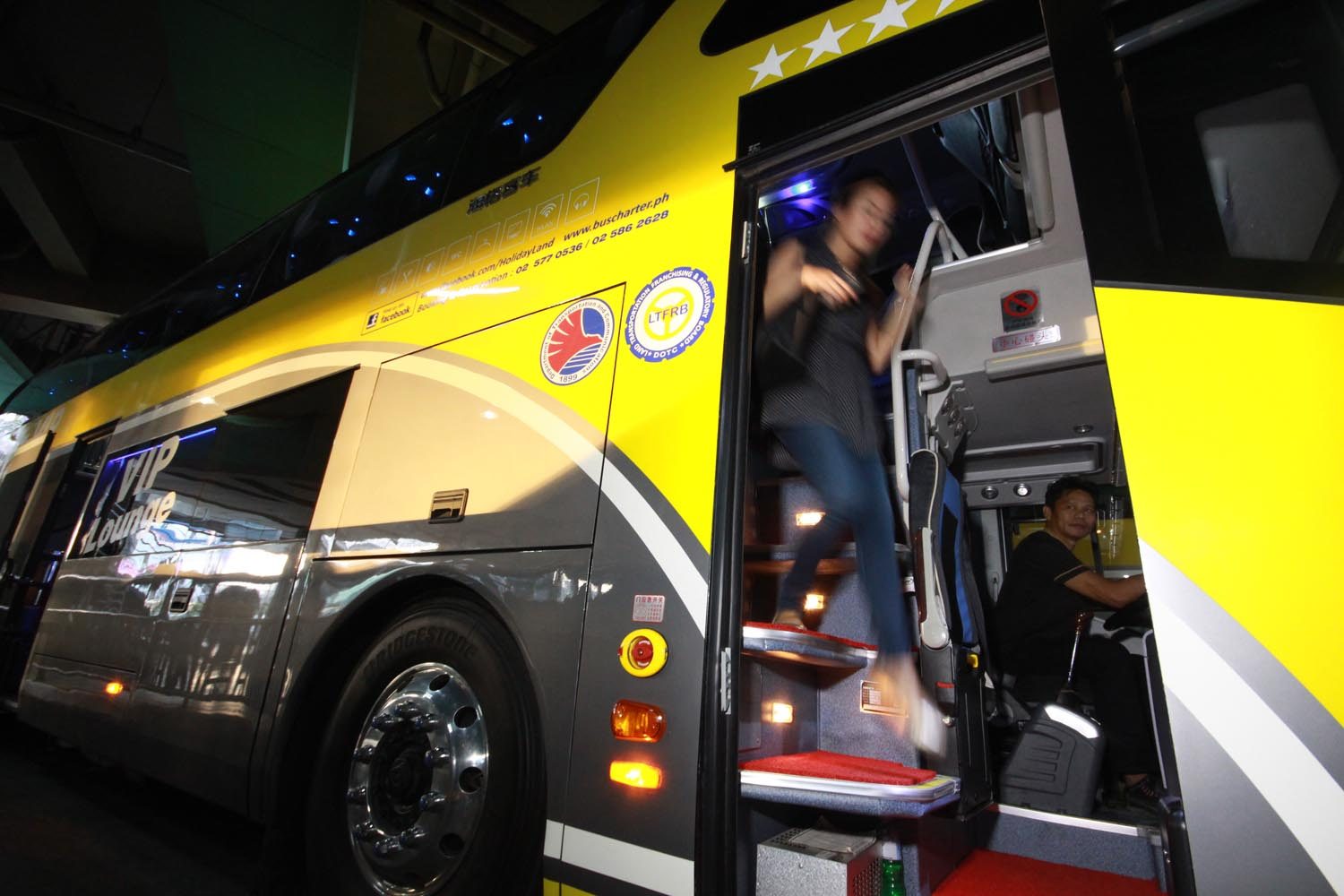 The P2P service currently operates along 3 routes in Metro Manila, but there are plans to expand the service. The Land Transportation Franchising and Regulatory Board is in the process of selecting bus operators for additional routes which would link Makati, the Ortigas central business district, Alabang, and Fairview starting June 2016.

They must also be accessible to the elderly and persons with disabilities. The buses are required to have low floor height ranging from 0.28 to 0.38 meters, space for a passenger with a wheelchair, and a retractable ramp for easy boarding.

Operators are also required to pay drivers a fixed salary instead of the current commission system to discourage competition among buses.

Setting standards for the types of buses that ply the traffic-clogged EDSA is a step in the right direction, Mangun said.

“What they’re trying to do is change the bus culture where it’s hell to ride. So instead of taking your car, why not take this? That way, we reduce actual traffic, because what we don’t realize is that all of us commuting and driving on EDSA is traffic,” he said.

It’s part of the transportation department’s thrust to move more people instead of more cars along the limited road space in Metro Manila. – Rappler.com