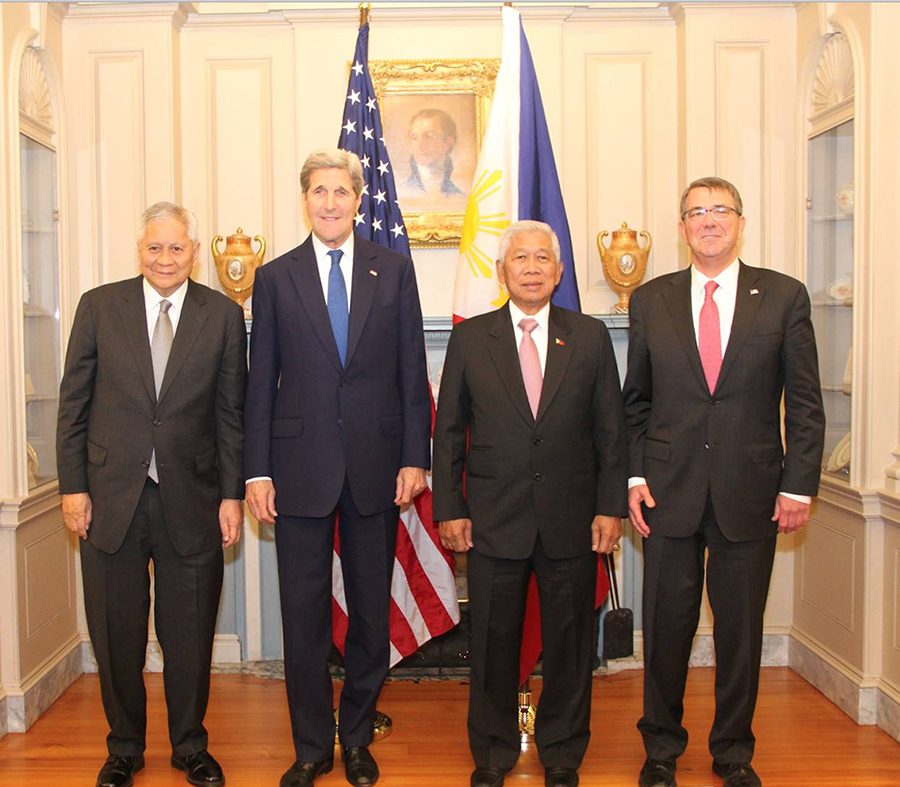 MANILA, Philippines – The Philippines on Tuesday, January 12, vowed to work on the “prompt and mutually beneficial” implementation of the PH-US Enhanced Defense Cooperation Agreement (EDCA), following the Philippine High Court’s decision upholding the constitutionality of the executive agreement.

“The recent validation by the Supreme Court of the constitutionality of the EDCA opens up new opportunities to further deepen our enduring alliance with the US, and we have committed to work towards the prompt and mutually beneficial implementation of this agreement,” Del Rosario said.

EDCA is an executive agreement that gives US troops, planes, and ships increased rotational presence in Philippine military bases, and allows Washington to build facilities to store fuel and equipment there.

Proponents say the deal aims to help build the capacity of the Philippine military, one of the weakest in Asia, especially in the face of challenges posed by the country’s dispute with China in the West Philippine Sea (South China Sea).

Del Rosario said that during the dialogue, which lasted for two hours and 15 minutes, the officials “welcomed the renewed focus on the area of maritime security and maritime domain awareness.”

“In terms of defense and security, we discussed concrete ways to leverage the alliance to contribute to the stability and prosperity of our region,” Del Rosario said.

The dialogue, convened months away from the 70th anniversary of the establishment of PH-US bilateral ties, took place as tensions continue to rise in the South China Sea. (READ: Beijing asserts right to flights to South China Sea)

In his opening remarks at the ministerial consultations, Del Rosario cited the “tremendous progress” made by both countries in further revitalizing their alliance since the first meeting in 2012.

“I believe that our relations are truly at [their] best at this point. One factor behind this is the conscious effort of our leaders to invest in our enduring engagement. Another factor is the emergence of regional challenges that have underscored the need for concerted effort to protect our common values,” he said.

“Our defense and security engagement has never been stronger nor more focused. Our cooperation in the area of maritime security and maritime domain awareness benefits not just for our mutual defense, but also contributes actively to maintaining regional stability,” Del Rosario added. In his opening remarks at the ministerial consultations, the Philippine defense chief noted the “increasingly intertwined” security interests of the Philippines and the US.

“While we grapple with non-traditional security concerns and natural and man-made disasters, traditional security challenges to include territorial and maritime disputes remain to be fundamental concerns. Given this strategic context, we should be in a position to address such common concerns, as well as contribute to regional peace and stability,” said Gazmin.

“It is timely for the Philippines and the US to focus on building a credible defense posture and enhancing interoperability for territorial defense, maritime security and maritime domain awareness, and humanitarian assistance and disaster response,” he added.

Gazmin also noted that the Aquino administration has provided “unprecedented levels of funds” for the Armed Forces of the Philippines’ modernization, in pursuit of its mandate not only “to protect the State but also to fulfill our obligations as an ally and an active contributor to regional peace and stability.”

On the economic front, Del Rosario noted the resolution of issues hampering the growth of PH-US trade ties, such as the termination of the US Generalized System of Preferences (GSP) labor review on the Philippines, the removal of the Philippines from the Special 301 Watchlist, and the reinstatement of the Philippines to US Federal Aviation Authority (FAA) Category 1 status.

“Moving forward, we remain in close consultations with the US on how the Philippines can accede to the Trans Pacific Partnership at the soonest possible time,” the Philippine official said. (READ: Aquino seeks Obama’s help on Philippines’ bid to join TPP)

Del Rosario also said the Philippine officials welcomed the 2nd Millennium Challenge Compact for the Philippines, “which will build on the success of the first compact which has contributed to poverty alleviation, inclusive growth, and elimination of corruption.” – Rappler.com