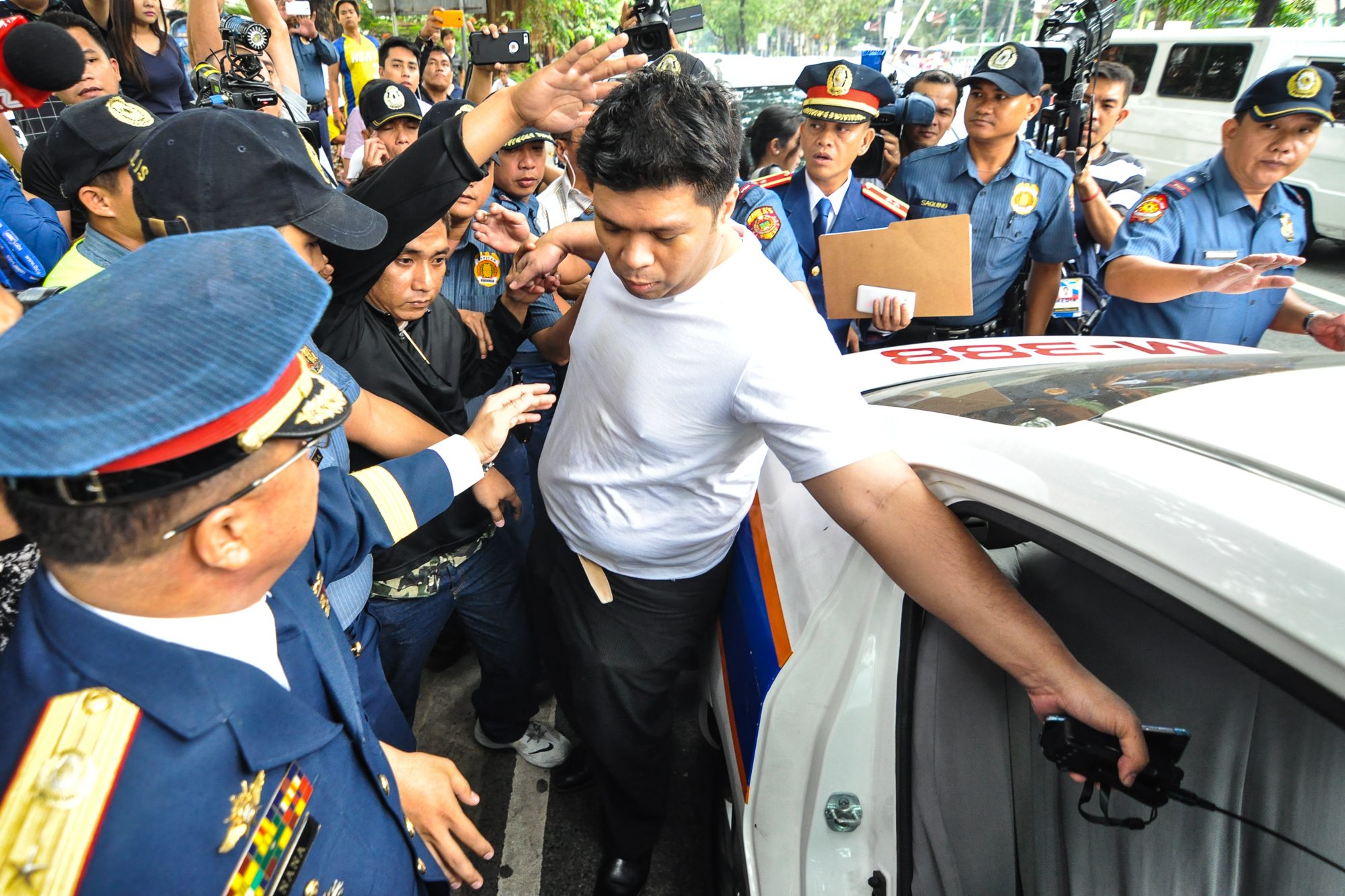 Facebook Twitter Copy URL
Copied
The former Iglesia minister was supposed to appear before the Court of Appeals on Wednesday morning, before he was arrested by plainclothes policemen

MANILA, Philippines – A tearful Jinky Menorca slammed the arrest of her husband, former Iglesia ni Cristo (INC) minister Lowell Menorca II, as the church’s latest attempt to block his testimony at the Court of Appeals (CA).

The ex-minister was arrested Wednesday morning, January 20, as he was on his way to the CA for a hearing on the petitions for writs of habeas corpus and amparo filed by his relatives. Plainclothes policemen arrested Menorca due to a libel case filed in Kapatagan, Lanao del Norte.

(What they’re doing is not right. Is it not enough that they kidnapped and detained us, and now they do this? We cannot fight them. My husband and child are pleading for help from anyone who can help us.)

Menorca was expelled from the INC last year after he accused top church officials of ordering his 3-month detention to force him to expose members critical of the 101-year-old church.

He also claimed that he was abducted and detained by policemen in Sorsogon, who filed charges of illegal possession of explosives against him.

Last month, the former minister was supposed to take the witness stand for cross examination before the CA, but his testimony was postponed after INC lawyers raised objections to his “long-winded” 53-page affidavit.

Menorca was set to present his testimony nearly 3 months since the petitions were filed when the arrest happened.

A standoff occurred at the corner of Roxas Boulevard and Quirino Avenue in Manila, with Menorca refusing to go with the policemen. He also requested that he be brought to the police station by Manila Police District (MPD) Chief Senior Superintendent Rolando Nana himself. Menorca also refused to be escorted by policemen who are affiliated with the INC.

Menorca was later brought to MPD Station 5. His lawyer, Trixie Cruz-Angeles, arrived at the police station past 10 am.

Both Angeles and Menorca said they were surprised by the arrest, saying they have not received notice about a libel case filed against the former minister.

Jinky said the arrest seemed to be an attempt to block Menorca’s testimony at the CA.

(They succeeded in delaying the testimony of Ka Lowell. Why? Why do you want to delay it? If you’re not hiding anything, why delay? Is it not enough that we can have a trial that’s fair for everyone?)

The appellate court, which resumed proceedings past 1 pm, has directed the Manila Police District Station 5 to produce Menorca before the court for the next hearing on January 26.

In a text message to Rappler, Menorca said he was planning to post bail on Wednesday afternoon, but “did not make it on time.”

“I miraculously did not meet the deadline at 3 pm. And the police officers are charging me and the people with me for resisting arrest and obstruction of justice and assaulting an officer,” he said.

Earlier, Angeles said there were “matters that needed to be considered” in the decision to post bail. Among these issues were the manner of Menorca’s arrest, the jurisdiction of the court that issued the warrant, and the warrant itself, which was addressed to a “Lowell Menorca III.” (The former minister is Lowell Menorca II.)

Angeles also said that the incident has scared and worried Menorca’s family, and that it makes their petition for a writ of amparo – a protective writ – “imperative.”

“This case was filed precisely because we are concerned about his safety, so we filed for the issuance of a writ of amparo to protect him. And it is also protection from harassment and all other means that could be interpreted as a retaliation for what he’s alleged to have done vis a vis the Iglesia ni Cristo,” Angeles said.

For its part, the INC denied any part in Menorca’s arrest.

In a press conference in Quezon City, INC spokesman Brother Edwil Zabala said the libel complaint was filed by INC members involved in the church’s medical and rescue units, who were offended by Menorca’s “defamatory statements.”

Zabala also denied that the arrest was an attempt to block Menorca’s testimony in court. He said that the church’s legal team had been “fully prepared” for the hearing and was waiting for Menorca to appear.

“We were dumbfounded upon learning that our name is again besmirched by Mr Menorca,” Zabala said.

The INC spokesman added that the church will be conducting its own inquiry into the circumstances of Menorca’s arrest.

“We implore the public to be more circumspect with their assessment. The INC has confidence in the legal process and we trust that we will eventually be vindicated,” he said. – Rappler.com