Ex-Dominican head on LGBTs: ‘Everybody’s on their journey’ 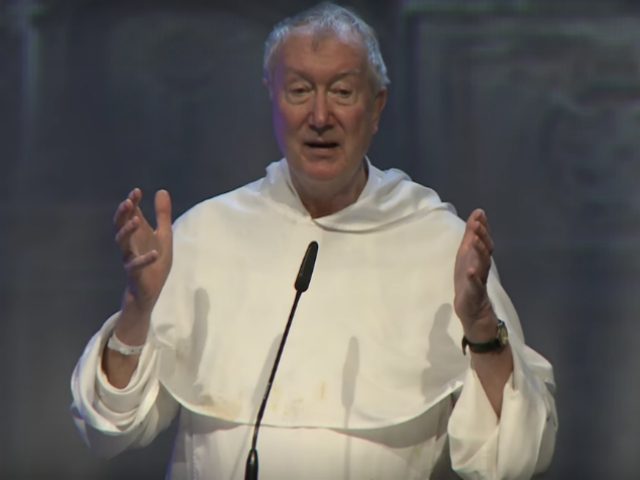 Facebook Twitter Copy URL
Copied
Asking gays ‘what they’re doing in bed’ is none of his business, Father Timothy Radcliffe says on the sidelines of the International Eucharistic Congress

CEBU CITY, Philippines – The former head of the Dominican religious order, known for his controversial statements on homosexuality, said he opposes gay marriage but stressed that Catholics “must be open to gay people.”

In an interview on Monday, January 26, Father Timothy Radcliffe said of Catholics in the lesbian, gay, bisexual, and transgender (LGBT) community: “Everybody’s on their journey, and Pope Francis said, ‘Who am I to judge?’”

Radcliffe said this on the sidelines of the 51st International Eucharistic Congress (IEC), after Rappler asked him what disappoints him the most in how Catholics treat homosexuals among them.

He added that the best thing to do is to “help people as they journey towards God, each person in his own way.”

He addressed thousands of Catholics on Monday at the IEC, a week-long global Catholic congress that aims to discuss the Mass and its impact on society.
(READ: Pope’s envoy at IEC wants ‘World War 3’ vs poverty)

Radcliffe served as the Master of the Order of Preachers, better known as the Dominicans, from 1992 to 2001. His religious order runs schools like the University of Santo Tomas, one of the biggest Catholic schools in the Philippines and the oldest existing university in Asia.

Born in London in 1945, he later became a consultor of the Pontifical Council for Justice and Peace as appointed by Pope Francis.

‘Be open to gay people’

Radcliffe became controversial after reportedly saying of homosexuality in 2013: “Certainly it can be generous, vulnerable, tender, mutual, and non-violent. So in many ways, I would think that it can be expressive of Christ’s self-gift.”

The Catholic Church opposes gay marriage but says Catholics should treat members of the LGBT community with love and respect.

Radcliffe hinted that his statement in the past had been misinterpreted.

“People like to try to find scandal,” he said. “They love to be shocked.”

Radcliffe told journalists: “If you look at what I said, I never approved of gay marriage. I always said the community must be open to gay people, as Pope Francis said, as my own cardinal archbishop in England says. We must be open to welcome anybody. But I never said I believe in gay marriage.”

“But you see, some people like to sniff out heresy. Usually it’s their own invention,” he said. – Rappler.com