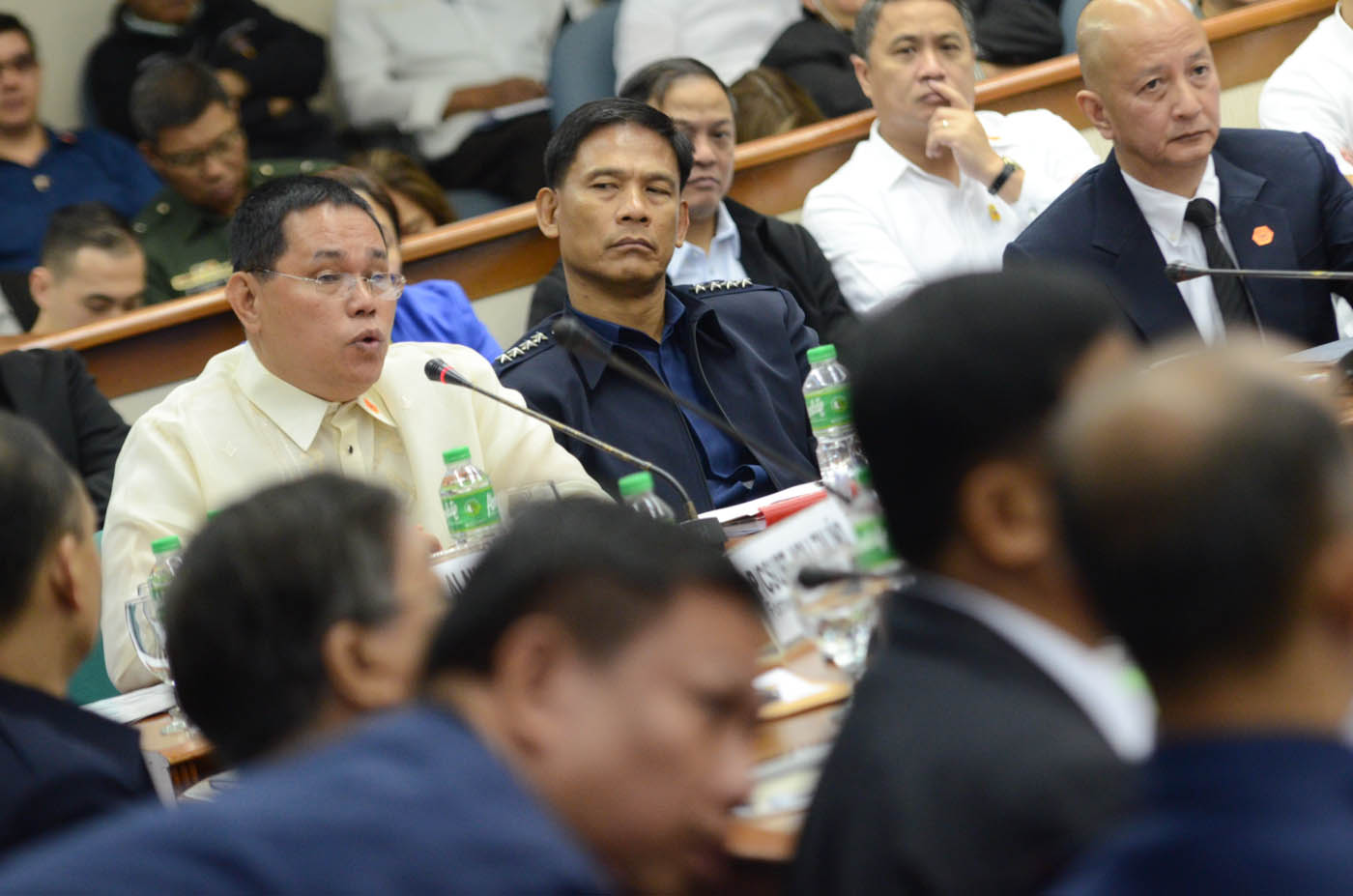 MANILA, Philippines – It was a probe that was supposed to pin down President Benigno Aquino III in a police operation that claimed the lives of more than 60 but towards the end of an hours-long hearing, it was the former chief of the country’s elite police unit that was on the receiving end of harsh words from the military.

Senate Minority Leader Juan Ponce Enrile, out on bail for allegedly pocketing his pork barrel, had vowed evidence that Aquino was well aware of the operation since its planning stage.

During the crucial hours SAF troopers were cornered by hostile elements, Enrile insisted Aquino “did not do any effective action as president of the Republic of the Philippines to prevent [their] barbaric slaying and slaughter.” 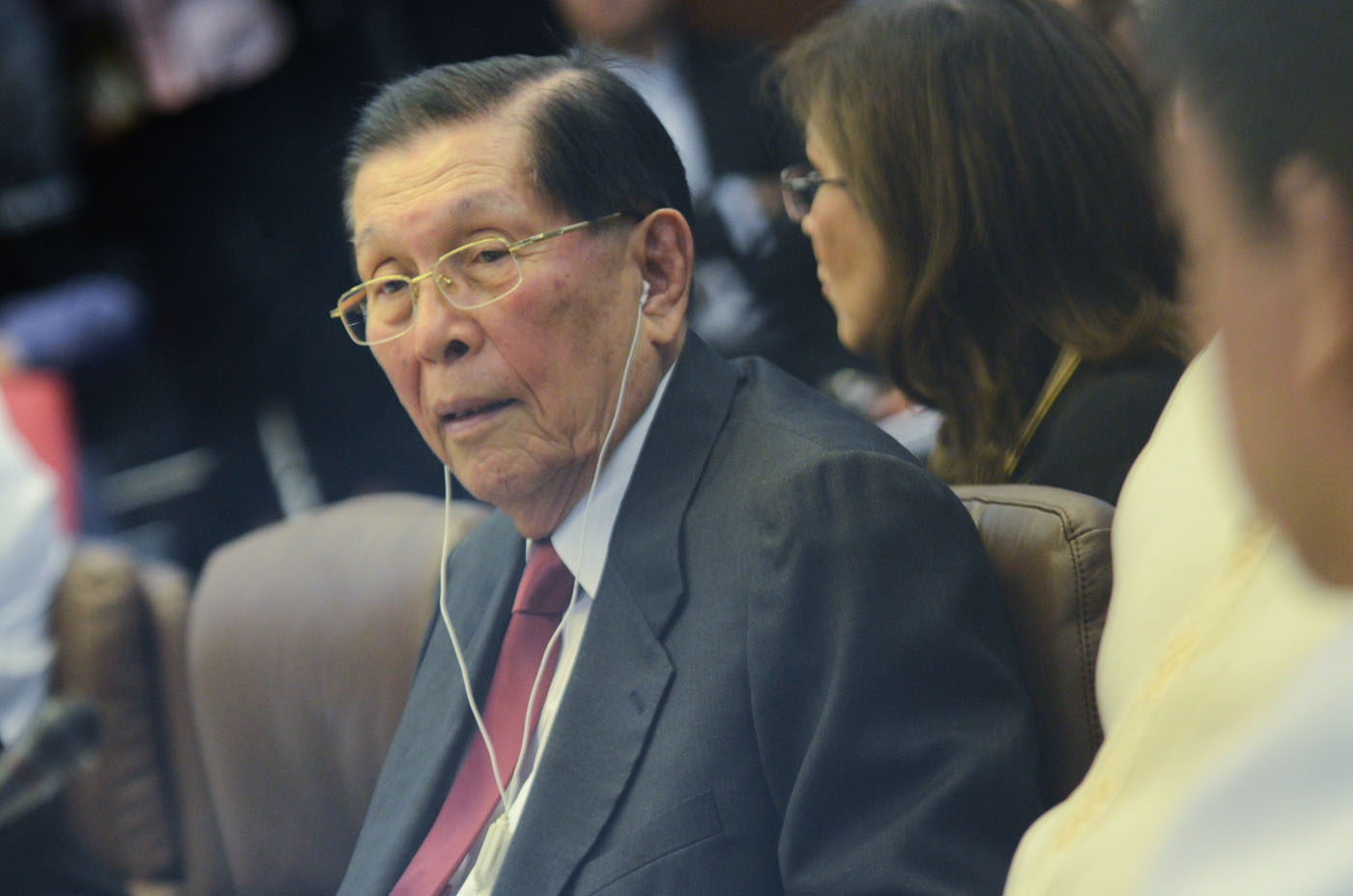 The veteran senator, defense chief under the regime of the late dictator Ferdinand Marcos, outlined his 8 assertions at the start of the hearing.

His last conclusion? “To shield himself from any accountability, Aquino deliberately hid or was hiding himself behind PDG Purisima,” said Enrile, referring to former PNP chief Alan Purisima, a close friend of Aquino.

Purisima was preventively suspended over corruption charges when Exodus was executed. He has since been dismissed from the service and faces criminal and administrative charges.

Amid insinuations from Aquino’s allies, Enrile insisted politics was not his motivation in asking for the probe’s reopening.

“I am here to fulfil a promise made while incarcerated in Camp Crame – to SAF who survived this ordeal. I vowed to them then that if ever I’d be given the chance to get bail, I will seek justice for them and for all those who perished,” he said.

Enrile was detained at the PNP General Hospital, which also housed several SAF survivors in the aftermath of the clash.

In laying down the foundation for his argument and in interrogating resource persons, Enrile repeatedly used the word “compartmented” to describe how Aquino, his friend Purisima, and then SAF chief Getulio Napeñas allegedly treated the top secret operation.

Enrile spent the first few hours of the hearing zooming in on Aquino’s role in the lead-up to the January 25 operation. The SAF had long been chasing after Malaysian bomb maker Zulkifli bin Hir (alias Marwan).

Napeñas himself had been involved in operations against the wanted terrorist even before he rejoined SAF as part of its command group.

During the deliberations, several facts were re-established: that Exodus was only the latest in a string of operations launched by SAF to neutralize Marwan and another bomb maker, Filipino Abdul Basit Usman. 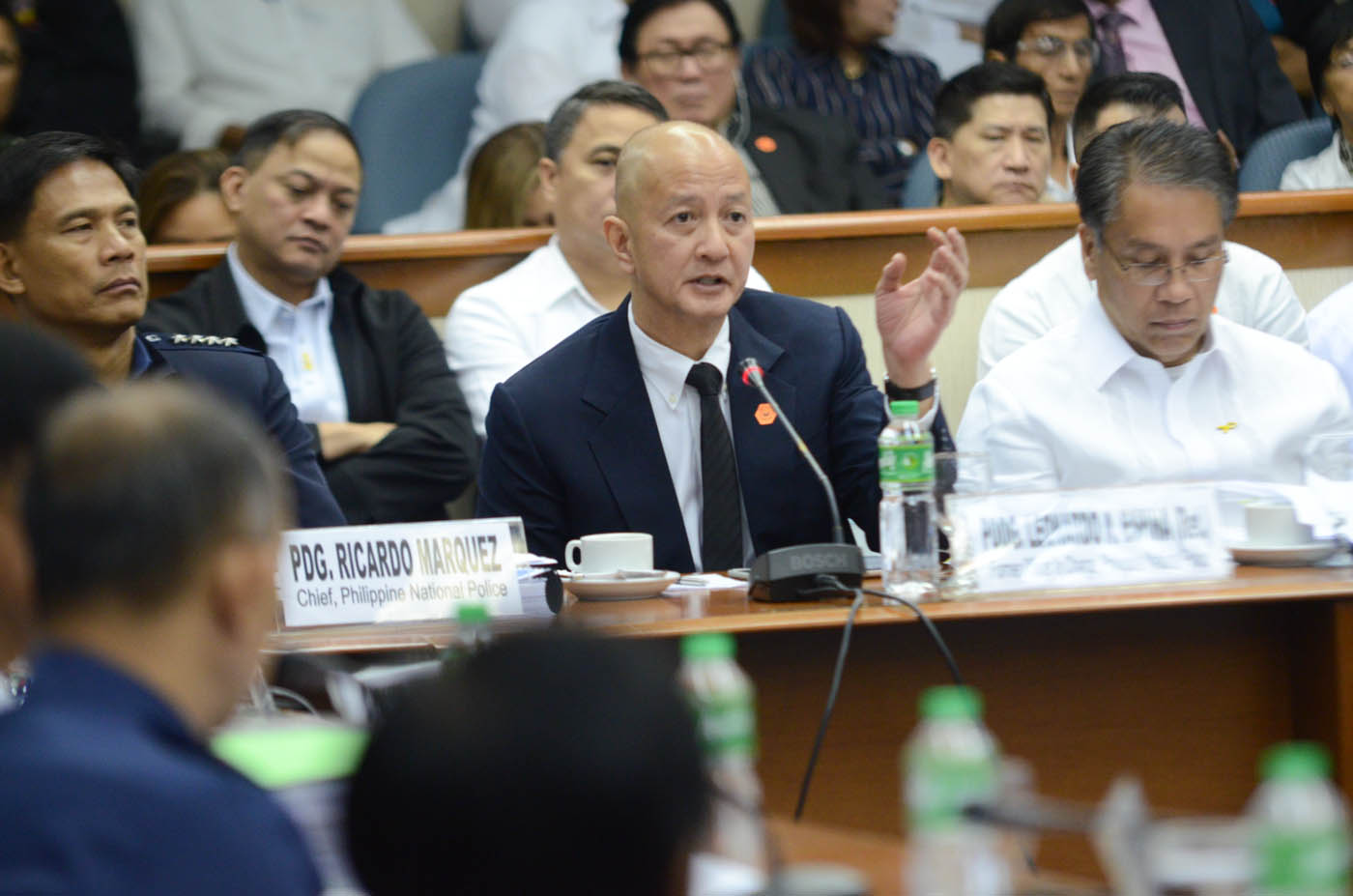 The SAF had, in fact, briefed Aquino, Purisima, then Interior Secretary Manuel Roxas II, and other top PNP officials, on the sidelines of a command conference in Camp Crame late 2014.

That was the last time Roxas and other PNP officials would be given a full briefing on the operations against Marwan. In late 2014, Purisima instructed Napeñas to retrieve an intel packet from Intelligence Group head Chief Superintendent Fernando Mendez.

It was from that packet that the SAF eventually built Exodus. On January 5, the SAF gave Purisima a full briefing of the operation – even if he was already weeks into serving a preventive suspension order from the Ombudsman.

On January 9, Purisima, Napeñas ,and Mendez went to Bahay Pangarap, the President’s official residence, to give Aquino a full briefing. Purisima said he was there to be a “facilitator” between his friend and the SAF.

Purisima’s easy access to the President was at the core of Senator Nancy Binay’s queries at the hearing. “Is it not difficult to get an appointment with the President?” she asked.

“I am not the appointments secretary,” Purisima answered wryly.

After further prodding, Purisima confirmed he asked for the appointment himself. When asked how he was able to do this, the dismissed police general admitted: “Sa mga nakakakilala sa ating Pangulo, they can see the President kung available siya (Those who know our president can set a meeting with him if he’s available).”

Purisima briefed Aquino about one botched SAF operation inside the Malacañang shooting range late 2014 or early 2015.

In the days and weeks immediately after the botched operation, Aquino and his allies downplayed his involvement in the operation. But subsequent testimonies and documents showed otherwise.

Aquino was fully aware of the SAF’s plans, including its controversial decision to keep the military in the dark.

This was something Aquino had a problem with. “There were two issues. The one what we already discussed – coordination with the AFP – and second, the strike to be increased,” said Napeñas, when asked by Enrile if Aquino had objected to the SAF’s plans.

But the police generals present had qualms over involving the AFP because it was “compromised.” (READ: Don’t you trust AFP? Aquino asked Purisima, Napeñas)

How did the President react to that? “The President sat in silence, then directed the police officers to beef up the operatives who will be deployed for the high-profile and dangerous mission,” the PNP’s Board of Inquiry (BOI) noted in its report released last year.

Napeñas made adjustments. Instead of 160, he deployed close to 400 SAF troopers for the operation.

“President Aquino deliberately compartmented Oplan Exodus to himself and PDG Purisima,” said Enrile, also asserting that Aquino was “approving authority” of the operation. The President himself has admitted to “approving” the operation but said had he known of the other details, he would have not done so.

Noticeably absent from the final briefing on Exodus were other high-ranking police and security officials, including interior chief Roxas and Leonardo Espina, then PNP officer-in-charge.

Current PNP chief Director General Ricardo Marquez, Directorate for Operations chief at the time of Exodus, pointed out that the operation could have gone through “full scale contingency planning.”

After the SAF briefing, Mendez and Napeñas left Aquino and Purisima to converse privately. 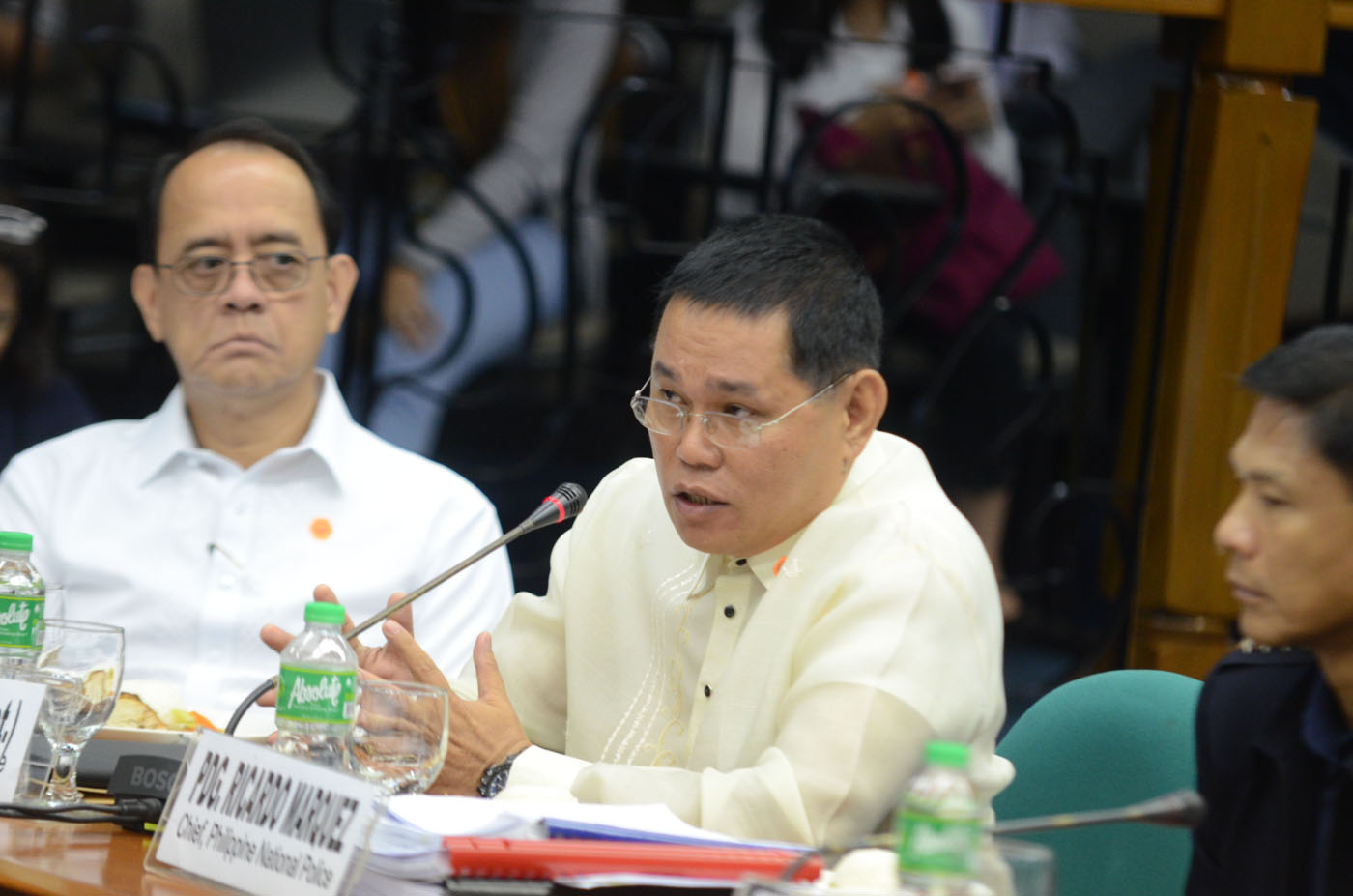 After that huddle, Purisima then“advised” Napeñas to inform Roxas and Espina “time on target” or only after the target had been hit. He also said he would “handle” then AFP chief Gregorio Catapang.

Napeñas took this to mean Purisima would handle coordination with the military – a crucial component if the SAF wanted support in the form of artillery or air assets.

But what Enrile and other senators failed to press was this: Why did the President allow Purisima, suspended over an allegedly shady deal in Camp Crame, to join the briefing in Bahay Pangarap?

Aquino’s allies have defended the President by saying he wanted other security officials in the loop and that Napeñas blatantly disregarded these instructions.

During Exodus: Stand down order?

“During their execution of Exodus, Aquino was fully aware of what was going on,” Enrile said at the beginning of the Senate hearing.

But before Aquino arrived in Zamboanga, he was told about the operation by no less than Purisima. The text from the dismissed police chief was sent past 5:30 am but wasn’t read by Aquino until a few hours later because his phone was turned off.

Aquino was told the window of the operation would be between January 23-26.

“President Aquino was actually intentionally and directly dealing with a person who, before and at that time, was not an active part of the command system of either the AFP or PNP,” Enrile said, referring to Purisima. 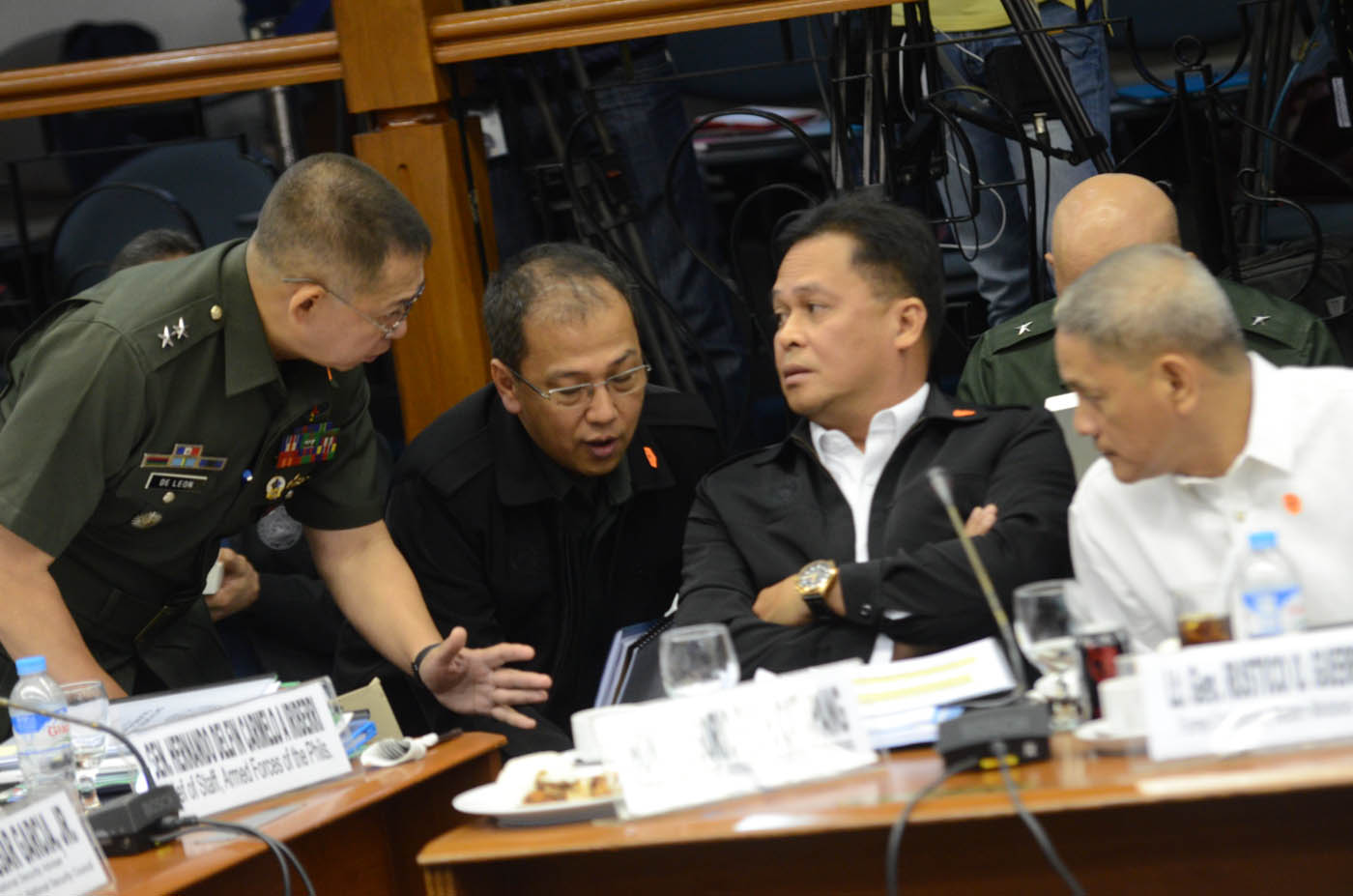 From past 7 am to noon on January 25, Purisima and Aquino exchanged text messages about the operation. Roxas, Gazmin, Catapang, and Guerrero, meanwhile, found out about the operation from different sources. It was Espina who informed Guerrero, his mistah (classmate) from the Philippine Military Academy (PMA) Class of 1981.

“Aquino did not do any effective action as president of the Republic of the Philippines to prevent the barbaric slaying and slaughter of the PNP SAF troopers whom he knowingly and deliberately sent on a dangerous mission” was Enrile’s assertion.

Senator Juan Edgardo Angara, allied with the ruling Liberal Party (LP), asked officials who were with Aquino in Zamboanga if any “stand down” order was handed down. All of them said there was no such order.

In a presentation, the military also explained why it could not give SAF the artillery it needed. It was a repeat of previous assertions – that the SAF did not give the miliary enough information on the day of the operation itself because of the decision not to coordinate prior to the operation.

Asked why the SAF informed the military so late – only after Marwan was killed – and not at jump off or around 2 am, Napeñas cited operational security. Such  information, if leaked, would have allowed their targets to flee during the hours it took SAF troopers to reach Marwan’s hut.

Allies in the Senate asserted that Aquino did not have enough information, sourced mostly from Purisima and other security officials.

But the AFP went one step further in their presentation, pinning the blame solely on Napeñas for crafting a flawed plan, a similar observation by the Senate’s draft committee report and the BOI report.

The AFP said Napeñas was “detached from the reality of the SAF operation” and “unaware of the magnitude of the SAF casualties” at the time of the operation.

Military officials even showed a photo of a smiling Napeñas in civilian attire, supposedly taken past 4 pm on January 25. At that point, the 55th Special Action Company (SAC) had been annihilated while the 84th SAC were still pinned down in Mamasapano.

Speaking to reporters after the hearing, Napeñas insisted the plan was not a failure since Marwan had been killed. He also downplayed the AFP’s presentation, saying it was just the opinion of some officials and not of the military as a whole.

Aquino’s allies were quick to downplay the Wednesday Senate hearing, saying Enrile’s threats of evidence to pin down Aquino were a dud.

(Our question now is: What happened to the exposé Senator Enrile had been promising the media? Nothing new came out of the hearing that we haven’t heard or read before. Even his line of questioning was forced.)

While Enrile alleged that Aquino hid behind Purisima to escape accountability,  Aquino himself has never directly blamed Purisima, his friend, for the botched operation. In public speeches following the clash, Aquino has consistently faulted Napeñas who, he said, “tricked” and “lied” to him.

It took 7 hours, more than 20 resource persons, and endless questioning and revisiting of previously established facts. But in the end, committee head Senator Grace Poe said there was nothing in the hearing that would change the committee’s draft report released last year.

Twenty-one senators signed that report, which has yet to be brought to plenary for discussion. – Rappler.com