Feb 5, 2016 12:35 AM PHT
Facebook Twitter Copy URL
Copied
[EXCLUSIVE] Former SC Justice Conchita Carpio-Morales says of the High Court's decision: 'As an Ombudsman, I was frustrated. Because if I recall correctly, his being ill or sick was never raised as a ground for petition for bail' 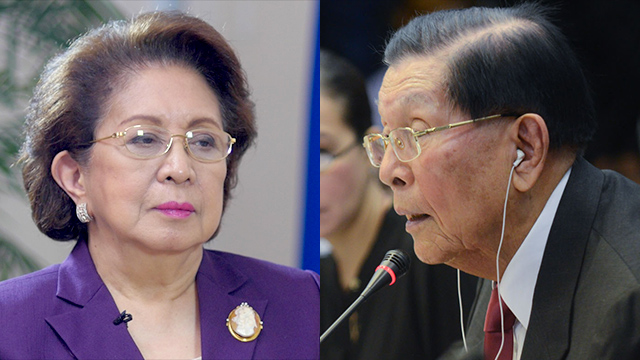 MANILA, Philippines – In more than 4 years of heading the agency tasked to investigate and prosecute erring public officials, Ombudsman Conchita Carpio-Morales considers the Supreme Court’s (SC) granting of bail to Senator Juan Ponce Enrile as the lowest point of her career.

Morales, an associate justice of the High Court before her mandatory retirement and subsequent appointment as Ombudsman, said she was “frustrated” that the 91-year-old Enrile was released on “humanitarian grounds” – a reason which the senator did not even invoke in his petition.

After more than a year under hospital arrest over the pork barrel scam, Enrile was freed in August 2015 after SC magistrates, voting 8-4, allowed him to post bail on humanitarian grounds. (READ: Behind the SC decision on Enrile’s bail)

Enrile and two other senators face plunder and graft charges over the biggest corruption scandal in recent Philippine history. They are accused of pocketing millions in public money and diverting development funds to fake non-governmental organizations allegedly controlled by Janet Lim-Napoles.

The two other senators – Jinggoy Estrada and Ramon Revilla Jr – are currently detained.

In his petition for bail, Enrile argued that he was not a flight risk, and that the prosecution did not establish strong evidence of guilt to deny him bail. He also asked the court to consider “mitigating circumstances” such as his advanced age and voluntary surrender.

Two weeks after Enrile went free, the Ombudsman asked the SC to reverse its decision.

“We certainly opposed, we filed a motion for reconsideration. And it’s still pending. We believe that our position is very strong,” Morales said.

In its September 2015 motion, the Ombudsman said the SC verdict altered “constitutional principles governing the right to bail” by allowing Enrile to be released even in the absence of a bail hearing.

“Persons accused of ‘not bailable’ offenses can only be provisionally released after a previous factual and judicial determination that evidence of their guilt is not strong,” the motion read.

Since his release, the 91-year-old senator has been keeping busy. Just a few days after he posted bail, Enrile went back to work at the Senate, telling reporters he was ready to perform his duty “for as long as I have an ounce of energy.” (READ: Enrile: Too sick for detention, but fit to work?)