EDSA: ‘Hand of God’ seen from the House of Sin 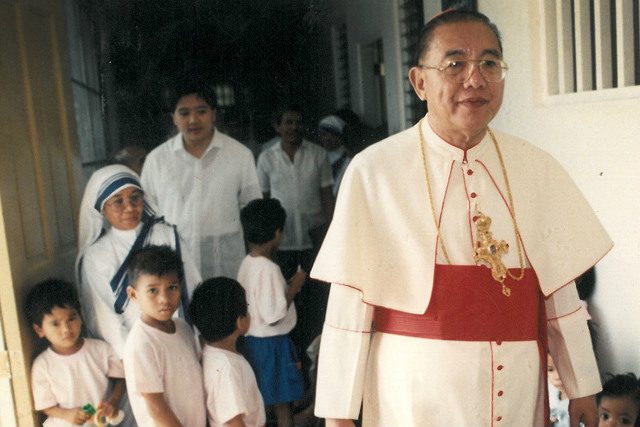 MANILA, Philippines – What if the President orders an attack? What if soldiers bomb the area? What if thousands die, and people blame the man who called them to EDSA?

His boss, after all, did the unthinkable. Sin spoke on radio in the evening of February 22,1986, to urge people to support “our two good friends” in the military headquarters along the main highway EDSA.

Sin told his flock over the church-run Radio Veritas: “If any of you could be around at Camp Aguinaldo to show your solidarity and your support in this very crucial period, when our two good friends have shown their idealism, I would be very happy.”

At that time, Villegas was a 4-month-old priest handpicked by Sin to become his secretary.

A stout figure more than twice Villegas’ age, Sin just looked at his former sacristan and said, “No.”

“I did not know where it was coming from,” Villegas told Rappler, “but he said, ‘It will not happen.’”

True enough, in a way he never imagined, Sin’s appeal on Radio Veritas – along with other factors – sparked a bloodless revolution that toppled Marcos.

This year, the Philippines is marking the 30th anniversary of the peaceful EDSA People Power Revolution that ended on February 25, 1986.

In an hour-long interview with Rappler, Villegas recounted behind-the-scenes stories of People Power from  Villa San Miguel, the Manila archbishop’s residence that was also jokingly called the House of Sin.

Villegas – now president of the Catholic Bishops’ Conference of the Philippines (CBCP) – said it all began on February 22, 1986.

That day, the cardinal received a warning from the famous newspaper publisher Betty Go Belmonte.

Belmonte came to Villa San Miguel to warn Sin “that something was brewing.” She told the cardinal “to be ready about it.”

Keeping this in mind, Sin proceeded to the Loyola School of Theology in Quezon City to ordain Jesuits.

By then, he had already heard on radio that Enrile and Ramos had broken away from Marcos.

Sin, however, “was very cautious and prudent because Enrile was notorious for staging situations to deodorize Marcos.”

Enrile, for one, revealed that his supposed ambush in September 1972 was staged. (Enrile would recant this statement in 2014.) Marcos used this ambush to justify placing the Philippines under martial law that same month.

Villegas said Sin “wanted to be sure” that the defection of Enrile and Ramos “is real.”

Eventually, according to Villegas, Concepcion “was also convinced” that the move of Enrile and Ramos “was a real defection.”

Persuaded too that Enrile and Ramos really defected from Marcos, Sin retreated to his chapel in Villa San Miguel.

He also asked Villegas to call contemplative sisters – or nuns who spend more time in silent prayer – and request them to expose the Blessed Sacrament.

Sin’s instruction to the sisters, in other words, was like putting heaven on red alert.

Later, Sin also asked Villegas to call Radio Veritas. Then, from notes he scribbled on a scratch paper, he issued his historic appeal for people to protect “our two good friends” Enrile and Ramos.

Looking back, the 55-year-old Villegas said the “critical” word in Sin’s message was “friends.”

“When he called Enrile and Ramos ‘friends,’ I think people believed that they needed help,” Villegas said in an interview with Rappler.

Villegas said that after Sin made this announcement, Villa San Miguel became “a nerve center for the Church.”

There, Sin met with bishops and moral theologians, asking them: “In case something happens, what shall we do? In case this turns violent, what shall we support?”

The church leaders decided that in case of an “unfavorable” turn of events, “the Church would have to stand against violence, and out and help the possible victims of violence.”

But it wasn’t only the safety of the public at stake.

On February 23, 1986, Sin learned that Marcos wanted to have him arrested along with other critics of government.

Villegas said they saw documents showing that Sin, among others, “were to be arrested” and secretly brought to Carballo Island, located between the Port of Manila and Corregidor.

The archbishop described it as a “really isolated, God-forsaken island” of rocks.

Having known plans to arrest the cardinal, Villegas asked his boss, “Do you want to go to a safehouse?”

Villegas said the arrest didn’t happen because the Marcos administration was “taken over by events.” He said, “Marcos really lost control of it.”

(Villegas said Sin visited Carballo Island after the EDSA Revolution. The cardinal said in jest, “This would have been our future house!” Asked by Rappler if he was supposed to be arrested along with Sin, Villegas laughed: “I don’t know if the prisoner is entitled to a secretary!”)

Villegas said that was the day when Ramos made his famous “jump” because people thought Marcos had already fled the Philippines. “That was a false alarm.”

On February 25, 1986, Aquino took her oath of office even as Marcos did the same thing.

Later that day, Marcos left the Philippines as the dictator, in the words of the New York Times, was “facing pressure from all sides to step down.”

Like thousands of Filipinos, Sin learned that Marcos fled the country only on TV. Villegas recalled watching this historic moment in the cardinal’s room.

Sin didn’t jump. Neither did he laugh or cry.

Villegas explained that “old-school” priests “hardly show emotions.” He said they’re more likely to just say, “Thanks be to God, so happy,” and then return to prayer.

“We should pray,” Sin told his secretary.

At the same time, Sin remembered the contemplative sisters whom he asked to pray before the Blessed Sacrament.

EDSA ‘not a human plan’

Thirty years later, Villegas laughs about the ice cream – which, as Sin instructed, he sent to the convents the next day. Now the archbishop of Lingayen-Dagupan, he also remains in awe about the “hand of God” during EDSA.

For one, Villegas said it was “practical” to believe – as he did – that Marcos would attack the Filipinos in EDSA.

“That was the practical side, e. This man had faith. He had no explanation for believing, but he just had faith that God will not allow that to happen. God did not allow it to happen,” Villegas said.

He said the turnout was “not a human plan.” (READ: ‘No God, no EDSA,’ says Sin protegé)

“People did not expect that it would turn out that way. I’m sure Enrile and Ramos didn’t expect that Masses would be celebrated at EDSA, and nuns would be putting flowers on the muzzles of the guns. I am sure they did not think about that,” said Villegas.

“There is no logical explanation.” – Rappler.com