Facebook Twitter Copy URL
Copied
The two anti-Marcos leaders were kept in solitary confinement in Fort Magsaysay. The only way 'Delta' and 'Alpha' knew the other was still alive was when one would sing 'Lupang Hinirang' and the other would reply with 'Bayan Ko.'

NUEVA ECIJA, Philippines – Seventy-one-year-old Basilisa “Cely” Tolentino-Ollero is long-retired from her civilian job in the Philippine Army but when someone makes a request, she finds time to tour people around the Aquino-Diokno memorial in Fort Magsaysay.

Ollero was the cook and civilian administrator of the detention facility in Laur when Senators Benigno “Ninoy” Aquino Jr, and Jose “Pepe” N. Diokno were kept in solitary confinement for over 30 days under the regime of the late dictator Ferdinand Marcos.

Ollero led the yellow-clad pair to the different rooms inside the medium-sized bungalow, as curious media personnel tagged along. Instead of a front door, the complex had in its main “entrance” – a wire cage, where the Aquino and Diokno families would first see the detained senators after they were taken from their detention facility in Fort Bonifacio, blindfolded, handcuffed, and flown via presidential chopper to Fort Magsaysay.

For 30 days, the two were confined inside the 1st Military Security Detachment, under tight watch.

Their room were separated by a “buffer room” to make sure that the two – among the most prominent dissenting voices in Philippine politics then – could not communicate with each other.

Ollero still remembers the first – and only time – the families of the two men were able to visit. They were not allowed out of their rooms at the same time, constantly under the watch of soldiers.

The only way Delta and Alpha knew the other was still alive was when one would sing “Lupang Hinirang” and the other would reply with “Bayan Ko.” 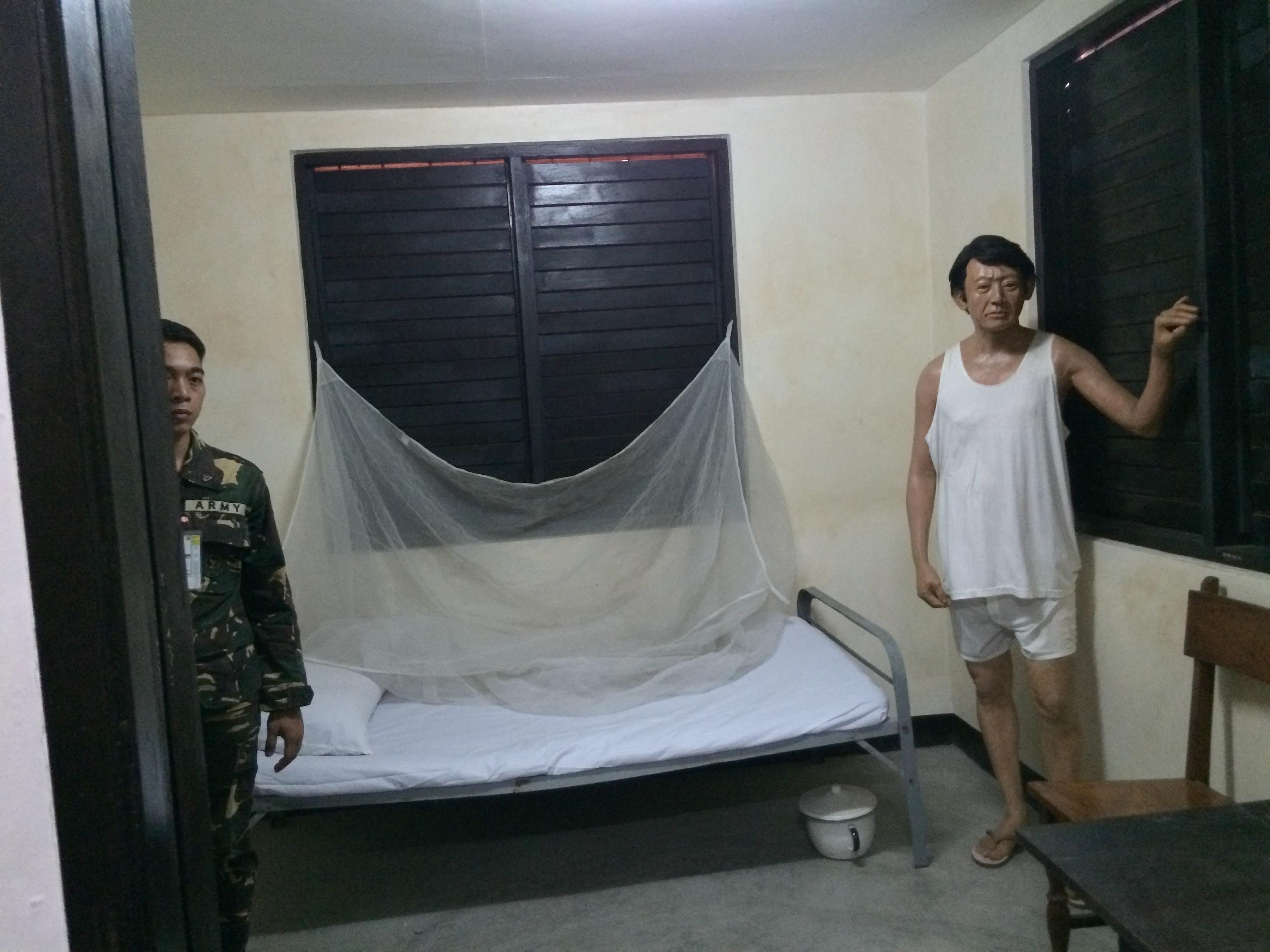 The detention facility’s officer-in-charge happened to be Lieutenant Voltaire Gazmin, Aquino’s godson. The senator was a principal sponsor at the young officer’s wedding.

Gazmin apologized to his ninong, explaining that he was only doing his job. He would later be appointed to key positions – Presidential Security Group (PSG) chief under the Cory Aquino presidency and commanding general of the Philippine Army in 1999. Inside the former detention facility, the atmosphere can be heavy, overwhelming, or downright depressing. The building has been renovated several times in the past, according to Ollero, partly because it was built on unstable soil.

The slightest of tremors can cause cracks on the walls.

President Aquino could not help but remember the time his father and Diokno were confined in Laur. Their families were only allowed to see the political prisoners once.

(When we were finally given the chance to see our father, he couldn’t help but cry, no matter how tough he was. He looked very different. He didn’t have his glasses on, so his head ached frequently. They took away his watch, even his wedding ring. All that was left were two pieces of underwear and two shirts.)

(My father told us then that he kept praying to Mother Mary to give him one last chance to see his family. So when we saw him, he told me right there and then  to look after my mother and my siblings.) The compound in Fort Magsaysay has since been turned into the military’s center for human rights.

Diokno and Aquino were eventually released; the latter had to fly out to the United States for medical treatment and then went on exile with his family. When he returned to the Philippines, he was gunned down on the tarmac of the airport now named after him.

“Isa lang pong alaala ‘yan ng pang-aabuso ng Batas Militar (That’s only one of the many memories of the abuses during Martial Law),” said President Aquino of his father and Diokno’s detention.

(There are many more stories from millions of Filipinos who were victims of violence then. The government which was given the mandate to care for, and serve, its citizens, was the same one who abused them.)

As media men shuffled from room to room, tailing Roxas and Robredo like a swarm of bees, Ollero stepped aside, giving her high-profile guests time to read every placard, and take in all the information the memorial offered.

We asked her why she does what she does, and her answer was simple: “There are wrong notions that have been published before so I told myself: I have to correct this.” – Rappler.com