The strategy behind Duterte-Cayetano ‘message events’ 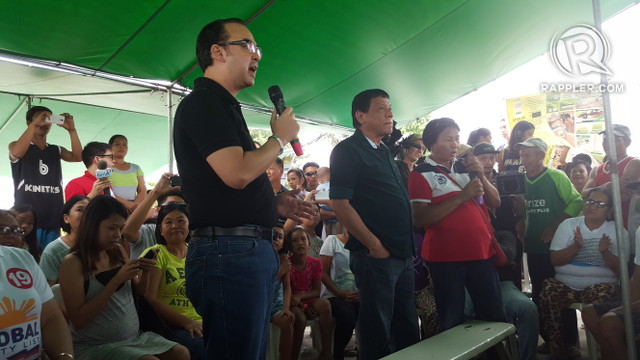 Duterte and Cayetano in a living room in a Pasay City home joking with 6 urban poor women.

Duterte and Cayetano in a shed at the edge of a Tarlac rice field listening to farmers.

These are the so-called “message events” now being used by the tandem to get their platform and message of “true change” across.

Dubbed the “Ronda Serye”, these message events have become a key component of the tandem’s campaign strategy.

Sure, they attend the crowd-drawing rallies and public fora, too. In comparison, the informal powwows may seem underwhelming with an audience of around 10 or 20 persons from a niche sector in society, none of whom are necessarily wealthy or influential.

But what these message events lack in participants, they make up for in air time. Campaign members are noticing that events with heartstring-pulling stories are likely to draw more media attention than just cookie-cutter motorcades and rallies.

Take the message event among the urban poor women in Pasay City. The campaign team made sure to invite a pregnant woman and a mother of street kids to the living room dialogue. Duterte’s platform is focused on public order and safety.

Public relations strategists are hoping to weave a story that will give media more to chew on than just images of handwaving from cars, speeches on stages, and handshaking with locals.

Whatever the intent, you can count on all major news outfits to attend these “creative listening tours.” Cameramen jostled for space in the sauna-hot living room, microphones stacked on a stool near Duterte and Cayetano.

When the pregnant woman spoke, camera lenses turned to her, then back to the candidates.

In the tiny farming village in Tarlac, even an international news channel was present, shooting a standupper as Duterte strode into the tiny shack.

During the Pasay City event, Duterte told the women, “Hindi ako nangangampanya (I am not campaigning).”

But it’s also during these events that the tandem will unveil a new part of their platform. The mandatory health facility for indigents and credit unions for the poor emerged during these message events.

It’s likely this is the strategy for drawing attention to their platform instead of other controversies like the Duterte-Roxas word war which media are bound to ask during ambush interviews.

Lacking the funds and campaign machinery other more seasoned candidates have, the Duterte campaign team is depending on these message events as an alternative form of seizing public attention.

They are other ways the Duterte campaign is making up for lack of resources.

Too strapped for cash to afford a political advertisement during the 1st presidential debate, Duterte’s online supporters came through by making him the most talked about candidate on social media. – Pia Ranada/Rappler.com