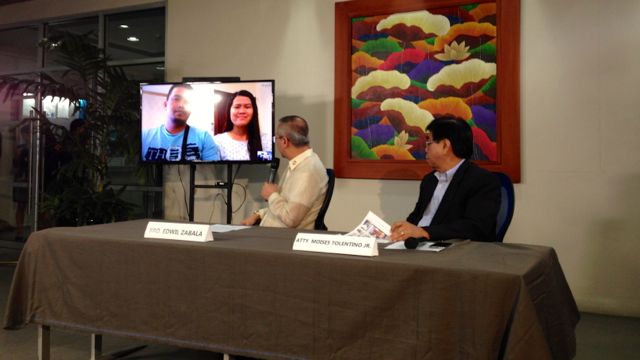 MANILA, Philippines – The Iglesia ni Cristo on Monday, March 7, said that expelled church worker Lowell Menorca II is not missing, but has left the country to escape the cases filed against him in court.

This was the INC’s statement hours after Menorca’s lawyers told the Court of Appeals (CA) that the former evangelical worker was nowhere to be found after supposedly receiving a death threat against him and his family.

In a press conference, INC lawyer Moises Tolentino Jr accused Menorca of choosing to skip his scheduled hearing at the appellate court for fear that “more of his lies and sins would be exposed had he faced the last stage of the scheduled cross examination.”

The CA’s 7th division is hearing the petition for writ of amparo filed by Menorca’s relatives last year.

“Beset by several libel suits and an adultery charge to boot, he took the cowardly option. He took a hurried flight last night bound for Vietnam. He is now a fugitive from justice,” Tolentino said.

Earlier Monday, Menorca’s lawyers asked to reset the hearing, saying they have not been able to contact Menorca since 8 pm on Sunday night.

Lawyer Trixie Cruz-Angeles told the court that Menorca had called them up from the airport, saying he had received a death threat that “scared him so much,” that he had proceeded to the airport “to secure his family.”

Menorca was allegedly held by immigration officials due to a supposed hold departure order against him, but was later told that he could leave.

Angeles, however, said she had “reservations” because he should not have been allowed to go if he indeed had a hold departure order.

They have not been able to reach Menorca or his family since, Angeles said.

During the press conference, INC spokesperson Edwil Zabala spoke on Skype with a couple from Ho Chi Minh, who claimed to have seen the Menorcas at the Ninoy Aquino International Airport and was even on the same 10:45 pm Cebu Pacific flight from Manila to Vietnam.

Zabala said the couple got in touch with INC leaders in Manila after seeing claims on social media that the church was behind Menorca’s supposed disappearance.

“They came forward to say that they knew for a fact that the family left the Philippines, that they were well when they boarded and disembarked,” Zabala said.

The woman, called “Tin,” told Zabala over Skype that they had seen the Menorcas after clearing immigration at the airport. She said that the Menorcas did not seem to be hiding from other people.

During the press conference at the Eagle Broadcasting Corporation in Quezon City, Tolentino slammed Menorca’s camp for making it appear that the influential church was behind his supposed disappearance.

The petition currently being heard at the CA stemmed from Menorca’s claims that he had been abducted and detained by top church officials supposedly to force him to expose members critical of the church. (READ: INC minister Lowell Menorca: The story of my kidnapping)

But Tolentino said that if Menorca truly believed in the merits of his argument to be granted protection through the writ of amparo, he should not have left the country before a scheduled hearing.

“Menorca is supposed to be the aggrieved party. If they were sincere, if they believed that they were in the right, they should not leave the country. They should face all opportunities that should be given to respondents,” he said.

Tolentino said that the Iglesia was being unfairly portrayed as the offender through the accusations being hurled at the 101-year-old church.

He added that the INC camp was ready to continue the cross examination that would expose the “lies, contradictions, and speculations” in his judicial affidavit.

“We were ready this morning, but they robbed us of the opportunity to expose his lies,” Tolentino said.

Because of this, the INC lawyer said they are mulling an option to have Menorca’s judicial affidavit expunged from the records of the case.

“Coming to court with dirty hands, charging innocent people with offenses they did not commit, and then leaving like a thief in the night, Menorca had trifled with our country’s judicial processes and showed no respect to our institutions of justice,” Tolentino said.

“We shall leave it to the court to impose the sanctions he deserves under the rules and we assure you there will be consequences,” he added.

Tolentino also cast doubts on the Menorca camp’s claim that there was a threat against his family, questioning how the Menorcas were able to quickly arrange for their departure seemingly within hours of receiving the supposed threat.

The INC lawyer suggested it was likely that the Menorcas fled because of the slew of libel complaints filed against him.

In January, Menorca spent two nights in jail over two libel complaints filed against him in Mindanao. He also faces an adultery complaint.

His camp said that there were reports of more libel complaints against the expelled church worker, but they maintained that they had not received any formal notice from the courts. – Rappler.com